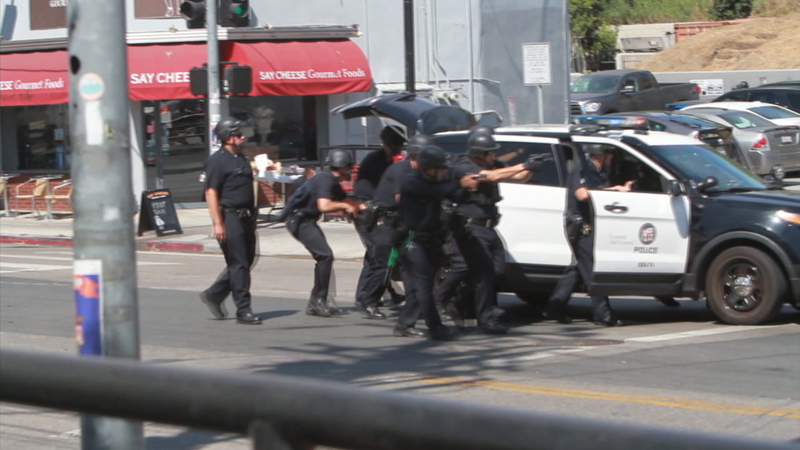 SILVER LAKE, LOS ANGELES (KABC) -- A mother in Montana recalled moments of panic as she watched the Silver Lake Trader Joe's hostage situation unfold while her daughter hid inside the store.

The young woman, named Hadley, was locked inside the store as an armed suspect kept people inside against their will. She had texted her mother, Jane Felt, that she was hiding with a group of people in a barricaded backroom.

"My daughter sent me a text saying, 'There's a gunman in Trader Joe's' and 'I love you, momma.' She said that she was in a backroom, they were hiding from the gunman and she didn't really know what was going on. She had heard the gunshots," Felt said.

She said she felt intense fear and disbelief that her daughter was involved in the situation. Felt watched the ongoing coverage on the ABC7 app. When the situation ended about three hours after it began Saturday afternoon, she saw her daughter coming out with a little boy.

"She came out with this little boy who was in a stretcher. He got separated from his parents, and she stuck with him the whole time. He was with her in that barricaded room," Felt said.

Felt added that the little boy fell during the chaos to get away from the gunfire and suffered cuts to his hands and knees from the broken glass. People in the barricaded room bandaged him up.

The situation unfolded around 3:30 p.m. Saturday after a suspect shot his grandmother and possibly his girlfriend in South Los Angeles.

The suspect led authorities on a chase that ended when he crashed into a pole near the supermarket on Hyperion Avenue in Silver Lake.

The man shot at officers, who returned fire and caused the glass doors of the store to shatter. Possibly during the crossfire, a store manager identified by family as Melyda Corado was shot and killed.

Around 6:30 p.m., the suspect gave himself up to police and the surviving hostages escaped the store physically unharmed, authorities said.