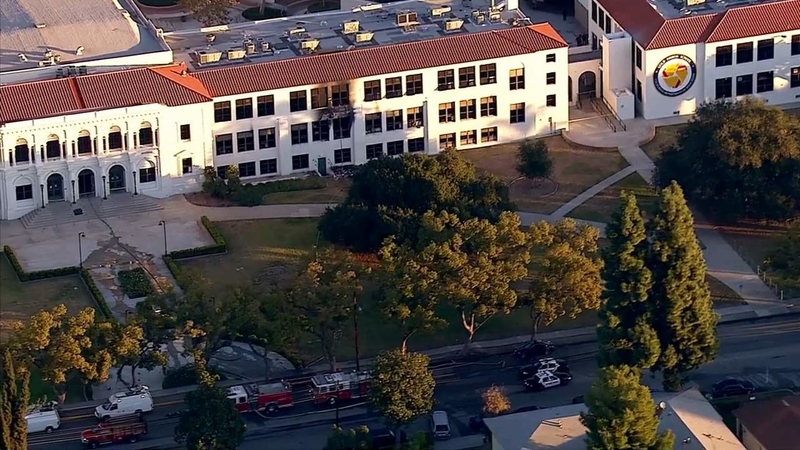 MONROVIA, Calif. (KABC) -- A male student was arrested in connection to a three-alarm fire that erupted inside Monrovia High School early Monday morning.

The blaze broke out around 1 a.m. in the counseling center on the main floor of the school, located in the 800 block of Colorado Boulevard.

The counseling center is near the administration offices, which houses files, student records and other documents.

Monrovia police arrested the 17-year-old student after officers found him hiding in some bushes in the general area of the blaze.

Firefighters knocked down the flames and tried to salvage whatever they could from the structure and save it from water damage.

"I went outside and I was very shocked. I was like, woah, like my school is on fire," said Alyssa Curry, a senior at Monrovia High.

Investigators said the fire appears to be a case of vandalism. Before the fire broke out, someone spotted the suspect throwing objects at the front of the school.

"A citizen heard the sound of glass breaking to the front of the school and immediately notified the Monrovia Police Department," said Lt. Nick Manfredi with Monrovia police.

Officials have not specified what those objects were or how they relate to the fire.

The extent of the damage has yet to be fully assessed. Of particular interest - students' files and records, as many seniors are in the middle of college applications.

"We anticipate there's going to be some damage. We do not know the extent of that damage at this point," said Kirk McGinnis, the school's principal.

The suspect's motives were not immediately known.

"I don't know if the target was intentional at this point," Manfredi said.

With so many questions still to be answered, parents said they felt uneasy about dropping off their kids at school Monday morning.

"You hear so much in the news about school shootings and other things that happen, and it's just a little unnerving as a parent," said Isabel Howser, a parent.