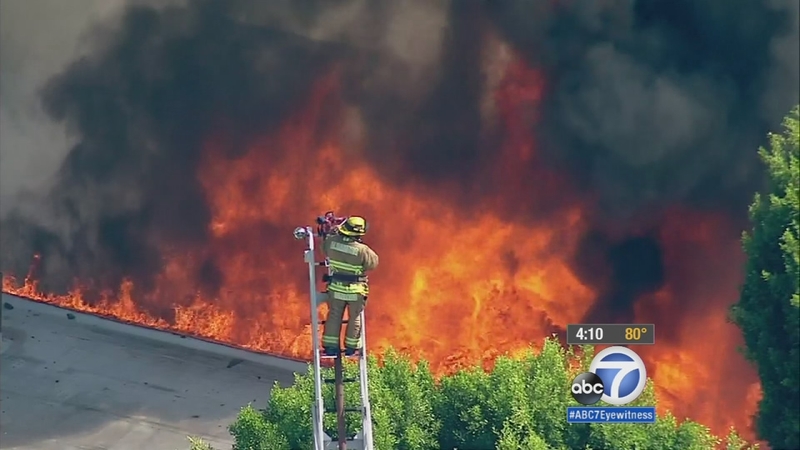 The fourth-alarm blaze was reported at about 7 a.m. in the 100 block of North Moore Avenue near Garvey Avenue. Flames and a huge black cloud of smoke consumed the roof of the strip mall after fire spread through parts of the structure. The stubborn fire also sparked nearby power lines.

Up to 50 firefighters from Monterey Park, Montebello and Los Angeles County fire departments battled the flames for several hours.

Officials believe the fire may have started in one business. Firefighters attempted to get inside the building to battle the blaze, but it was just too intense, and they had to quickly back out and continue their firefight outdoors.

"I believe it's some type of a toy business, so there's a lot of material inside that's on fire, and that's what is making it very difficult to fight the fire from the inside, so we moved outside," said Lt. Carrie Mazelin of the Monterey Park Police Department. "As you can see, they are pouring a lot of water from the ladder. We do not know the origin of the fire."

Fire officials say at least three firefighters suffered heat exhaustion and had to be treated at a hospital.

The fire destroyed a total of eight businesses and damaged three others, according to authorities.

The owner of a wholesale wireless store in the strip mall said she rushed to the scene after receiving a phone call about the fire. She said all of her inventory is likely ruined, but thankfully no one was inside at the time of the blaze.

The extent of the damage and cause of the fire were not immediately known.