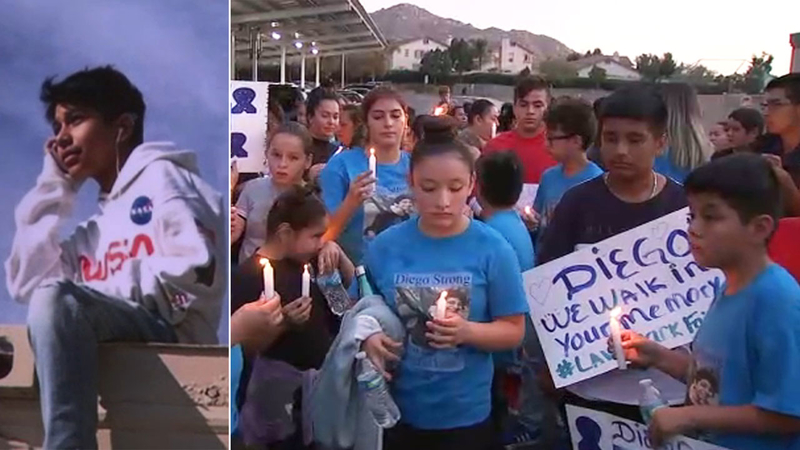 MORENO VALLEY, Calif. (KABC) -- Hundreds gathered at an emotional vigil for a 13-year-old Moreno Valley boy, who died after what authorities said was an attack at school.

A throng of mourners gathered outside Landmark Middle School Wednesday night, many clutching candles and some wearing T-shirts emblazoned with a photo of the teen, who has only been identified as Diego.

While some in the crowd are demanding change, most were there to show support for Diego and his family.

"He was a calm person...hope he can hear us right now, but tell him I miss him," a young boy said into a megaphone speaker, wiping tears away from his eyes.

Two Moreno Valley middle school students have been arrested in connection to a fight on campus Monday that left a boy in critical condition, authorities say.

There were more heartbreaking words from those who called Diego their friend.

"Diego was the most outstanding friend that I had," said another young boy, whose voice wavered with emotion. "We were there for each other. Diego, I'll miss you...to everybody who's been bullied, speak up please. Speak up. Now is your chance."

Parents are asking - what exactly is going to change after Diego's death?

Martinrex Kedziora, the Moreno Valley Unified School District superintendent, made an appearance at the school, drawing screams from many in the crowd, which included upset parents and students. Some in the group called him a coward as he made his way into the school building.

A 13-year-old boy has died just over a week after he suffered critical injuries in an incident that resulted in the arrests of two other students on suspicion of assault.

"Preparations by Diego's family are underway for organ donation to transform this tragedy into the gift of life for other children," the Riverside County Sheriff's Department said in a news release.
His death came more than a week after an on-campus attack that was caught on video.

Two other students who were involved in the incident, which was recorded on video by a bystander, remained in custody following their earlier arrests on suspicion of assault, authorities said. Their identities were not disclosed due to their ages.

"I just pray for Diego and his family and our whole community and also the two boys that's probably going to spend life in jail," said Helen Cotton, a Moreno Valley resident.

Parents are demanding answers from school administrators. They want to know - how can something like this happen?

"Kids been getting bullied and they're not doing anything. We've asked them to change the policies, the rules a little bit more stricter, but that hasn't happened," said Karla Palumbo, a parent.

Earlier in the day, the superintendent told reporters that the school has added extra security, and instances of violence on campus isn't taken lightly by the school.

Anyone with information about the incident is asked to call sheriff's Investigator Joshua Manjarrez at (951) 955-2777.

A memorial ceremony is scheduled to take place at 6 p.m. at Landmark Middle School