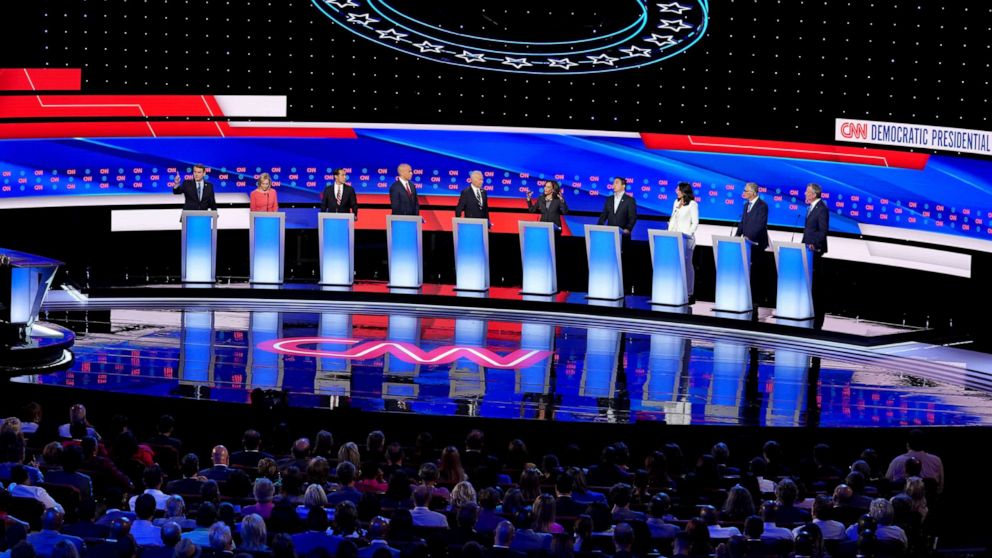 The poll, conducted using Ipsos' Knowledge Panel, asked Democrats and Democratic-leaning independents about the second Democratic debates in Detroit, which spanned two nights, with 10 contenders on each evening's stage.

Despite appearing on different stages, the debates pitted polling-frontrunner Biden -- who seeks to reconcile Obama's signature piece of legislation, the Affordable Care Act, with the party's push to the left -- against liberal Sanders, along with Massachusetts Sen. Elizabeth Warren, who are driving that push.

After being shown two video clips from the debates -- one of Sanders and one of Biden each outlining part of his vision for improving health insurance coverage for millions of Americans, respondents were asked to say if they found each clip very convincing, somewhat convincing, not so convincing or not at all convincing.

The poll found that 58% of Democrats and Democratic-leaning independents thought that both statements from Sanders and Biden were convincing.

Biden's position centers on expanding on the Affordable Care Act: "Obamacare is working. The way to build this and get to it immediately is to build on Obamacare. Go back and do, take back all the things that Trump took away, provide a public option, meaning every single person in America would be able to buy another option if they didn't like their employer plan or if they're on Medicaid they would automatically be in the plan. It would take place immediately and move quickly and it would ensure the vast, vast, vast majority of Americans," he said in the video clip shown to respondents.

Sanders' stance reflects his "Medicare for All" plan, which he introduced in the Senate, and has become a dividing line for the Democratic contenders.

"The fact of the matter is, tens of millions of people lose their health insurance every single year when they change jobs or their employer changes that insurance," the Vermont senator said in the clip shown. "If you want stability in the health care system, if you want a system which gives you freedom of choice with regard to a doctor or a hospital, which is a system which will not bankrupt you, the answer is to get rid of the profiteering of the drug companies and the insurance companies, move to Medicare for all."

But more Democrats and Democratic-leaning independents -- 31% -- thought of the Sanders' clip as very convincing, compared to only 18% who said the same of the Biden video.

In this early stage of the primary, about two-thirds of Democrats and Democratic-leaning independents said they didn't watch any of the nationally-televised debates.

The presidential hopefuls are still six months out before the first voters cast their ballots in the Iowa caucuses in February -- leaving them with ample time and opportunity to hammer out their differences on the campaign trail and on more debate stages.

This year's third Democratic primary debate will be hosted by ABC News in partnership with Univision and is scheduled for Sept. 12 and 13 at Texas Southern University, a public, historically-black university in Houston. So far, only eight candidates have qualified for those debates, based on an analysis by ABC News of polling and donor numbers.

This ABC News/Ipsos poll was conducted by Ipsos Public Affairs' KnowledgePanel Aug. 2-3, 2019, in English and Spanish, among a random national sample of 640 Democrats and Democratic-leaning independents. Results have a margin of sampling error of 4.3 points, including the design effect. See the poll's topline results and details on the methodology here.
Report a correction or typo
Related topics:
abc newsnational
Copyright © 2020 ABC News Internet Ventures.
More Videos
From CNN Newsource affiliates
TOP STORIES