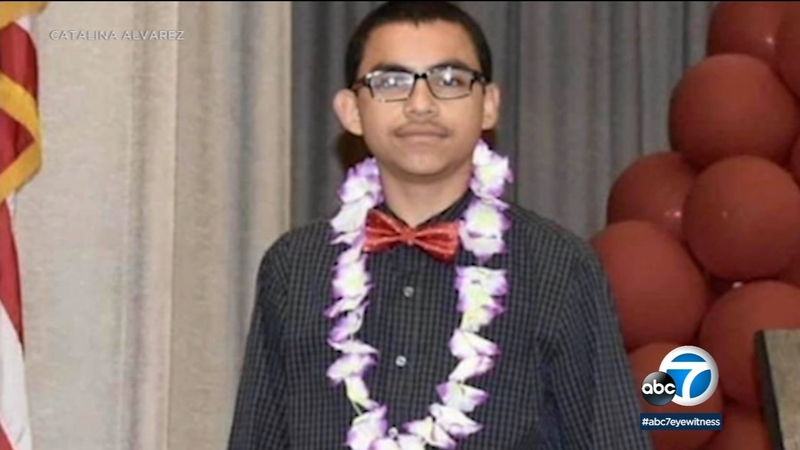 POMONA, Calif. (KABC) -- A candlelight vigil was held in Pomona late Sunday afternoon in honor of a 16-year-old boy who authorities say was abused, tortured and killed, allegedly by his stepmother.

Family and friends, devastated by the death of young George Almaraz, spoke out against child abuse during the vigil, which was held outside the apartment complex where George had been living.

The boy died on June 1, according to the Pomona Police Department. His stepmother, 35-year-old Jessica Paola Grajeda, was arrested on suspicion of murder and multiple counts of child abuse. Her bail was set at $2 million.

"It's not fair that he didn't take care of my son like he said he would," Catalina Alvarez, the boy's biological mother, said at the vigil. "And what she said -- she said he was good here with her. They made me believe that he was in good hands, when he wasn't."

Authorities say a Pomona woman abused, tortured and then killed her 16-year-old stepson, while the boy's father did nothing to prevent the abuse.

Alvarez, who lives in New Mexico, said she is now seeking justice for her son.

Five other children who were living in the same home as young George Almaraz were taken into protective custody by the Los Angeles County Department of Children and Family Services.

"She's a monster. She's not a stepmother. You don't treat kids like this. He's 16 years old. He had a future ahead of him," neighbor Phillip Sayegh said last week, referring Grajeda. "That life was taken, and justice needs to be served and delivered to that kid."