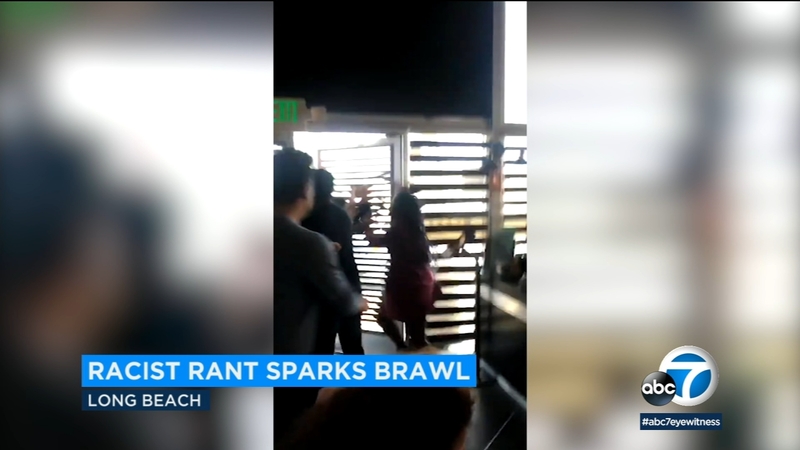 LONG BEACH, Calif. (KABC) -- A Mother's Day melee at a Long Beach restaurant was caught on camera as a man hurled racial epithets at other customers and then was punched several times by a woman as he was thrown out the door.

Other customers applauded after the woman struck the man and he was escorted out of the sushi restaurant.

The disturbance happened Sunday at the Aburi Sushi in Long Beach.

"It was wild," said Ivan Velasco, who captured the incident on video. "As soon as she punches him it's like is this really happening?"

The man was apparently angry about the long wait time for his table on the holiday. He began arguing with and shouting at the staff and then other customers became involved in shouting back at him.

He then started cursing and using racial terms and challenging the other customers.

"The remark he says is 'monkey man.' At the moment you felt the pressure in the room escalate immediately," Velasco said. "He didn't just say it once, he said it about four or five times. He shouted it back and forth. You see him doing some chimpanzee gestures as he's saying that."

As customers and staff try to usher him out of the restaurant, he charges back in. That's when one of the women who was trying to restrain him started throwing punches.

Eventually the man was escorted out of the restaurant.

The restaurant called Long Beach police. Officers cited both the angry customer and the woman who hit him for battery.

The woman was even handcuffed and placed in a police car. But as other customers began telling investigators what happened, she was let go with just a citation.