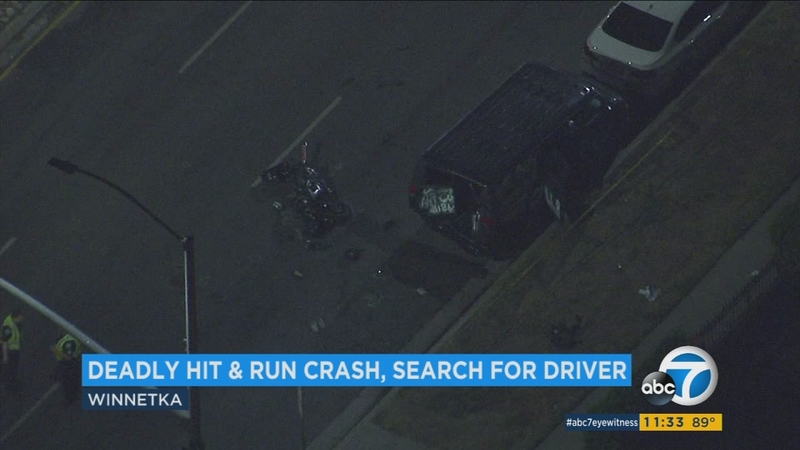 WINNETKA, LOS ANGELES (KABC) -- A motorcyclist who was gravely injured in a multi-vehicle crash in Winnetka has died. Now, the search is on for a driver who fled the scene following the wreck.

At around 8:30 p.m. Tuesday, a black sedan, possibly a BMW with tinted windows and dark rims, was traveling westbound along Sherman Way at Oakdale Avenue.

The car turned left onto southbound Oakdale Avenue, where it slammed into the motorcyclist, who was traveling eastbound on Sherman Way.

The impact of the crash caused the motorcyclist to careen into a parked van along Sherman Way, east of Oakdale Avenue along the south curb.

The motorcyclist ended up inside the van and had to be extricated. He was transported to a local trauma center, where he later died.

The driver of the sedan stopped momentarily but left the scene without rendering aid to the motorcyclist.

Officials were expected to announce a $50,000 reward to help track down the hit-and-run driver, who was described as a male in his late 20s or early 30s.

The identity of the motorcyclist was withheld pending notification of next of kin.

The motorcycle crash triggered a chain reaction, which caused two other vehicles to collide in the intersection. It was not known if anyone in those cars were injured.

If you have with information about this incident, you're urged to call Detective William Bustos at (818) 644-8021 or Detective L. Fuentes or Detective J. Avila at (818) 644-8034. You can also submit anonymous tips by calling Crime Stoppers at 800-222-TIPS.
Report a correction or typo
Related topics:
winnetkalos angelescar crashhit and runsearchlapdcrash
Copyright © 2021 KABC-TV. All Rights Reserved.
RELATED 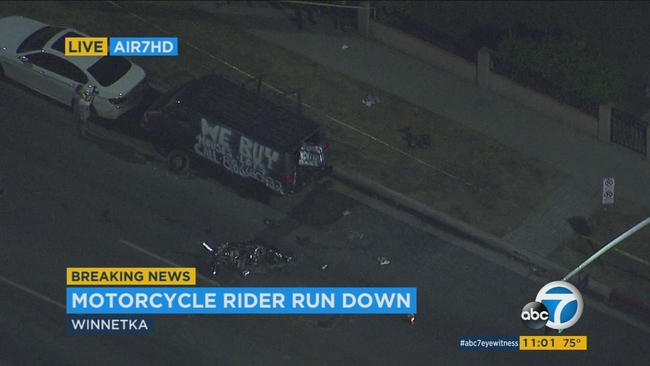