Mountain lion, P-41, first to be tracked in Verdugo Mountains 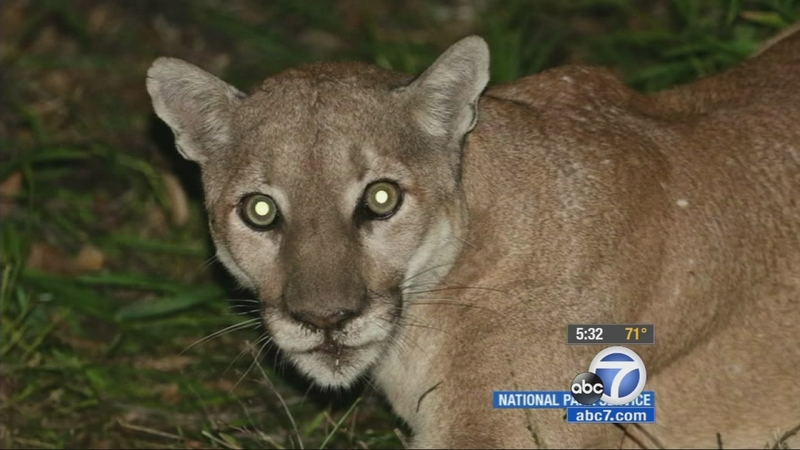 Mountain lion, P-41, first to be tracked in Verdugo Mountains

GLENDALE, Calif. (KABC) -- An 8-year-old mountain lion, dubbed P-41, is the first of his kind to be fitted with a tracking device in the Verdugo Mountains, a small range north of downtown Los Angeles.

National Park Service biologists found and captured the animal on May 7 after amateur scientists caught him on camera. The GPS tracking collar will provide researchers with valuable data on the mountain lion's struggle for survival as it's surrounded by busy freeways.

"We capture the animal on site. We take blood and tissue samples. We place a GPS collar on the animal so we can learn more about him and his movements," said Kate Kuykendall with the National Park Service.

P-41 is estimated to be an adult male weighing 130 pounds.

People hiking in the mountains were surprised he existed.

"I don't know where he's coming from. 'Cause I never heard of anything like that here in these mountains," Glendale resident Kenny Miranda said.

The National Park Service has been studying the behavior of mountain lions for more than a decade, including P-22, the mountain lion who has made Griffith Park his home.

"We imagine what we'll find is that his DNA is going to look very different than an animals that are just a few miles away in the Santa Monica Mountains," Kuykendall said.

Cougars are solitary creatures and rarely have been known to cross freeways. Researchers are waiting to see what P-41 does.