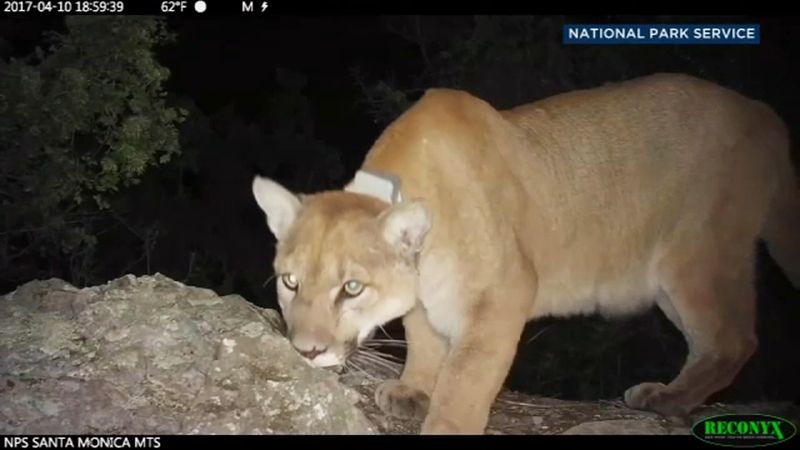 LOS ANGELES (CNS) -- Newly published research indicates there's an almost one-in-four chance the mountain lions living in the Santa Monica and Santa Ana mountains could become extinct in those areas within 50 years as a result of urban encroachment, inbreeding, vehicle strikes, rat poison and wildfire, it was reported Wednesday.

In the face of such a dire prognosis, what biologists call an extinction vortex, conservationists are considering a desperate and controversial remedy: capturing pumas in one part of the Santa Anas and trucking them across the 15 Freeway so that they can breed with isolated mates on the other side of traffic.

"Wildlife managers never want to be a shuttle service for wild animals,'' said Justin Dellinger, senior environmental scientist with the Wildlife Investigations Laboratory at the California Department of Fish and Wildlife, the Los Angeles Times reported.

But translocation has potential merit in the short term; after all it helped bring the critically endangered Florida panther back from the brink.

Mountain lions are not endangered in California, but groups living in the Santa Monica and Santa Ana ranges now find themselves in genetic peril. Separated by freeways and lethal traffic, they are unable to range freely and are growing increasingly inbred, researchers say.

Sometimes, the animals manage to cross freeways without getting hit. At least seven cougars have crossed the 15 Freeway near Temecula in the last 15 years, and one sired 11 kittens. The fact that only one managed to reproduce, however, shows how difficult it is to diversify the gene pool in the lions still prowling the range.

A population viability study published in the journal Ecological Applications predicts extinction probabilities of 16 to 28 percent over the next 50 years for these lions, which have the lowest genetic diversity documented for the species aside from the critically endangered Florida panther.