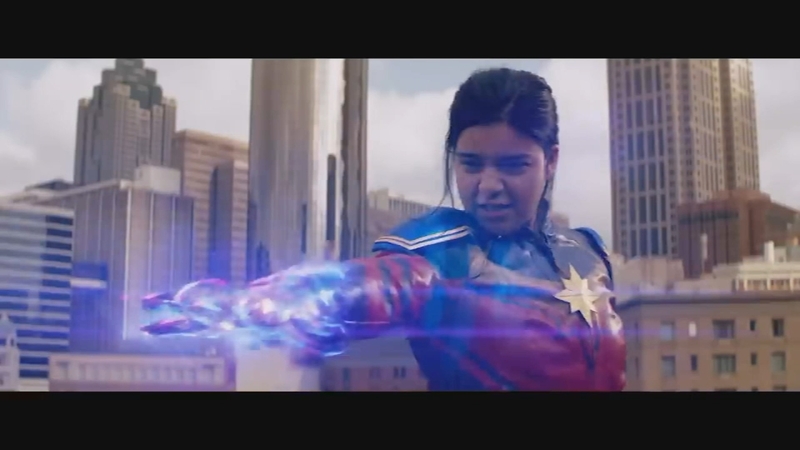 A 16-year-old Pakistani American from Jersey City struggles to fit in, until Kamala Khan discovers her cosmic superpower and becomes "Ms. Marvel."

The new limited series for Disney+ is now streaming.

The teenager who plays the title character had never acted onscreen before, but Iman Vellani found her way -- and it helped she'd discovered Ms. Marvel as a young teen reading Marvel comics.

"She was so different from Muslims I'm used to seeing in mainstream media, you know?" she said. "She was proud of her culture. It wasn't something that held her back. It was something that drove her and really motivated her."

"Ms. Marvel" is set to launch on Disney+, and much of the action is set in a school inspired by Jersey City's Dr. Ronald McNair Academic High School. Toni Yates has more.

If you consider how the character inspired Vellani, then the young performer seems the perfect person to play her.

Sana Amanat created the character and says she breathed a sigh of relief when Vellani was discovered.

"She's kind of everything I hoped Kamala would be," Amanat said. "I've been so close to that character for so long, and when I met Iman, it was just like, there's nobody else but her."

When viewers first see Khan in episode #1, she's a super fan of "The Avengers" and looking to attend a comic convention, even though her parents disapprove.

Things get even more complicated when she sneaks out of her house to go to the venue where the event is being held, which is when she discovers her powers -- although she must learn to control them.

Vellani credits the Disney+ show with helping her re-connect with her own heritage.

"The fact that I got to re-experience being Pakistani and Muslim and be proud of that part of myself, I want people to kind of re-connect with their own roots," she said.

She was cast on her last day of high school.

"Like a week later, Brie Larsen called me," Vellani said.

That would be the same Brie Larson who stars as Captain Marvel.

"We just talked for hours, and she was sharing all these incredible experiences with me and kind of prepping me for what these next few years are going to look like," Vellani said.

"It was like a comic book was holding up a mirror in front of me." Newcomer Iman Vellani plays the title role in "Ms. Marvel," a character the actress has loved since childhood for it's groundbreaking, inclusive look at the world.

Larson's time in the MCU (Marvel Cinematic Universe) has transformed her career, and Vellani is set to play Ms. Marvel on the big screen soon.

"The scale is enormous, and so she's like, 'Honestly, it always feels like it's kind of happening to someone else,'" Vellani said. "And just hearing the fact that she's also feeling the same way I do, and that's it's never going to feel super normal, kind of comforted me."