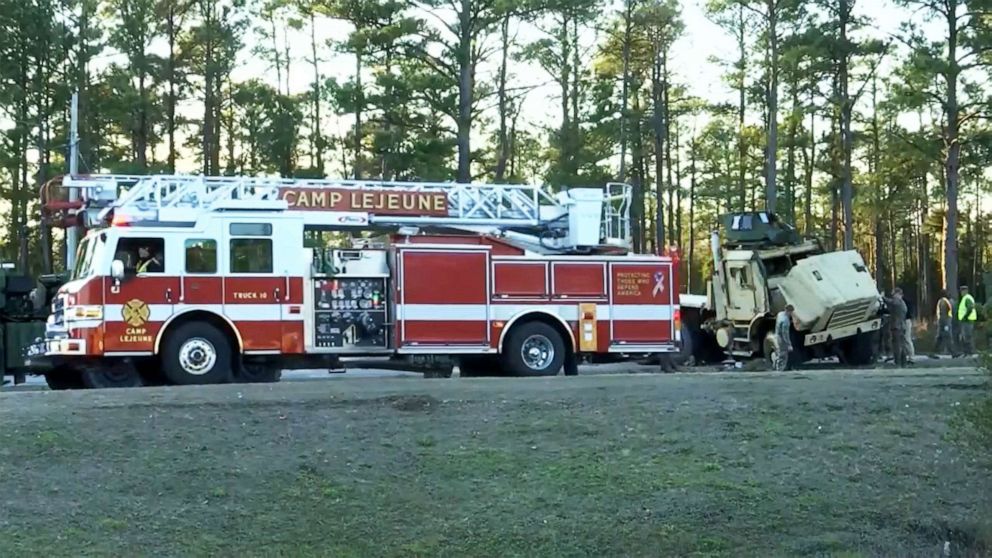 Two Marines have been killed and more than a dozen injured in a rollover accident Wednesday near Camp Lejeune in Jacksonville, North Carolina, according to officials.

Seventeen Marines were injured in the accident after they were ejected from the back of the 7-ton military vehicle as it tried to make a turn onto a highway just miles from the base at about 1 p.m., according to the North Carolina Highway Patrol. Two of the injured were airlifted to Vidant Medical Center in Greenville, while the other 15 were transported on the ground.

The 19-year-old Marine who was driving the military vehicle, Louis Barrera, has been charged with exceeding a safe speed and two counts of misdemeanor death by motor vehicle, according to the highway patrol.

One Marine who was ejected from the truck was hit by another military vehicle trailing the accident, police said.

The vehicle was carrying 19 Marines total, all from the 2nd Marine Logistics Group, stationed at Camp Lejeune. The driver, Barrera, and passenger in the front of the vehicle were uninjured.

Officials will release the identifications of the victims once next of kin have been notified.

An investigation into the accident is ongoing, the North Carolina Highway Patrol said.

North Carolina Highway Patrol Sgt. Devin Rich said at a press conference he was not sure if this was part of a training mission.

The 2nd Marine Logistics Group had initially posted on Twitter, "We are aware of a vehicle rollover in Jacksonville, North Carolina, involving service members with 2nd MLG. We are working closely with @camp_lejeune and Onslow County officials to gather details regarding this incident."

Camp Lejeune is located in southeast North Carolina along the Atlantic coast. It is home to more than 30,000 people.