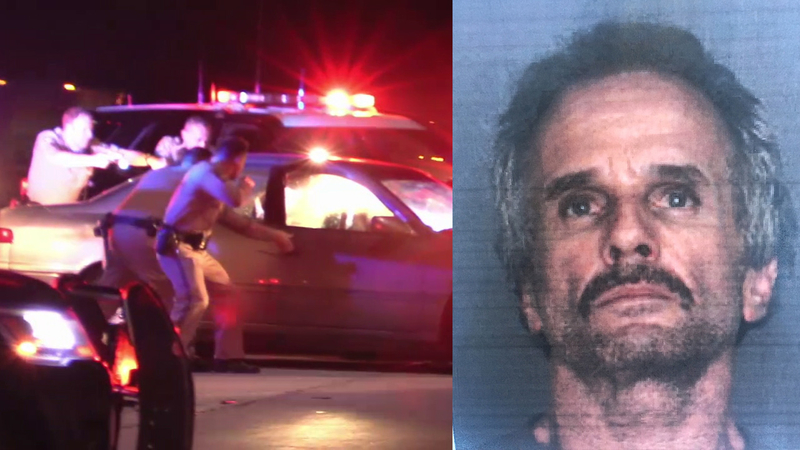 UPLAND, Calif. (KABC) -- A 58-year-old homicide suspect led authorities on a high-speed chase and was arrested Tuesday night after a woman was shot and killed in a possible domestic dispute in Upland, authorities said.

"The suspect and the victim have been having an ongoing dispute for quite a while, it sounds like," police Lt. Marcelo Blanco said, discussing what may have been the motive for the shooting.

"The suspect was possibly having relationships with the victim's daughter. We believe that she is pregnant," the lieutenant said. "There is some ambiguity as to whether that is his child or not, and if that is what the incident revolves around."

Thomas Hill, an Upland resident, was booked into the West Valley Detention Center in Rancho Cucamonga on suspicion of murder, according to a news release.

Officers responded shortly before 8 p.m. to 911 callers' reports of a "female down" in the 700 block of Ukiah Way, authorities said in a statement. Police arrived to find a shooting victim in an alley.

The woman was rushed to San Antonio Regional Hospital, where she died, the Upland Police Department said. Her identity was not immediately released.

At about 11:40 p.m., Hill was spotted driving his vehicle near the crime scene, the news release said. A lengthy chase ensued after he allegedly refused to pull over. The California Highway Patrol took over the pursuit and apprehended Hill some 100 miles northwest of Upland, along the 5 Freeway near Gorman.