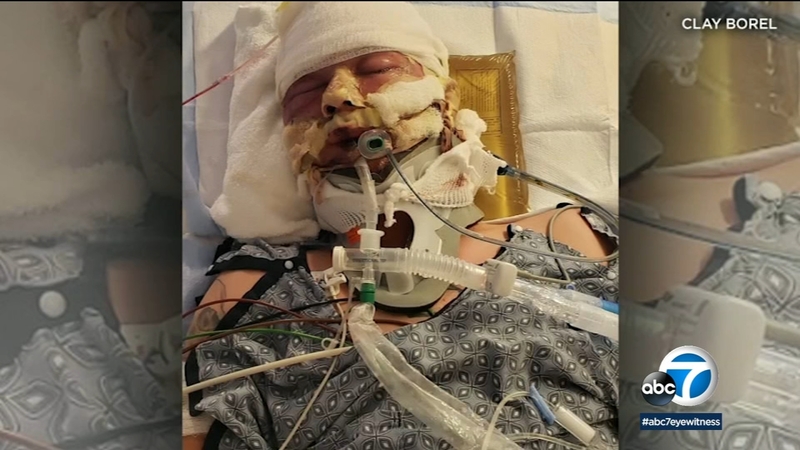 MURRIETA, Calif. (KABC) -- An explosion linked to a natural gas leak destroyed a home in Murrieta in July, killing a gas company employee and injuring 15 others.

Now the father of a man who was severely injured in the explosion is demanding answers.

Clay Borel's son Anthony suffered injuries in the explosion which will stay with him for the rest of his life.

It was so bad the 24-year-old can't even remember what happened that day.

But Clay certainly does.

"He was in pretty bad shape," Clay said. "I could see the cuts, and his head, and his face, legs, burned real bad on his arms, legs and face."

Clay Borel says his son was flown to to Arrowhead Regional Medical Center and was in a medically-induced coma for days.

"The doctor came in and told me they were going to have to drill three holes in his head," he recalled.

"And that was a really scary point for us, because we didn't know what was going to happen at that point."

Borel says his son was one of several employees for Horizon solar power working on the home that day before the explosion.

According to Murrieta fire and rescue, the timeline went like this:

Shortly after noon, people were still on scene.

Only a few minutes later - the explosion ripped apart the home.

"When there's a leak, the first thing you need to do is move people away from the blast zone," said attorney Michael Jeandron, who represents the Borel family. "If you do that, no one's injured in this case."

Jeandron and Borel want to know why people were still so close to the threat, more than an hour after it was reported.

"That's enough time to say hey, move to the other side of the street, get out of the blast zone, while we figure out what's going on, so we can eliminate the threat."

The website for SoCalGas says if you suspect a natural gas leak, immediately evacuate the area.

The company didn't answer specific questions about what their employees did at the scene, only that the investigation remains ongoing, and that they regularly review their policies and procedures.

Eyewitness News asked Murrieta Fire and Rescue about whether an evacuation order was discussed, and they sent us this statement:

"Each unit has an emergency response guidebook published by U.S. DOT that provides guidelines for all types of hazardous products. A second investigation/post event analysis we're conducting is looking into what was discussed at the incident."

Clay Borel is just thankful so many people helped out at the scene. If they didn't, who knows if his son would even be alive.