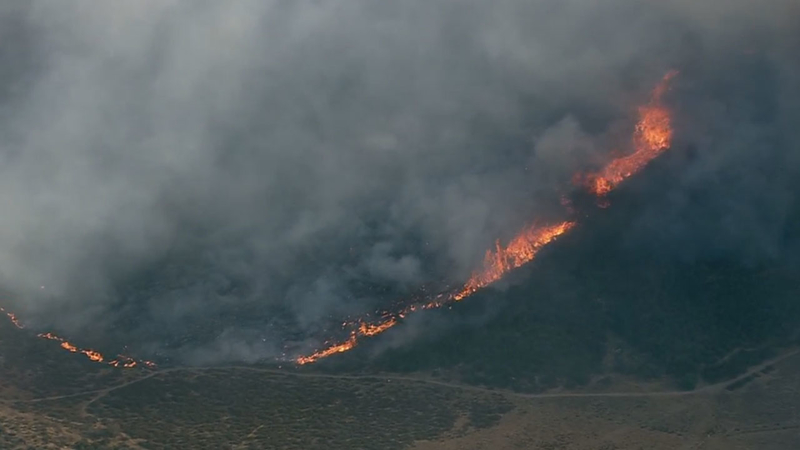 All evacuations lifted for 300-acre Liberty Fire in Murrieta

MURRIETA, Calif. (KABC) -- A brush fire that broke out in an unincorporated area of Murrieta in Riverside County Thursday charred 300 acres and destroyed one home, Cal Fire officials said.

The blaze was holding its acreage and was 60 percent contained by Friday morning, Murrieta fire officials said.

#LibertyFire
Murrieta Fire & Rescue is providing the following updated information to the Liberty Fire. The next update on the Liberty Fire will at approximately 0800hrs.
•Fire is currently estimated at 300 acres, 60% contained, 1 structure and 6 outbuildings have been lost. pic.twitter.com/iNTf358YLt

Six outbuildings were also destroyed in the fire. A home situated on a ridge could be seen burning from the air. Witnesses near the scene said they could hear the sound of propane tanks exploding at residences in the distance.

A brush fire that broke out in an unincorporated area of Murrieta in Riverside County Thursday charred 300 acres and destroyed at least one home, Cal Fire officials said.

One woman, Lauren Fuga, said she watched part of her own home burn right before her eyes.

"I just, I'm at a loss for words," she said through tears. "It's so horrible. You never think that it's going to happen to you, and it can."

The blaze, dubbed the Liberty Fire, was reported around 1:14 p.m. near Los Alamos Road and Liberty Road and was initially sized up at 20 acres, according to fire officials.

As a precaution, all 20 campuses within the Murrieta Valley Unified School District are closed Friday, and all school events and activities are canceled.

Evacuation orders were lifted in all areas by noon Friday.

Hundreds of firefighters were battling the blaze on the ground and with aerial units.