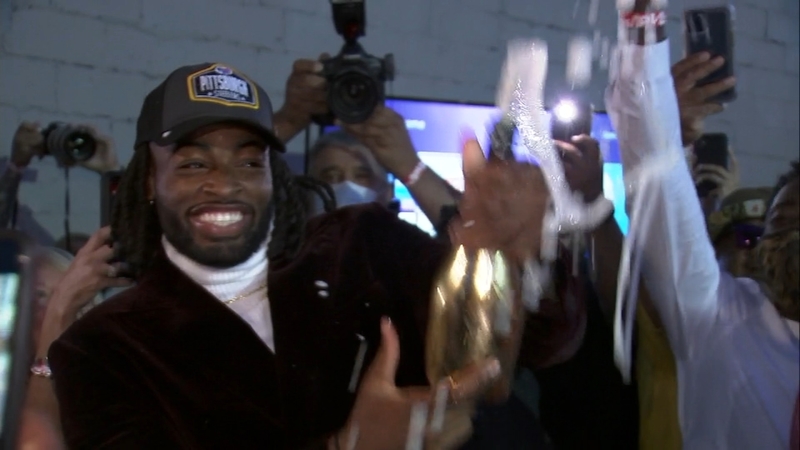 OAKLAND, Calif. -- Night one of the 2021 NFL Draft didn't just prove to make for a great night, but an "amazing" night according to Najee Harris. The star football player was a running back for the University of Alabama and was 24th pick overall by the Pittsburgh Steelers.

Harris celebrated after the call came and after he heard these words from NFL Commissioner Roger Goodell, "The Pittsburgh Steelers select Najee Harris."

Our sister station KGO-TV in San Francisco was there as Harris was surrounded by family and friends in Emeryville, California. In fact, at one point it was so busy that he took the call he got from the Steelers outside.

Harris was just 12 years old he spent time living in a homeless shelter.

"It's all in God's plan, you know my roots will always be in the Bay Area but you know obviously," Harris said.

A humble Harris was interrupted by champagne showers during the interview. Friends and family keeping the celebration going.

Earlier in the day, Najee spoke about the challenges that many kids face growing up, ones that he was able to overcome.

Two days down, yet the NFL Draft is only half done and there are still plenty of celebrated college players available to be picked.

"Just all the little kids out there going through the same stuff, I want to tell them that there are people in your same position and there is light at the end of the tunnel," he said.

KGO asked the future Pittsburgh Steeler if he was nervous as the clock kept on ticking without a call.

"I was getting hella nervous. Anytime you see that, and the trade-ups happening, the other teams picking other players you know, and then running backs not getting picked in the first round. Kind of scary, but like I said finally happened at the end of the day, it all worked out how it was planned," said Harris.

Najee isn't wasting time either. He's headed to Pittsburgh on Friday. He said he wanted to give one message to kids out there who might be watching.