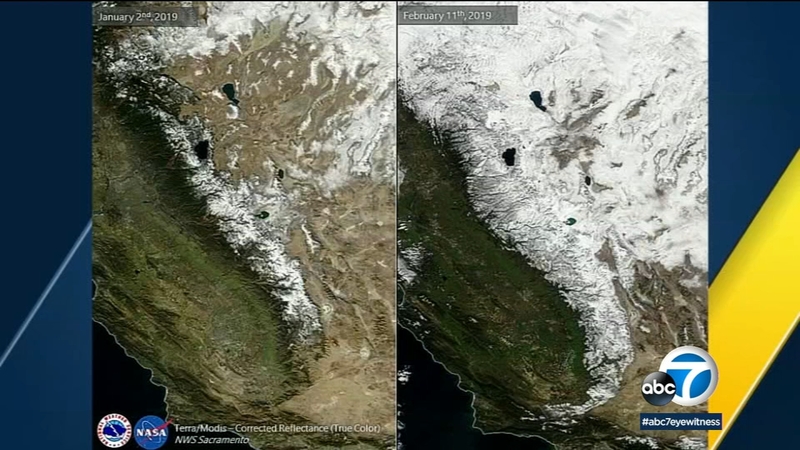 NASA shows CA snowpack that can be seen from space

LOS ANGELES (KABC) -- NASA released satellite images of the immense amounts of snow California has received from the winter storms this year.

One photo shows the snowpack at the beginning of the year. The other image is of the snowpack from earlier this week, which shows a heavier amount of the powder.

The recent storms have brought on intense amounts of rain and snow, and more is on the way.

The side-by-side photos show more extensive snow cover in 2019, and a greener landscape on the western slopes of the Sierra Nevada.

The Sierra Nevada is really living up to its name “snowy mountain range” this year 🏔. With snow reports coming in feet & snow storms still moving in, it’s now home to the snowiest ski resort in the U.S. Our @NASAEarth satellites captured its 2019 look: https://t.co/OKycnJWwI0 pic.twitter.com/zKqPOQvCa3

California Department of Water Resources statistics show that the Sierras had a snow water equivalent that was 130 percent of normal as of February 11, 2019.

It was just 44 percent of normal on Thanksgiving 2018.