Shelter, fuel, food, medicine, power, news, workers - Nepal's earthquake-hit capital was short on everything Monday as its people searched for lost loved ones.

KATHMANDU, Nepal -- As the death toll from Nepal's devastating earthquake climbed past 4,000, aid workers and officials in remote, shattered villages near the epicenter pleaded Monday for food, shelter and medicine.

Help poured in after Saturday's magnitude-7.8 quake, with countries large and small sending medical and rescue teams, aircraft and basic supplies. The small airport in the capital of Kathmandu was congested and chaotic, with some flights forced to turn back early in the day.

Buildings in parts of the city were reduced to rubble, and there were shortages of food, fuel, electricity and shelter. As bodies were recovered, relatives cremated the dead along the Bagmati River, and at least a dozen pyres burned late into the night.

Conditions were far worse in the countryside, with rescue workers still struggling to reach mountain villages two days after the earthquake.

Some roads and trails to the Gorkha district, where the quake was centered, were blocked by landslides - but also by traffic jams that regularly clog the route north of Kathmandu.

"There are people who are not getting food and shelter. I've had reports of villages where 70 percent of the houses have been destroyed," said Udav Prashad Timalsina, the top official for the Gorkha region.

World Vision aid worker Matt Darvas arrived in the district in the afternoon and said almost no assistance had reached there ahead of him.

Newer concrete buildings were intact, Darvas said, but some villages were reported to be devastated. He cited a "disturbing" report from the village of Singla, where up to 75 percent of the buildings may have collapsed and there has been no contact since Saturday night.

In the villages that have been reached, World Vision said the greatest needs were for search-and-rescue teams, food, blankets, tarps and medical treatment.

Timalsina said 223 people had been confirmed dead in Gorkha district but he presumed "the number would go up because there are thousands who are injured."

He said his district had not received enough help from the central government, but Jagdish Pokhrel, a clearly exhausted army spokesman, said nearly the entire 100,000-soldier army was involved in rescue operations.

"We have 90 percent of the army out there working on search and rescue," he said. "We are focusing our efforts on that, on saving lives."

Nepal's Home Ministry said the country's death toll had risen to 4,010. Another 61 were killed in neighboring India, and China's official Xinhua News Agency reported 25 dead in Tibet. At least 18 of the dead were killed at Mount Everest as the quake unleashed an avalanche that buried part of the base camp packed with foreign climbers preparing to make their summit attempts.

At least 7,180 people were injured in the quake, police said. Tens of thousands are estimated to be left homeless.

Rescue workers and medical teams from at least a dozen countries were helping police and army troops in Kathmandu and surrounding areas, said Maj. Gen. Binod Basnyat, a Nepal army spokesman. Contributions came from large countries like India and China - but also from Nepal's tiny Himalayan neighbor of Bhutan, which dispatched a medical team.

Two teams of U.S. Army Green Beret soldiers happened to be in Nepal when the quake struck, and the 26 Americans - who were training with the Nepalese army - are staying to help with search-and-relief efforts. The 11-member crew of a C-130 cargo plane that brought them also will remain to evacuate any American citizens if needed, said Col. Steve Warren, a Pentagon spokesman. A second U.S. cargo plane carrying members of a Los Angeles urban search-and-rescue team was due to arrive Tuesday, he said.

Medical and rescue teams from Russia, Japan, France, Switzerland and Singapore were expected in Kathmandu over the coming days, the Nepal army said.

"We are appealing for tents, dry goods, blankets, mattresses, and 80 different medicines that the health department is seeking that we desperately need now," said Lila Mani Poudyal, Nepal's chief secretary and rescue coordinator. "We don't have the helicopters that we need or the expertise to rescue the people trapped."

As people are pulled from the wreckage, he said, even more help is needed, including orthopedic doctors, nerve specialists, surgeons and paramedics.

"We are appealing to foreign governments to send these specialized and smart teams," Poudyal added.

Well over 1,000 of the victims were in Kathmandu, where security forces and Indian rescue teams continued to recover the dead. In the course of an hour Monday morning, seven were pulled from a collapsed three-story building. At another site, the body of a 12-year-old girl was found.

Acrid, white smoke rose above the Pashuputi Nath Temple. "I've watched hundreds of bodies burn," said Rajendra Dhungana, 34, who spent Sunday with his niece's family for her cremation at the temple, Nepal's most revered.

The earthquake destroyed swaths of the oldest neighborhoods in the capital, largely a collection of small, poorly constructed brick apartment buildings. Many people were surprised by how few modern structures had collapsed.

Power seemed to have been largely restored Monday night, with streetlights blazing on major roads and lights illuminating closed shops. Things looked normal - except for the many tents pitched everywhere, including on traffic circles.

Fearful of strong aftershocks, tens of thousands of families were spending a third night outdoors in parks, open squares and a golf course, bundled against the chilly Himalayan night.

Among them was Prabina Mainali, a 26-year-old teacher who gave birth to a boy earlier Monday in a Kathmandu hospital - a bit of good news in a sea of despair.

"It's hard that he can't be in his own home right now. He should be there, we should be there, but we aren't safe. We're afraid of the aftershocks," Mainali said, feeding the as-yet unnamed infant from a bottle as a half-dozen relatives cooked a meal on a gas cooker outside the tent in a grassy park.

"We're not safe at home. Here we have less to worry about," she said, adding that her house was not seriously damaged, but windows and other glass inside was shattered.

Kathmandu district chief administrator Ek Narayan Aryal said tents and water were handed out Monday at 10 locations in Kathmandu, but that aftershocks were leaving everyone jittery. The largest, on Sunday, was magnitude 6.7.

Pierre-Anne Dube, a 31-year-old from Canada, slept on the sidewalk outside a hotel. She said she had gone from the best experience of her life - a trek to Everest base camp - to the worst.

"We can't reach the embassy. We want to leave. We are scared. There is no food. We haven't eaten a meal since the earthquake and we don't have any news about what's going on," she said.

The quake was the worst to hit the South Asian nation in more than 80 years. It was felt across parts of India, Bangladesh, China's region of Tibet, and Pakistan. Nepal's worst recorded earthquake, in 1934, measured 8.0 and all but destroyed the cities of Kathmandu, Bhaktapur and Patan.

The quake has strained the resources of this impoverished country best known for Everest, the highest mountain in the world. The economy of Nepal, a nation of 27.8 million people south of the mountain, relies heavily on tourism, principally trekking and climbing. 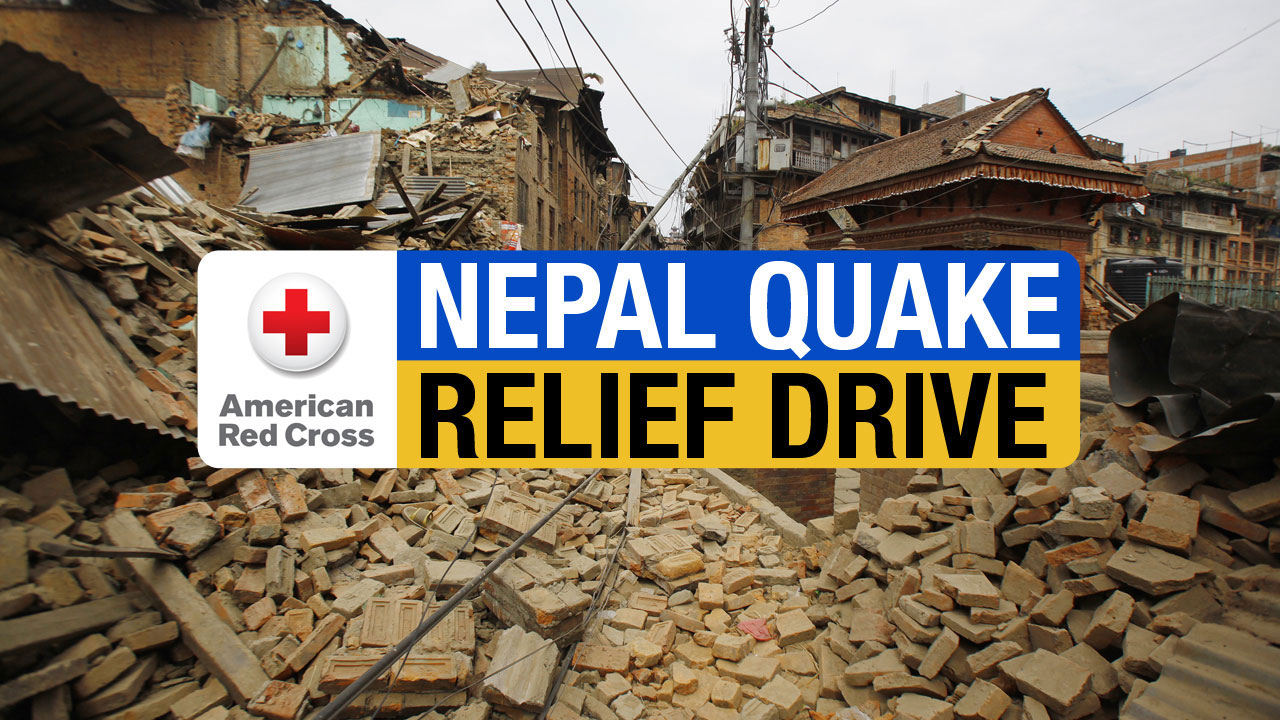 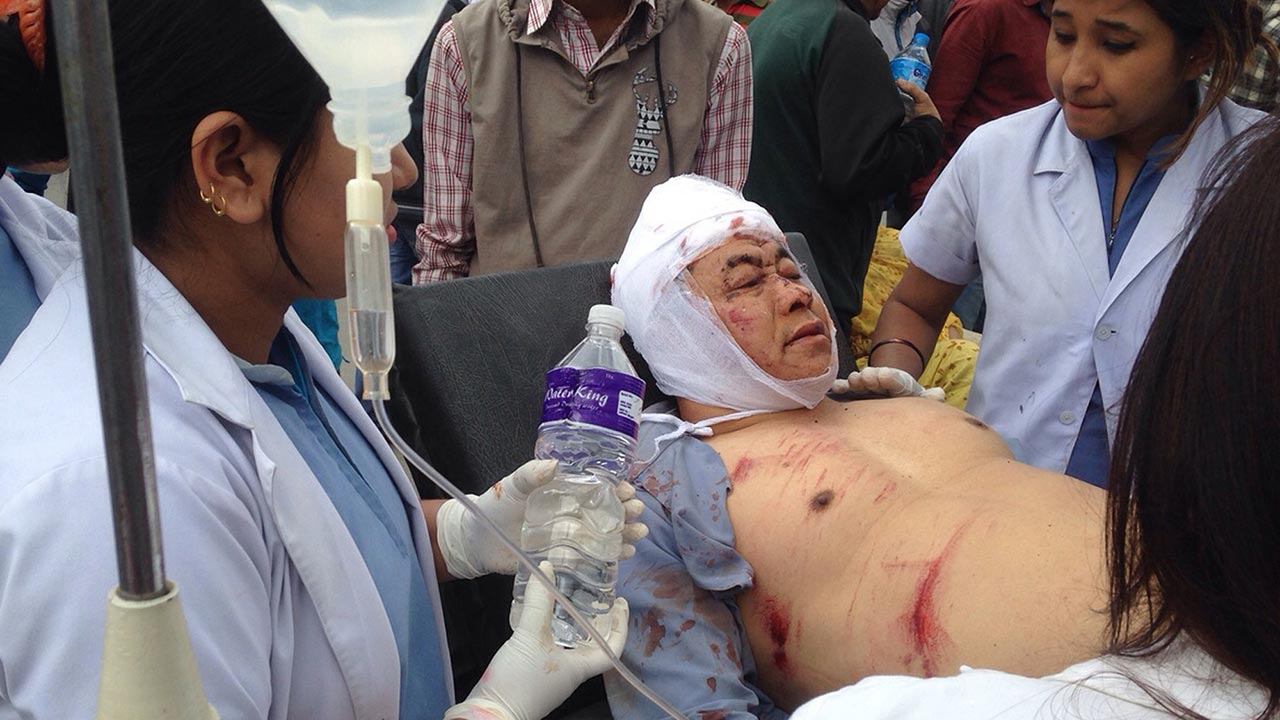 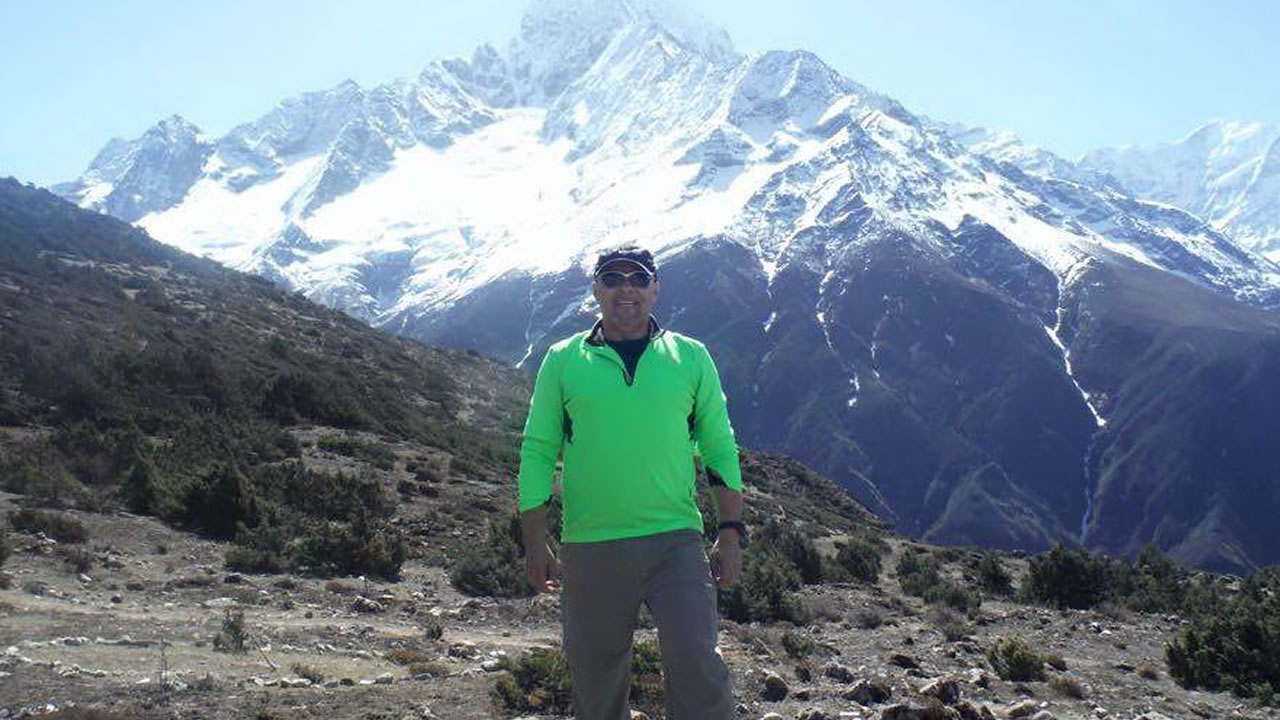 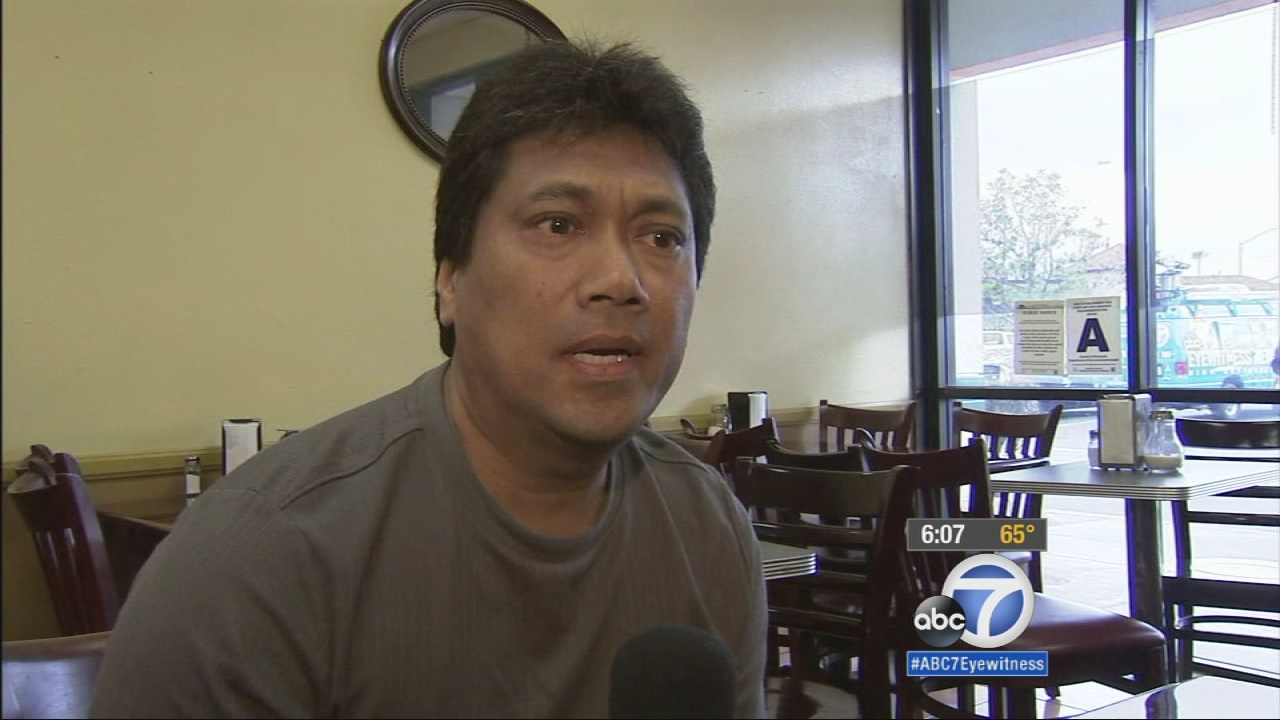 Local Nepalese reach out to family back home after devastating quake 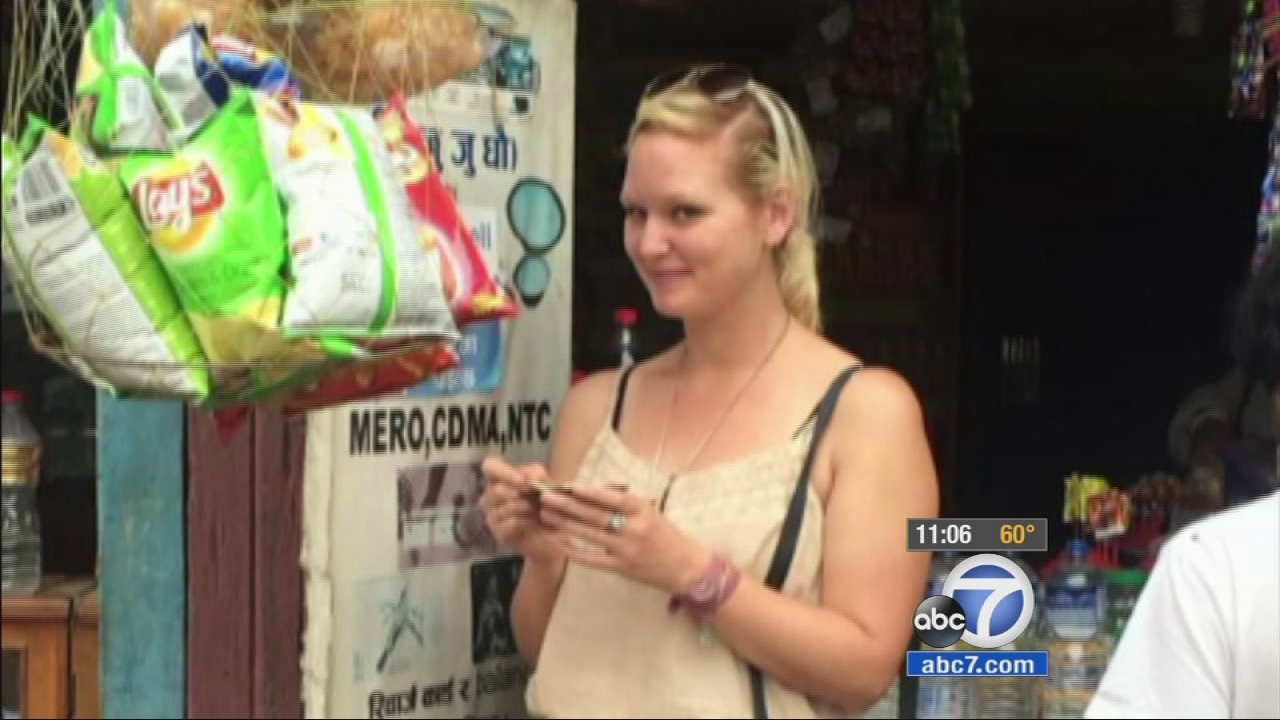 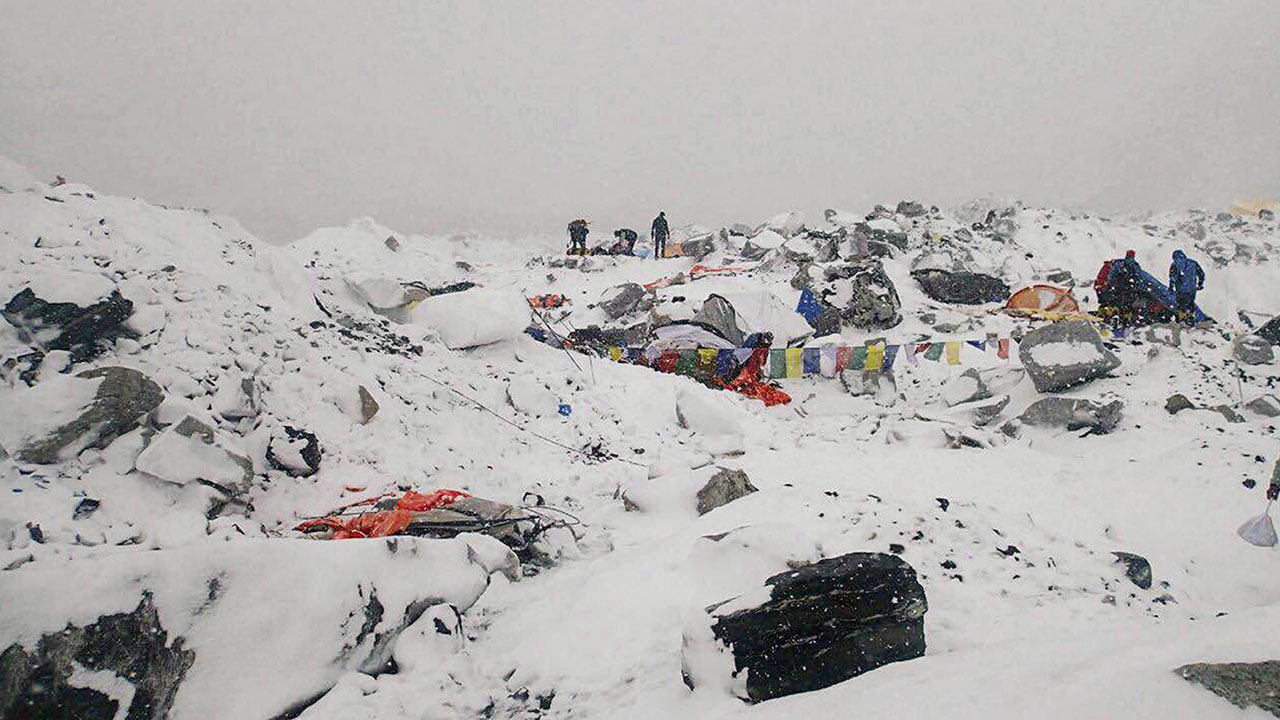