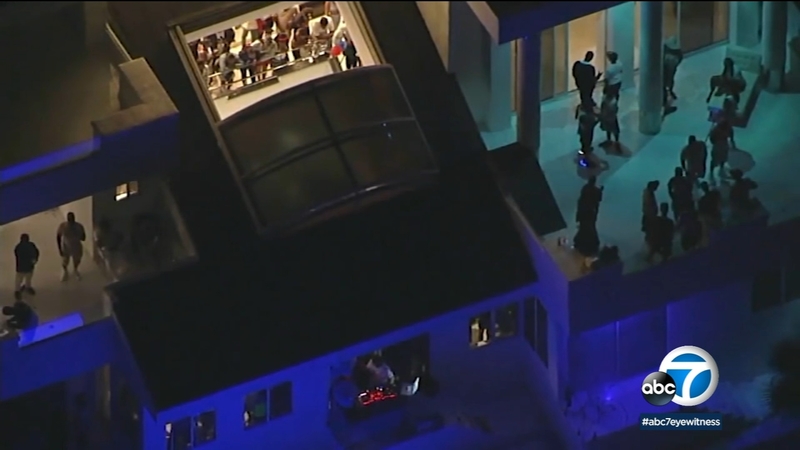 LOS ANGELES (KABC) -- As concerns mount about "super-spreader" events that have contributed to the current COVID-19 surge, law enforcement in Los Angeles is expected to be on party patrol New Year's Eve.

Public officials are urging Angelenos not to gather in groups for the holiday. Such gatherings for Halloween and Thanksgiving were seen as major contributors to the current COVID-19 surge which has pushed the daily death toll to record levels in Los Angeles County.

Officials fear the current surge will get even worse in January as a result of gatherings during Christmas and New Year's.

Mayor Eric Garcetti said the city has already cracked down by turning off utility service this week at one notorious party house in the Hollywood Hills.

"My message couldn't be clearer: Do not get together with others on New Year's Eve," Garcetti said.

Long Beach and Los Angeles police departments are some of the law enforcement agencies planning on having extra patrols to crack down on illegal fireworks on New Year's Eve.

He said the Los Angeles Police Department will have officers on patrol looking for parties. In addition, the city has been contacting online sites to take down New Year's Eve party invitations. The LAPD has also contacted property owners who were known to be planning events.

Garcetti acknowledged that people may be sick of social distancing and they may think there's little harm is hosting a small get-together for the holiday.

The department has targeted a number of large underground parties and made 235 arrests for related crimes discovered at the events, including weapons charges and sex trafficking of a minor.

"I have made it clear that we will seek out and take law enforcement action against all 'Super-Spreader' events occurring anywhere within Los Angeles County," Villanueva tweeted. "The goal of these enforcement actions is to reduce the spread of COVID-19 and the risk to our vulnerable populations."

During the month of December, 235 arrests were made, 7 illegal firearms were taken off the streets & 1 at-risk juvenile was rescued by @lasdhq personnel. I have made it clear that we will seek out & take law enforcement action against all "Super-Spreader" events in @CountyofLA pic.twitter.com/3s0dwvJnaL

In Malibu, officials are asking actor Kirk Cameron to not hold a gathering in the city on New Year's Eve. Cameron has hosted two caroling events in Ventura County this month, with many attendees not wearing masks.

Authorities will also go after people lighting off illegal fireworks, with some agencies using technology to track people blasting off explosives.

Health officials on Wednesday reported the county had passed 10,000 deaths since the start of the pandemic. The county is now averaging at least 150 deaths per day.