Be Kind: Jogger gives homeless man shoes off his feet in Lower Manhattan 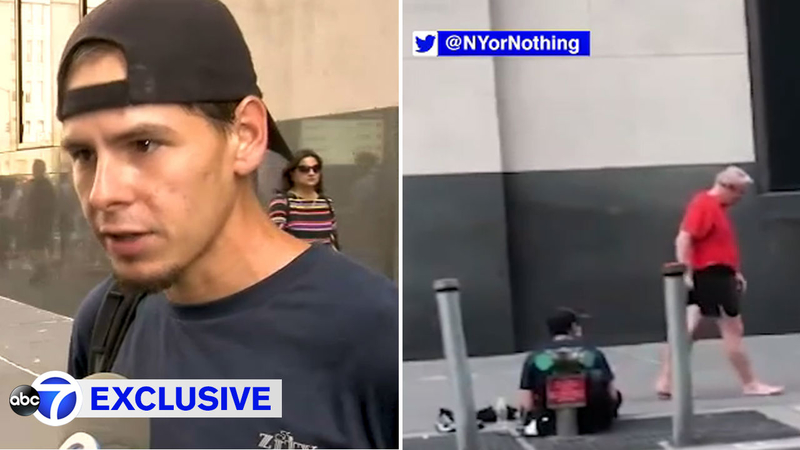 Be Kind: Jogger gives homeless man shoes off his feet in Lower Manhattan

LOWER MANHATTAN, Manhattan -- A jogger gave a homeless man the shoes off his feet in Lower Manhattan on Sunday.

The video was posted to Twitter with the caption, 'It was 9 a.m. in the World Trade Center area. I watched as a jogger took off his sneakers, gave them to a homeless man, and walked the New York streets barefoot."

It was 9am in the WTC area, I watched as a jogger took off his sneakers, gave them to a homeless man, & walked the NYC streets barefoot.

“Our character is what we do when we think nobody is looking.” ❤️ pic.twitter.com/LT9dnMdHo0

"I was sitting here with a sign that I'm homeless and hungry, and my shoes, that they're broken so I took them off to see if somebody would help me with some money, to raise money to buy a new pair," said Arroyo. "I never thought somebody would come out and take their shoes off and just give them to me."

That's exactly what happened. Joe said the jogger, a stranger, noticed he had holes in the bottom of his sneakers, then said: "'I've been blessed my whole life, God has been very nice to me, I feel like I should bless you too' and he took off his shoes and gave them to me."

The man then walked off, barefoot. The woman who shot the video happened to be stopped at a red light and was recording. At first Joe thought it was all a setup.
"He sent someone across to start recording him doing it so he looks like a hero of the town," he said. "But no, I really see it was something from the heart."

Joe has been living on the streets for years and admits he's had his share of trouble and struggles, but said he does what he can to get his life back on track.

"If you give me a chance, I'll be the best worker you have and I do overtime," he said.

As for the jogger, the man who took a few minutes to help someone else, Arroyo is grateful.

"Thank you, I wanted to hug the guy but a homeless man hugging someone out here is not normal," he said.
(Watch more of the interview with Joe Arroyo:)
EMBED More News Videos

Kemberly Richardson spoke exclusively with Joe Arroyo after a jogger gave him his shoes.