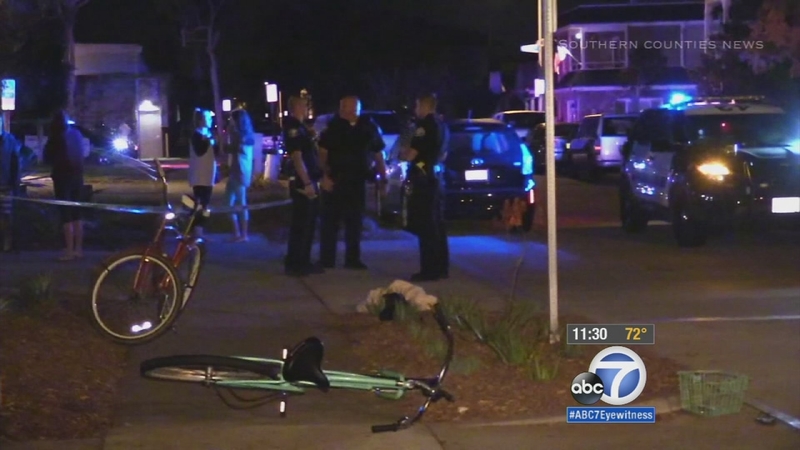 Girl, 14, on bike struck by hit-and-run driver in Newport Beach

NEWPORT BEACH, Calif. (KABC) -- A 14-year-old girl riding her bicycle was critically injured after being struck by a hit-and-run driver in Newport Beach.

The girl was riding her bicycle eastbound along East Bay Avenue near Anade Avenue in an area known to locals as Balboa Village. She was struck by a silver or white Mercedes-Benz traveling westbound on East Bay Avenue around 9:20 p.m. Tuesday.

A witness, who wanted to be identified only as "Katie," told Eyewitness News that she and her sister saw the entire accident unfold.

"At the moment, I just saw a body go over the car and it was like - time to get the car and get her help," Katie said.

Katie said she called 911 while her sister rushed to the fire station, which is very close by. She said her sister managed to lift the station's garage door a crack and yelled inside for help. Firefighters responded to the scene within seconds.

Katie said the girl was unconscious on the ground after being thrown from her bike. She said the impact was so loud - it sounded like gunfire.

Witnesses said they saw airbags deploy inside the Mercedes, but the driver kept on going. Katie said the driver floored it, ignoring witnesses' pleas to stop. She said some people tried to chase the driver on foot, and a passing motorist also tried to catch the culprit.

The girl appeared to have been riding with a group of three friends who were also on their bicycles. Her friends were not injured. Police said the girl was not wearing a helmet and received life-threatening injuries. She was transported to a local trauma center in critical condition.

"The father was on his bike, too. So to see his face as he arrived to the scene, I'll never forget what that looked like," Katie said.

The victim has not been identified. Police said the girl and her family were vacationing in Newport Beach for the summer. Katie said she touched base with the girl's family, who told her that while she remains in critical condition, she has shown some signs of progress.

Area residents say their neighborhood is very small with narrow streets, and it's not uncommon for people to ride their bicycles even after sundown.