The vote comes after Gov. Gavin Newsom admonished Californians who flocked to the crowded beaches over the weekend.
KABC
By Leanne Suter and Marc Cota-Robles 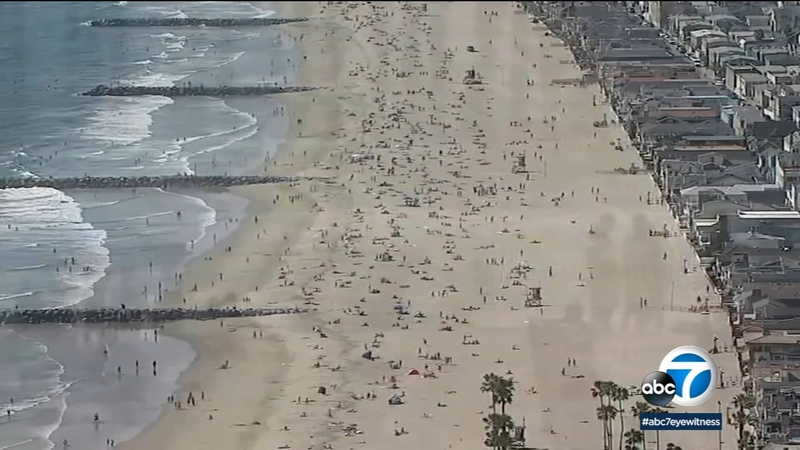 NEWPORT BEACH, Calif. (KABC) -- The Newport Beach City Council on Tuesday voted against a proposed ordinance that would have closed the city's beaches for the next few weekends.

After Newport Beach saw thousands of people sprawled across the sand amid a sweltering heat wave over the past weekend, residents took their concerns to the city council, calling for the beach to be shut down again. City council members heard from both sides of the argument, and in a 5-2 vote, officials voted to keep the beaches open.

The ordinance would have shut down the beaches for the next three weeks.

Gov. Gavin Newsom later admonished those who flocked to the crowded beaches, warning Californians not to delay the state's reopening with risky behavior.

"Those images are an example of what not to see, what not to do if we're going to make the meaningful progress we've made the past couple of weeks."

Gov. Gavin Newsom is warning Californians against risky behavior as images were displayed of crowded beaches over the weekend.

Meanwhile, the Laguna Beach City Council, which closed its beaches last month, voted Tuesday to reopen them for "active use only'' on weekdays beginning Monday.

Beachgoers will have to keep 6 feet apart and will be prohibited from sitting down, putting a beach towel or chair on the sand. Only active uses like running or swimming will be allowed.'

San Clemente also moved to open beaches for a few hours each day. Beach hours are 6 a.m. to 10 a.m., also for active use only.

In Huntington Beach, signs were posted warning beachgoers to practice physical distancing and lifeguards were out patrolling, urging those who may be too close to spread out. Loudspeakers off the pier also announced reminders every hour. Parking lots in Huntington Beach will also remain shut down.
Thousands pack Orange County beaches for second-straight day as SoCal heat wave continues
EMBED More News Videos

The Huntington Beach Fire Department even took to the air to get a better sense of the spacing, praising visitors for following the rules.

"The beach was crowded, but a majority of people at the beach, it looked like to us, were practicing social distancing and enjoying our open space areas," said Battalion Chief Eric McCoy said.

Huntington Beach officials say they know beach access is a hotly debated issue in the battle against the coronavirus.