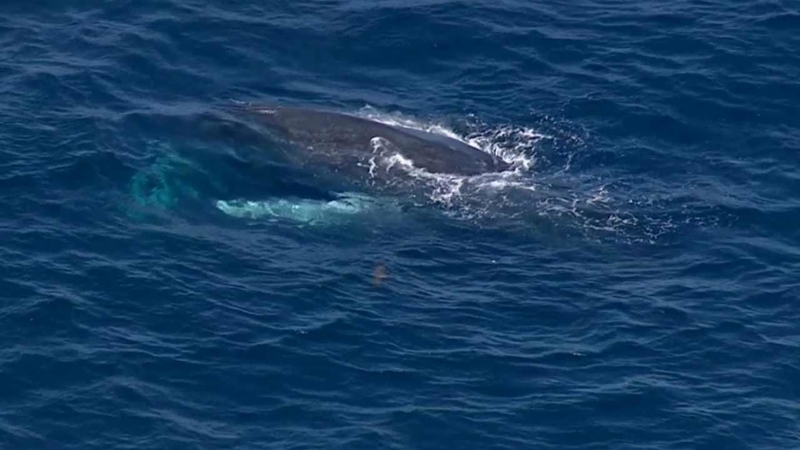 NEWPORT BEACH, Calif. (KABC) -- A humpback whale entangled in some type of fishing line was spotted about one mile off Balboa Pier in Newport Beach on Friday.

The mammal -- more than 35 feet long -- was swimming close to the whale watching boat Western Pride with nearly 90 passengers on board.

"When we first saw the whale, he just came up and blew just like any normal whale," said Capt. Michael Harkins with Davey's Locker Sportfishing.

But, they soon realized the whale was in trouble.

Wrapped around its pectoral fin was a blue line about 100 feet long. Lobster pots were attached to it.

"All of a sudden I saw four buoys attached to the end of that line," said Harkins.

Humpback whales are known for their aerial acrobatic skills. But witnesses say this whale was noticeably in distress.

"He looked tired, definitely every time he came up you could see he was just kind of laying there," said Moore. "Usually their breaths are kind of short. They take a few breaths and they go on a deeper dive is what these whales normally do, and he seemed to be just kind of like conserving energy."

The boat run by Davey's Locker stayed with the whale until the Orange County Sheriff's Department Harbor Patrol arrived. By late afternoon, the whale was swimming further south off Laguna Beach as an entanglement team tried to help.

"I watch these whales every day, it's what I do, and to see them entangled and see them stressed; you could just feel their stress when you're watching them," said Moore.