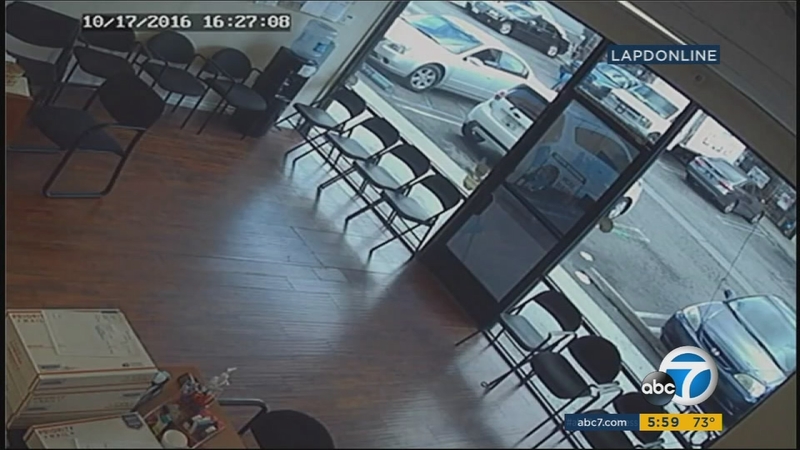 VAN NUYS, LOS ANGELES (KABC) -- A $25,000 reward has been offered to anyone who can help authorities find a hit-and-run driver who left an elderly woman seriously injured in Van Nuys.

Authorities said around 1:20 p.m. on Oct. 17, a 72-year-old Mission Hills woman was walking across a parking lot in the 15300 block of Sherman Way when a car reversed and ran over her. The driver did not stop to render aid and fled the scene.

The woman was seriously injured and hospitalized in grave condition, police said. Surveillance video of the crash was released Friday, showing the suspect backing up and hitting her.

A witness at the scene said she did not see the woman get hit, but saw the car go over her. She said she called 911, went outside and talked to the woman to keep her conscious until help arrived.

Detective Bill Bustos said the suspect appeared to be upset because one of the businesses in the shopping center was closed.

"That driver, after the impact, after running over this pedestrian, stopped momentarily. He knew that this incident had occurred," he said.

The suspect was described as a man standing about 6 feet tall, weighing about 180 pounds, with frosted tips in his hair and sleeve tattoos. He was last seen wearing blue jeans and a blue and yellow shirt.

His car was described as a light blue possibly 2005 four-door Audi. The car had red and blue paper license plates. It also has prior damage to the front passenger side.

If the woman dies before the suspect is found, the reward will be increased to $50,000.