1 bicyclist killed, another injured in apparently deliberate attack by driver in Winnetka

KABC
By John Gregory and BY ABC7.com staff 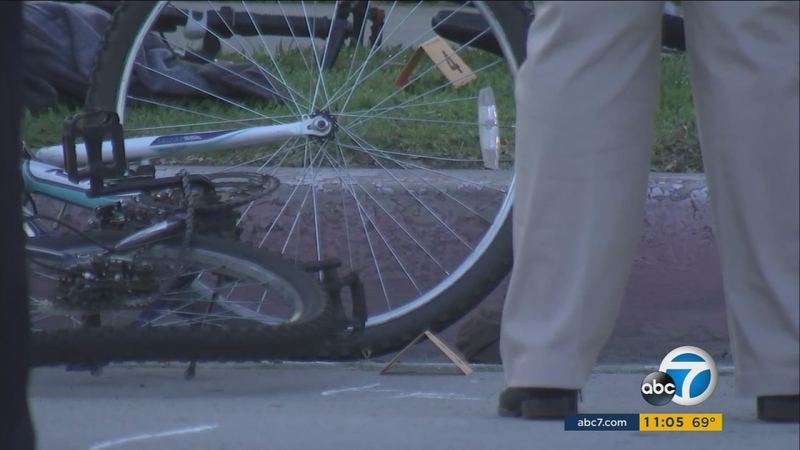 WINNETKA, LOS ANGELES (KABC) -- One bicyclist was killed and another was severely injured early Wednesday morning when they were apparently deliberately struck by a hit-and-run driver in Winnetka, investigators said.

A utility truck hit the bicyclists at about 1 a.m. in the 6500 block of Winnetka Avenue, an LAPD spokesperson said. The vehicle was last seen heading northbound on the roadway, just north of Gilmore Street.

The two victims were rushed to Northridge Hospital Medical Center, where one of them was pronounced dead.

Authorities said the victims were restaurant employees who had just left work.

Police only have one witness in this case, and what he told them was rather chilling. He told investigators it appeared to him that this crash was intentional.

"Certainly a hit-and-run, but again we're trying to determine the motive behind this, whether it was intentional or accidental. Of course, it was nearly 1 o'clock in the morning, and it was very dark, and this is not a very heavily traveled area," said LAPD Capt. Paul Vernon.

That same witness described the hit-and-run vehicle as a white utility truck with tool boxes on the side. Further descriptions of the vehicle were not available.

Authorities scoured the area for more clues, and investigators said they would look into surveillance camera footage in the area.

Police are not ruling out the possibly that they driver may have been drunk.

"Drunk drivers tend to head into the thing that they should otherwise be avoiding," Vernon said. "Where our eyes go, our hands tend to go, surprisingly enough."

Vernon added that determining the intent in this incident will be very difficult to do.

The investigation was taken over by the LAPD's Homicide Bureau.

Detailed descriptions of the suspect were not available. If you have any relevant information about this case, you're urged to contact the LAPD.
Related topics:
winnetkalos angeleslos angeles countytraffic fatalitieshit and runbicyclebikesbicycle crash
Copyright © 2021 KABC-TV. All Rights Reserved.
More Videos
From CNN Newsource affiliates
TOP STORIES