1 dead, 1 wanted after shootout in Pomona 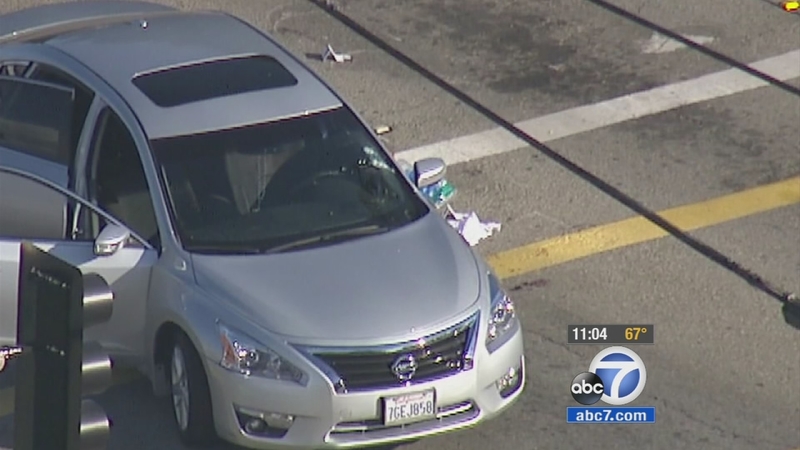 1 dead, 1 wanted after shootout in Pomona

POMONA, Calif. (KABC) -- A search was underway for a suspect who killed a man in a shootout in Pomona Thursday afternoon, which prompted three schools to be placed on precautionary lockdowns.

Authorities were investigating to see if the suspect was the same person involved in a carjacking.

Pomona police said the shooting happened around 2:45 p.m. at the intersection of Lexington and South Park avenues near Garey High School.

The occupant of a silver Nissan, later identified as Joe Morales, 21, of Pomona, and another man in a stolen BMW were involved in the shootout, according to police. Morales was hit by gunfire and then transported to a nearby hospital, where he was pronounced dead.

The other shooter fled and ditched the stolen BMW down the street, authorities said. A short time later, officers got a call from a hospital in Montclair saying a man with a facial injury came into the emergency room.

"Once the patient was notified that the police were notified and would have to speak to that gentlemen, he fled the hospital in Montclair, walked over to a nearby facility and carjacked a vehicle at knifepoint," said Lt. Eddie Vasquez of the Pomona Police Department.

The suspect fled in a white Volkswagen. Police said it's not entirely clear what led up to the shooting, but they don't believe it was random.

"We do have some preliminary information that suggests it was a gang-related shooting," said Vasquez

Garey High School, Fremont Academy of Engineering and Design and Lexington Elementary School were placed on lockdown. The lockdowns were lifted around 3:30 p.m.