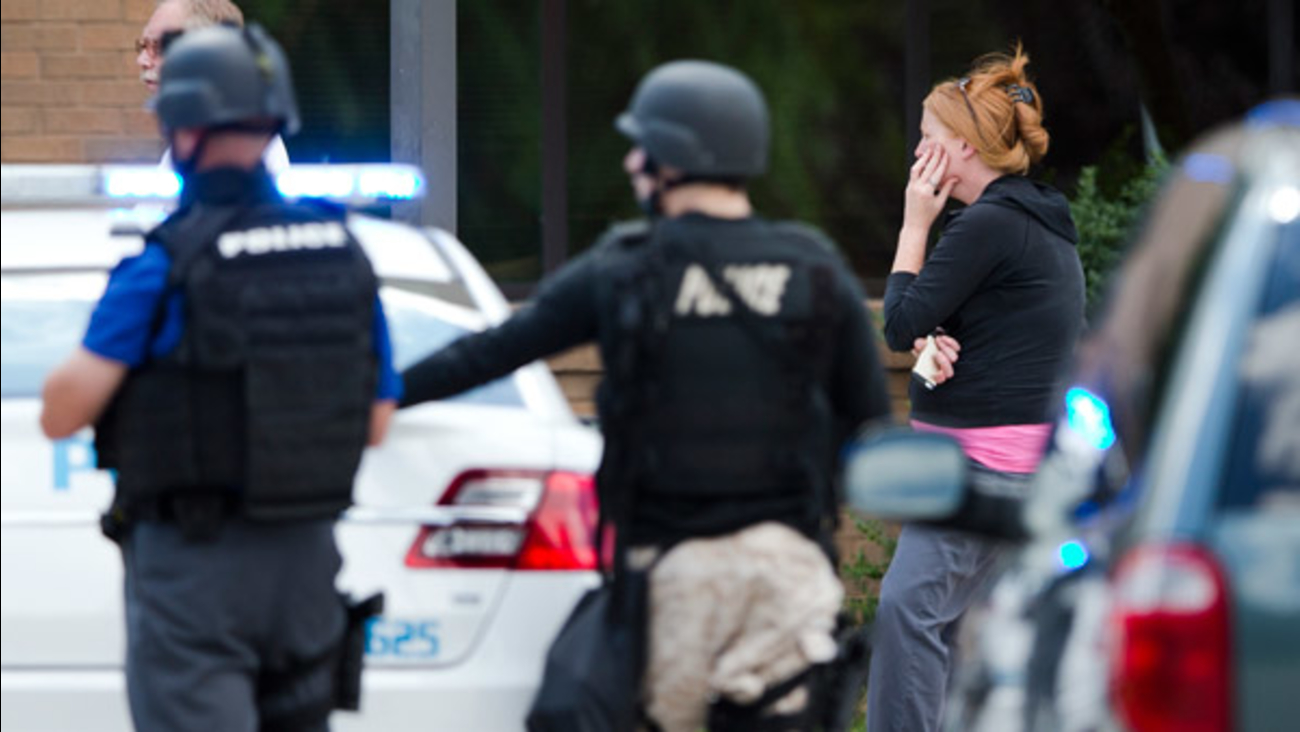 A hospital worker views police activity around the scene of a shooting Thursday, July 24, 2014, at Mercy Fitzgerald Hospital in Darby, Pa.

DARBY, Pa. -- A hospital worker is dead while a doctor and the gunman are injured after a shooting inside a building on the campus of Mercy Fitzgerald Hospital on Thursday afternoon.

It was around 2:30 p.m. when Darby Borough Police were called out to the hospital's wellness center, located across the street from the main building on Lansdowne Avenue, for the report of a shooting.

Officials say a patient, identified as Richard Plotts, came into the psychiatric unit on the third floor of the building with his caseworker.

Plotts and the caseworker went into a doctor's office, at which time witnesses say they heard some loud arguing inside. Other employees tell police they opened the door and saw Plotts pointing a gun at the doctor. They quietly closed the door and ran to call 911.

According to police, Plotts shot his case worker, killing her. The preliminary investigation indicates that Plotts then turned his weapon on the doctor and opened fire. The doctor responded by returning fire on Plotts, hitting him three times in the torso.

Authorities say another doctor and caseworker barged into the room, saw the doctor holding his bloody face and Plotts still holding his weapon. They then wrestled Plotts to the ground and held him until police arrived.

Both the doctor and suspect were transported to the Hospital of the University of Pennsylvania.

The doctor suffered graze wounds in the shootout, but is expected to be released.

Plotts is currently in critical condition.

Two guns were retrieved at the scene - one belonging to the suspect and the other, which is thought to belong to the doctor.

Delaware County District Attorney Jack Whelan says there were other incidents involving Plotts and hospital employees, including the doctor's staff, in the past.

Whelan says the scene is now secured. He also says that it is believed that the doctor acted in self defense.

The name's of the victims have not been released. Witnesses are being interviewed.

The 100 people inside the wellness center at the time of the shooting were evacuated. Mercy Fitzgerald Hospital remains open, but is currently diverting patients to other hospitals.

ATF agents as well as police from as far away as Upper Darby and Haverford townships responded to the hospital campus, including the Delaware County SWAT Team. Officers, armed with heavy artillery, moved in to secure the scene.

Every worker was checked while leaving the building.

Sue Moyer, an employee at the wellness center, tells us, "I was in the mammography suite taking care of patients, and we were just told to evacuate and we went out the back door."

Anna Rose Smith also works in the wellness center. When asked what she saw when exiting the building, she said, "You see a lot of cops. A lot of SWAT teams, a lot of very protective police officers in the area doing their job."

When asked if patients are typically searched for weapons at the facility, Whelan said, "We do not believe for that to be typical. We looked, there is no weapons detectors, no metal detectors that are available here. I believe that is consistent with some other units. The question is, do you evaluate that now in light of this incident, as we always do."

The 213-bed teaching hospital in Darby Borough, Delaware County is part of the Mercy Health System.