KABC
AUSTIN, Texas (KABC) -- An attacker with a machete-like knife fatally stabbed one person and wounded at least three others on the University of Texas campus Monday, and police have a suspect in custody, authorities said.

The Austin-Travis County Emergency Medical Services posted on Twitter that one person died at the scene near the Gregory gym.


The other injured individuals were transported to the hospital with potentially serious wounds. The agency noted that there were also additional patients with non-life-threatening injuries.

Emergency crews were notified just after 1:30 p.m. local time about a multiple stabbing.
Student Rachel Prichett said she was standing in line at a food truck outside the gym when she saw a man with a knife that resembled a machete approach the person standing behind her.

"The guy was standing next to me," Prichett said. "He grabbed him by the shoulder and shoved the knife in it. I just started running as fast as I could."

Ray Arredondo, 22, said he was walking to his car when a mass of students near the gym started running.

"They were just screaming, 'Run! Get out of here!'" Arredondo said.

He later saw what looked like CPR being performed on someone outside the front door of the gym. Another student, Arredondo said, was sitting on a bench being treated for cuts to the head or neck.

Student Peter Hasse said he saw police put a suspect in handcuffs and into a patrol car. The man in custody seemed calm, Hasse said.

The university sent an alert to everyone on campus saying that there was criminal activity with injury.

The University of Texas is blocks from downtown Austin and the Texas capitol building and is one of the nation's largest universities.

The attack occurred in the central campus, just a short walk from the administration building and landmark clock tower that was scene of a mass shooting in 1966. 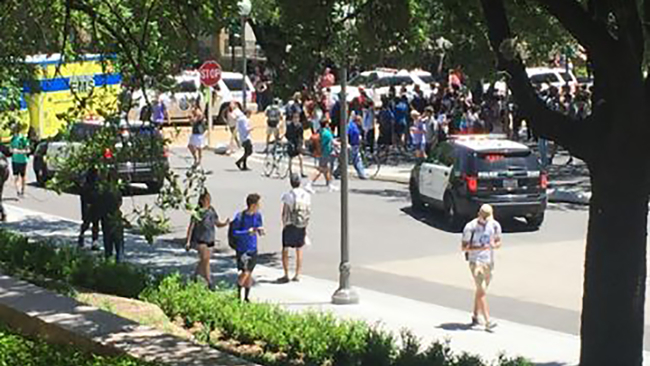