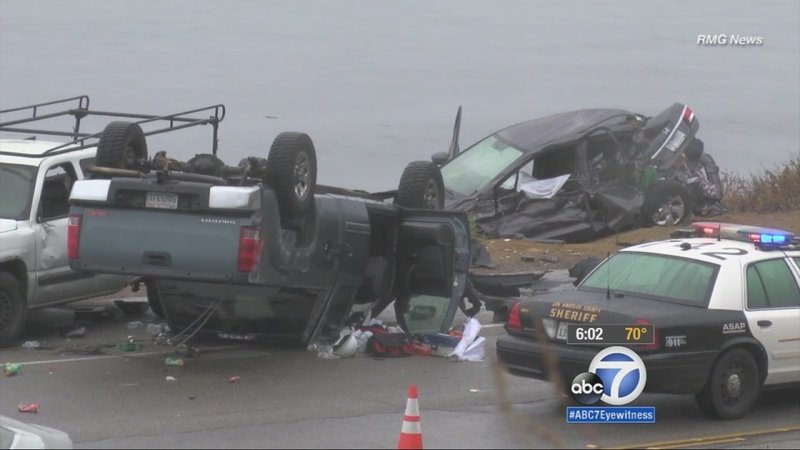 MALIBU, Calif. (KABC) -- A man was killed and a woman was injured after a pickup truck smashed into them as they sat in a parked car along Pacific Coast Highway in Malibu Saturday morning.

The Honda Civic was struck by a full-size GMC pickup truck at about 6:22 a.m., officials said. The sedan rolled over and came to a rest at the lip of an embankment above the beach.

The man in the driver's seat of the parked sedan was pronounced dead at the scene by the Los Angeles County Fire Department. The female passenger was transported to a local hospital with unknown injuries. Their names have not been released.

The driver of the full-size GMC pickup truck, identified as Philip Torres II, sustained minor injuries. Torres, 34, of Oxnard, was arrested on suspicion of vehicular manslaughter and DUI. The cause of the crash remains under investigation.

The California Highway Patrol issued a SigAlert shortly before 7 a.m., closing all eastbound lanes on Pacific Coast Highway and Corral Canyon Road for about four hours. The road was reopened to two-way traffic at 9:45 a.m., and all lanes were reopened by noon.

Anyone with further information was urged to contact Malibu/Lost Hills Sheriff Station traffic investigators at (818) 878-1808.