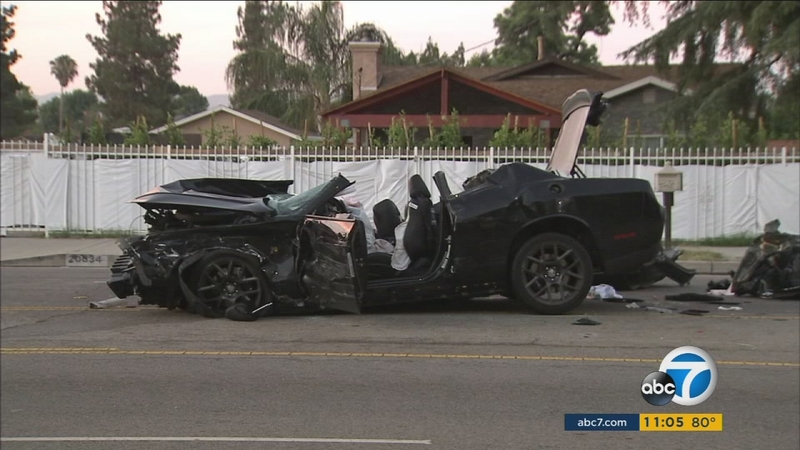 WINNETKA, LOS ANGELES (KABC) -- A woman was killed and several other people were injured in a violent three-car crash in the Winnetka area of Los Angeles early Thursday morning.

The collision, which stretched several blocks, was reported shortly after 2 a.m. in the area of Irondale Avenue and Roscoe Boulevard, according to Los Angeles police.

It all started when a Dodge Challenger traveling along Roscoe Boulevard at a high rate of speed hit a Subaru, which then lost control. The Challenger kept going until the driver struck a Ford vehicle driven by a woman in her early 40s. The Ford then slammed into a tree, killing the single mother. Police previously reported the victim was in her 20s but that was later revised.

The sole occupant in the Subaru suffered minor injuries.

"Several neighbors were pulling buckets of water to put out that fire, and I saw several neighbors, one with a sledgehammer, trying to bust two fellas out of that vehicle," said witness Brian Lolli.

All three men in the Challenger had to be extricated. One was transported in critical condition and the two others had severe injuries, according to LAPD investigators.

Investigators at the scene said preliminary tests indicate the driver in the Challenger was driving under the influence. It was not yet clear whether it was drugs or alcohol. There was no indication street racing was involved.

The identity of the woman killed was not released, but visibly distraught family members went to the scene of the crash. They said they were devastated and worried about how they would break the news to the woman's 12-year-old son.