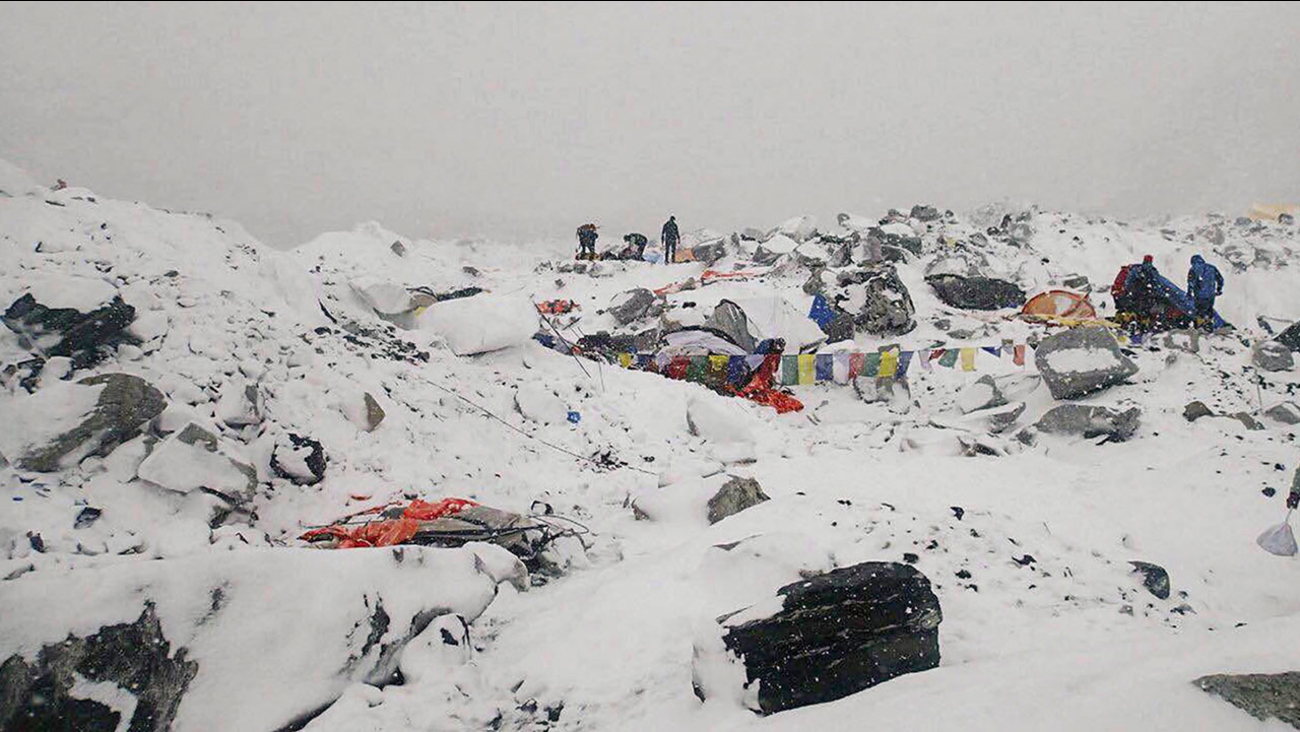 This photo provided by Azim Afif shows the scene after an avalanche triggered by a massive earthquake swept across Everest Base Camp, Nepal on Saturday, April 25, 2015. (Azim Afif via AP)

KATHMANDU, Nepal -- An avalanche triggered by a massive earthquake swept across Nepal's Mount Everest region on Saturday, killing at least 10 climbers and guides, slamming into a section of the mountaineering base camp, and leaving an unknown number of people injured and missing, officials said.

Numerous climbers may now be cut off on routes leading to the top of the world's highest peak.

The avalanche began on Mount Kumori, a 7,000-meter (22,966-foot) -high mountain just a few miles (kilometers) from Everest, gathering strength as it headed toward the base camp where climbing expeditions have been preparing to make their summit attempts in the coming weeks, said Ang Tshering of the Nepal Mountaineering Association.

The avalanche - or perhaps a series of avalanches hidden in a massive white cloud - plowed into a part of base camp, a sprawling seasonal village of climbers, guides and porters, flattening at least 30 tents, Tshering said. With communication very limited at Everest, it was not immediately clear how many of those injured and killed were at base camp, and how many were elsewhere on the mountain. 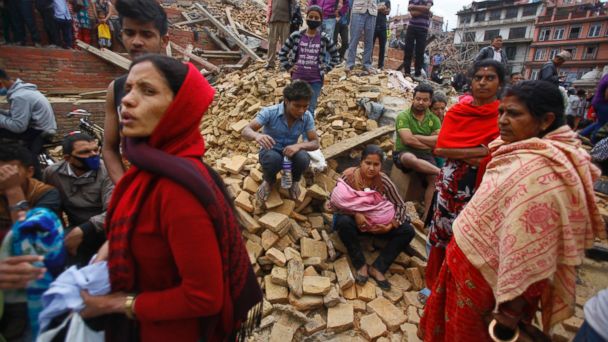 Death Toll From Nepal Quake Jumps Over 2,100
The earthquake struck near Kathmandu, Nepal's capital.
Survivors reached over Internet messaging services, however, described a scene of terror as the snow and ice roared through the nearby Khumbu Icefall and into base camp.

Azim Afif, the 27-year-old leader of a climbing team from University of Technology Malaysia, said in an interview on the service WhatsApp that his group was in a meal tent waiting for lunch when suddenly the table and everything around them began shaking.

When they ran outside, they saw "a wall of ice coming towards us," and heard the cries of Sherpa guides shouting for people to run for their lives, he wrote. "We just think to find a place to hide and save our life."

The small team planned to sleep together Saturday night in one large tent "to make sure if anything happen, we are together," Afif said.

Quickly, though, climbing teams scattered across base camp began to work together to search for survivors.

Gordon Janow, the director of programs for the Washington-based guiding outfit Alpine Ascents International, said from Seattle that his team had come through the avalanche unscathed. Their first goal was to deal with the devastation at base camp, he said, and they would then try to create new routes to help climbers stuck above the treacherous Khumbu Icefall. The icefall, which is just above base camp, is a key route up the lower part of Everest.

"Everybody's pretty much in rescue mode, but this is different from some independent climbing accident where people can be rescued and taken somewhere else," Janow said. "I don't know where somewhere else is."

While helicopters would normally be used to pluck stranded climbers, it was unclear whether any would be available for Everest, given the devastation in and around Kathmandu. By Sunday morning, authorities said at least 1,500 people across the region had been confirmed dead. 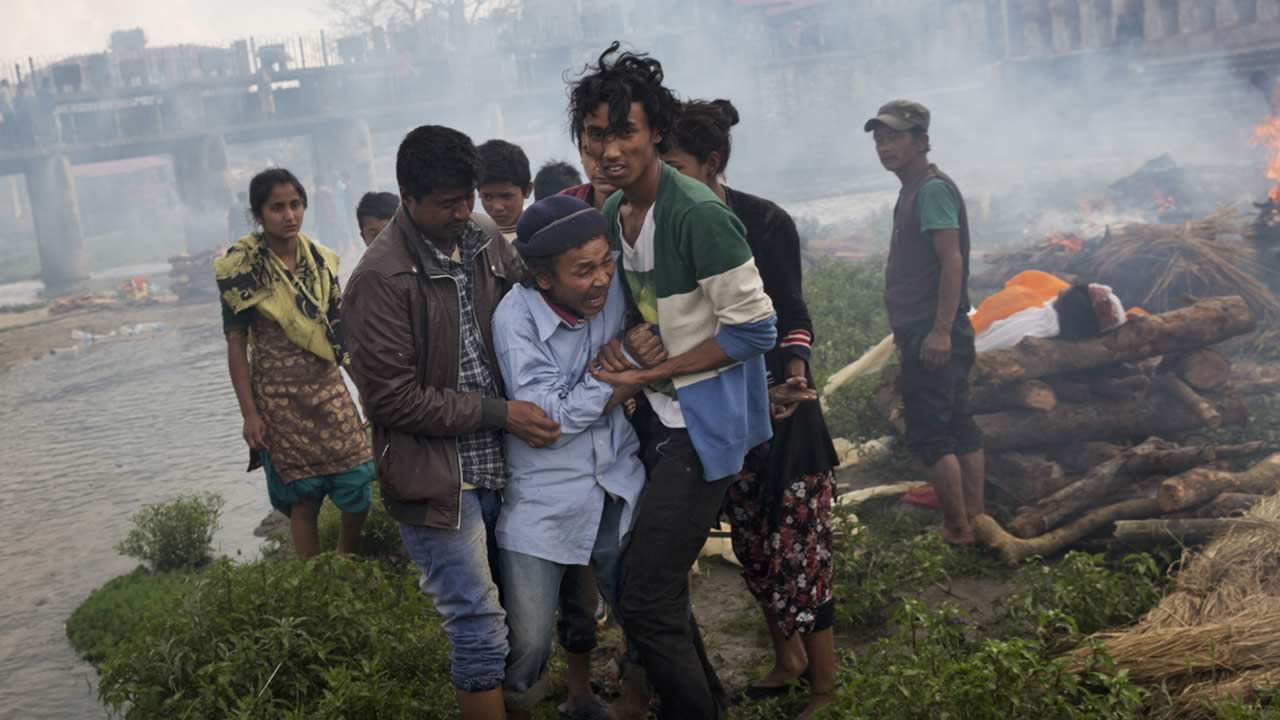 Nepal earthquake: Inside the aftermath
Photos show the devastation following an earthquake that struck a swath of four countries on Saturday
An official with Nepal's mountaineering department, Gyanendra Shrestha, said the bodies of 10 people had been recovered and an unknown number remained missing or injured. Their nationalities were unclear as climbers described chaotic attempts to treat the injured amid fears of more landslides and aftershocks that continue to rattle the region. Chinese media reported that a Chinese climber and two Sherpa guides were among the dead.

Dan Fredinburg, a Google executive who described himself as an adventurer, was among the dead, Google confirmed. Lawrence You, the company's director of privacy, posted online that Fredinburg was with three other Google employees hiking Mount Everest. The other three, he added, are safe. Fredinburg served as product manager and the head of privacy at Google X.

The actress Sophia Bush, who has appeared in photos with Fredinburg posted by entertainment outlets, called him "one-of-a-kind" in a post on Instagram.

Hundreds of climbers - ranging from some of the world's most experienced mountaineers to relative novices on high-priced, well-guided trips -make summit attempts on Everest every year. At times, when the weather is agreeable, dozens of people can reach the summit in a single day. But high winds, brutal cold, difficult terrain and massive avalanches can hit the mountain with little or no notice. Hundreds of people have died on the mountain over the years.

Reports in China said an amateur team encountered an avalanche on the north slope of the mountain at an elevation of more than 7,000 meters (23,000 feet) and safely retreated to a lower camp.

The magnitude-7.8 quake struck at around noon Saturday about 80 kilometers (50 miles) northwest of Nepal's capital, Kathmandu, just over a year after the deadliest avalanche on record hit Everest, killing 16 Sherpa guides on April 18, 2014.

The 2014 deaths occurred at the Icefall, where the edge of the slow-moving glacier is known to crack, cave and send huge chunks of ice tumbling without warning.

More than 4,000 climbers have scaled the 8,850-meter (29,035-foot) summit since 1953, when it was first conquered by New Zealand climber Edmund Hillary and Sherpa Tenzing Norgay. The numbers have skyrocketed in recent years, with more than 800 climbers during the 2013 spring season.