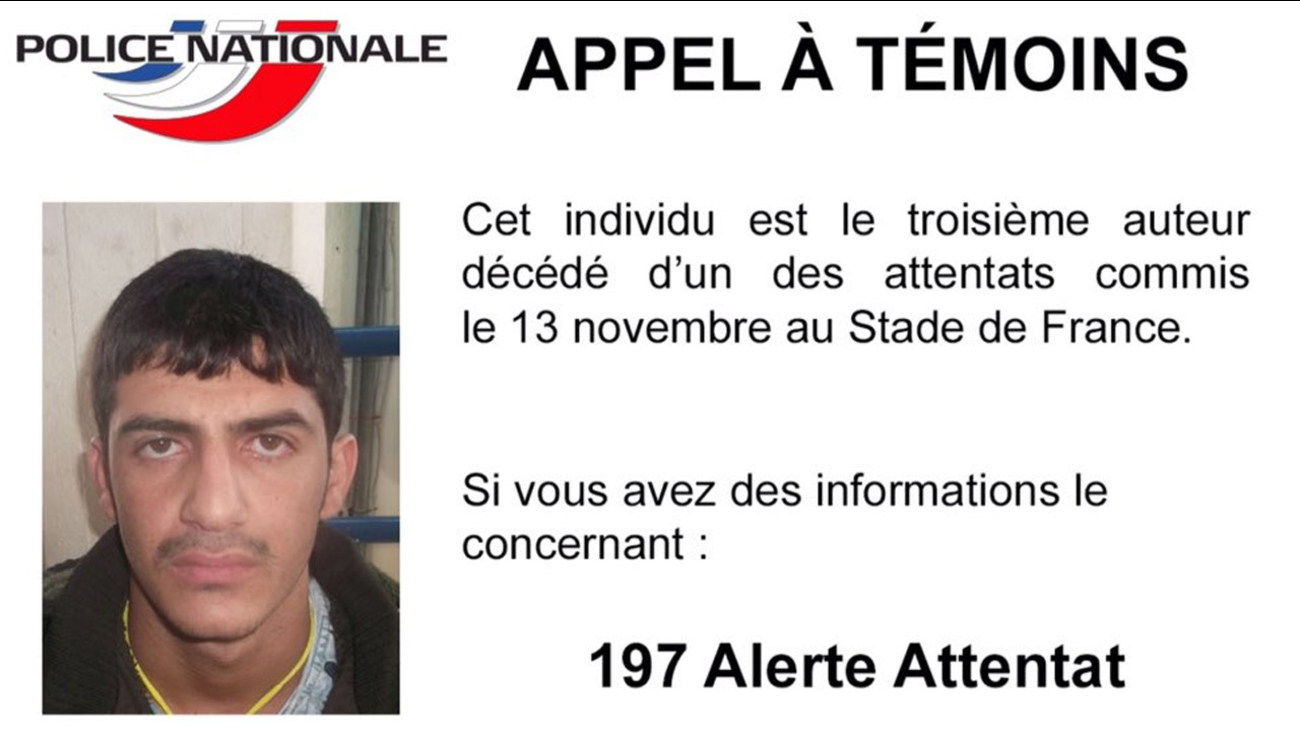 A French poster shows a photo of a third attacker killed during a coordinated attack at a Paris stadium on Friday, Nov. 13, 2015.

BRUSSELS -- Authorities will keep the Belgian capital on the highest state of alert into Monday's start of the workweek because of the "serious and imminent" threat of a Paris-style attack, the prime minister said.

Schools and universities in Brussels will be closed, and the city's subway will remain shut down, government officials decided at a meeting Sunday of the country's National Security Council.

With one suspect in the Nov. 13 attacks in France last seen crossing into Belgium, officials in Brussels kept much of the city shut down during the weekend. Officials also recommended that sports competitions and all activities in public buildings be cancelled, and malls and commercial centers closed.

"We fear an attack like in Paris, with several individuals, perhaps in several places," said Prime Minister Charles Michel, who chaired the meeting. Brussels was put on Level 4, the highest state of alert, while the rest of Belgium was on Level 3.

Belgian Interior minister Jan Jambon said several suspects tied to the Paris attacks were thought to be at large and that the threat wouldn't necessarily disappear if Salah Abdeslam - who is believed to have played a key role in the attacks - was found.

In France, meanwhile, police issued a new appeal to identify the third attacker who was killed in the attacks at the national stadium in Paris. They posted a photo of the man on Twitter, appealing to the public for information that would help identify him.

Western leaders stepped up the rhetoric against the Islamic State group, which has claimed responsibility for the attacks in Paris that killed 130 people and wounded hundreds more; the suicide bombings in Beirut that killed 43 people and injured more than 200; and the downing of the Russian airline carrying 224 people in Sinai. All happened within the past month.

Speaking from Kuala Lumpur, President Barack Obama said the world would not accept the extremists' attacks on civilians as the "new normal," and vowed the United States and its international partners would not relent in the fight against the Islamic militants.

French Defense Minister Jean-Yves Le Drian said IS must be destroyed at all costs.

"We must annihilate Islamic State worldwide ... and we must destroy Islamic State on its own territory," Le Drian said. "That's the only possible direction."

France has intensified its aerial bombing in Syria and Le Drian said French aircraft carrier Charles de Gaulle, which has been sent to help operations against IS militants in Syria, will be "operational" from Monday and "ready to act."

French President Francois Hollande is scheduled to meet in Paris with British Prime Minister David Cameron on Monday, and will travel to Washington and Moscow later in the week to push for a stronger international coalition against IS. Cameron is expected to outline his plan for combating the Islamic militants this week as he seeks Parliamentary approval to join France, the United States and Russia in striking the group's strongholds in Syria.

Russia is also trumpeting action it's taking to fight IS. Last week it intensified its airstrikes in Syria in retaliation to the bombing on Oct. 31 of its passenger plane in Egypt and on Sunday Russian law enforcement officers raided a hideout of armed militants in the North Caucasus, killing 11 of them in an exchange of fire.

The militants were part of a group whose members had pledged allegiance to IS, the National Anti-Terrorist Committee said in a statement.

IS atrocities like the Paris attacks are partly aimed at provoking the West, as the group hopes that stepped-up military action in the region will reinforce its narrative of a clash of civilizations and thus drive more Muslims into its ranks. IS and other jihadi groups seize on harsh Western rhetoric and civilian deaths to portray themselves as defending Muslims from modern-day "Crusaders."

While its goal is a Western retreat from the Middle East, in the near-term it would likely welcome the arrival of foreign ground troops, viewing it as an opportunity to drag Western nations into a costly and bloody war of attrition.

Tensions have been high in Europe since the attacks in Paris. France has extended a state of emergency - which allows police raids, searches and house arrest without permission from a judge - for three months, and on Saturday extended a ban on demonstrations and other gatherings through Nov. 30, when a U.N. climate conference with more than 100 heads of state is scheduled to start.

All the usual markets in Brussels were canceled Sunday and the minister of education, Joelle Milquet, told Le Soir newspaper that there was a 50 percent chance schools would be closed Monday.

"Unfortunately, the threat is wider than this (one) figure," Jambon told Flemish broadcaster VRT. "There are several suspects, which is why we have put so many resources in place."

Authorities in Brussels have released few details about their ongoing investigation.

Several of the Paris attackers had lived in Belgian capital, including suspected mastermind Abdelhamid Abaaoud, who was killed in a standoff with French police on Wednesday.

Abdeslam is known to have crossed into Belgium the morning after the attacks. His brother Mohamed Abdeslam called for him to surrender and said he would rather see him in prison than in a cemetery.

On Saturday, authorities in the Turkish coastal city of Antalya detained a 26-year-old Belgian citizen, suspected of being connected to Islamic extremists and possibly to the Paris attacks.

In a sign of the nervousness that has swept through Paris since the attacks, some travelers at the Gare Du Nord train station ran out of their trains Sunday after hearing noises they thought were gunshots but were actually caused by a pigeon being electrocuted on the tracks.