KABC
By ABC7.com staff
1 / 19
Vin Scully waves to the fans at Dodger Stadium on Sunday, Sept. 25, 2016. The game would be his final home game in Los Angeles before his retirement.
AP Photo/Chris Carlson
ELYSIAN PARK, LOS ANGELES (KABC) -- "Hi everybody, and a very pleasant good evening to you."

In dramatic fashion, with the Dodgers down to their last out and trailing 3-2, rookie shortstop Corey Seager blasted a home run to send the game into extra innings.

The Dodgers won the game with a Charlie Culberson walkoff home run in the bottom of the 10th inning and clinched the 2016 National League West Division title. It's the Dodgers fourth straight division title.

All the Dodgers players came to the middle of the field and tipped their caps to Scully who stood and waved from the broadcast booth.

At the conclusion of the game, Scully showed his appreciation to the fans by singing "Wind Beneath My Wings."

While the action on the field was exhilarating, fans were tuned in to hear the 88-year-old who has been the voice of the Dodgers since he called his first game with the team in 1950, back when the team still played in Brooklyn.

In a letter penned to fans Friday evening, Scully recalled first falling in love with baseball as a boy passing a window in New York to watch the World Series between the Yankees and the then-New York Giants on Oct. 2, 1936.

He would go on to be the youngest broadcaster to ever call a World Series game in 1953 when he was 25 years old, and 80 years to the day he passed that window, he'll retire with a broadcast of the Dodgers season-ending matchup against the Giants in San Francisco on Oct. 2.

"You were simply always there for me," Scully wrote. "I have always felt that I needed you more than you needed me and that holds true to this very day."

MORE: Vin Scully pens love letter to Dodger fans, 'You were always there for me'

Scully's many honors include the Ford C. Frick Award, presented annually by the Baseball Hall of Fame to a broadcaster for "major contributions to baseball" and being named the greatest sportscaster by the American Sportscasters Association.
Related topics:
sportselysian parklos angeleslos angeles countymlbbaseballtelevisionradiolos angeles dodgers
Copyright © 2021 KABC-TV. All Rights Reserved.
RELATED 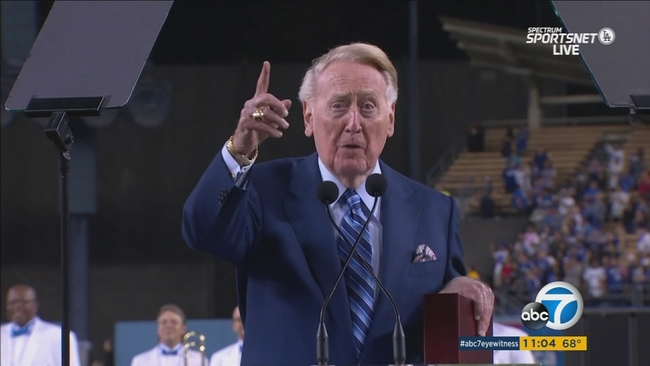 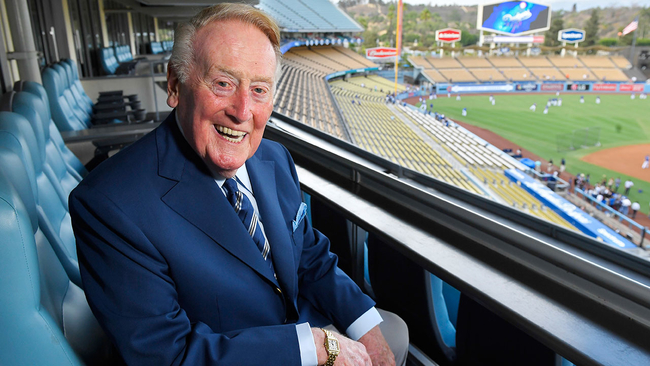 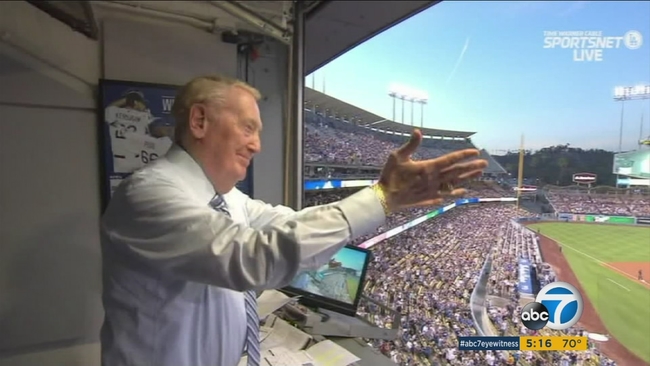