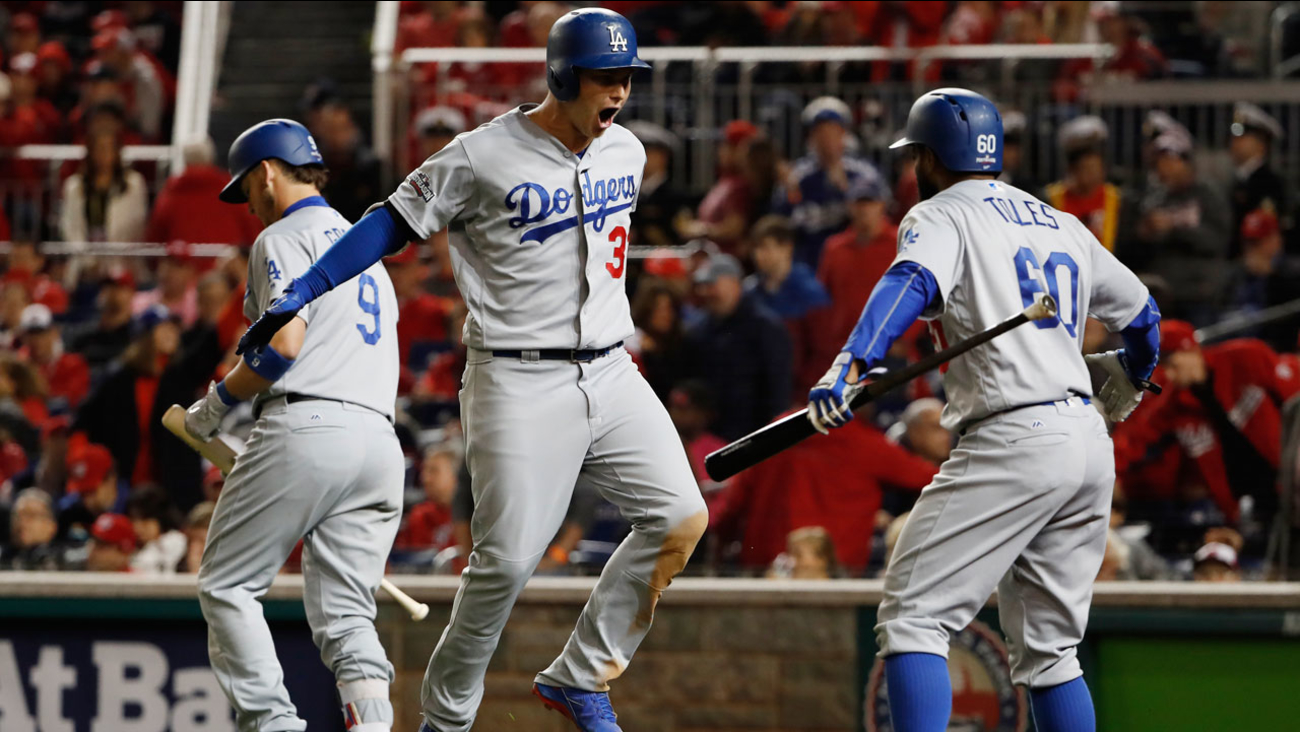 WASHINGTON -- A little past midnight in Game 5 of the NL Division Series, Clayton Kershaw emerged from the bullpen to pitch in relief for the first time in seven years.

Two outs later, the only save of his major league career in the books, Kershaw's arms were raised and teammates were rushing to celebrate with a guy whose postseason performances have never carried the luster of his regular-season success.

Coming in after closer Kenley Jansen entered in the seventh inning and threw a career-high 51 pitches but issued a pair of one-out walks in the ninth, Kershaw got Daniel Murphy to pop out, then struck out Wilmer Difo to end it.

That finished the Los Angeles Dodgers' dramatic 4-3 victory over the Washington Nationals that decided their NLDS in the wee hours of Friday.

"The adrenaline rush was pretty good right there," said Kershaw, who approached Dodgers manager Dave Roberts in the seventh inning to offer to pitch if need be on the must-win occasion.

"At the at the end of the day, if we don't win that game, we're going home, anyway, so what does it matter?" Kershaw said . "I just wanted to be available, and it ended up to the point where I could help out tonight."

The Dodgers won the last two games of the best-of-five NLDS with Kershaw pitching in each and now head to the NL Championship Series to face the Chicago Cubs. That opens at Wrigley Field on Saturday night.

The Nationals, meanwhile, still have never won a postseason series, winning three NL East titles in the past five years but losing in the NLDS each time.

And while there's no way Kershaw will be available for Game 1 against Chicago, one thing's for sure: Whatever notion there might have been about the lefty's playoff problems - he was 2-6 in the postseason until this series, with an ERA nearly twice what he has in the regular season - is now a thing of the past.

"That (criticism) is ridiculous," Dodgers President Stan Kasten said, his dress shirt soaked with alcohol from the postgame festivities. "That's why I said to him, 'Dude, you're Mr. October.'"

Kershaw worked two days after throwing 110 pitches over 6 2/3 innings in Game 4, when he had the benefit of only three days' rest following his win in the opener against the Nationals.

"Nobody wants it more than him - his tireless work ethic and how much he competes. And just for him to go up and tell them, 'Hey, I can come in and close this thing out if you need me,' just says so much about the type of player he is," said Dodgers third baseman Justin Turner, whose two-run triple in the seventh helped LA build its lead. "He's a winner. He's a champion."

How unanticipated was this work as a reliever? Several hours before Thursday's game began, Dodgers first-year manager Dave Roberts was asked whether Kershaw might be available at all - maybe just for one out, say?

"No," came Roberts' reply. "Absolutely not."

Turned out the three-time NL Cy Young Award winner would get a pair of outs in his first relief appearance since the 2009 playoffs.

"Clayton came to me in the seventh," Roberts explained, "and said that he had an inning if I needed it."

Kershaw came in after Jansen got a career-high seven outs. Jansen walked Bryce Harper and Jayson Werth with one out in the ninth - and that's when Roberts went to Kershaw.

DODGERS WIN! Fans react to the 27th out at The Post in El Monte! Highlights and more at 11! @ABC7 pic.twitter.com/kLDxmNf74Z

Kershaw wound up with his second pro save. His other came on Aug. 19, 2006, in the Gulf Coast League in a game against the Nationals' rookie club.

And Kershaw's catcher that day a decade ago?

Amazingly, none other than Jansen, who didn't begin pitching professionally until three years later.

Jansen said he couldn't recall that particular game. He assured everyone he'll never forget this one. When Kershaw walked from the dugout to the bullpen before removing his blue jacket to start warming up, he got fist bumps from teammates.

In the tunnel that leads from the dugout to the visiting clubhouse, Jansen looked up at a TV and saw Kershaw getting ready to pitch.

"I'm like, 'Wait a minute. Am I dreaming right now?' I couldn't believe it," Jansen said later, just socks on his feet and ski goggles on his head, leaning against a wall in a clubhouse hallway. "I'm like, 'Is Kersh warming up? Is he really out there?"

LA's scoring all came in a four-run seventh off six Nationals pitchers, including Joc Pederson's homer off Max Scherzer.

"It's the craziest game I've ever been a part of," said Scherzer, who took a no-hitter into the fifth . "We just didn't get it done. No one's a goat. No one made a crucial misplay. Everybody stepped up and did their game. We just didn't get that extra run."

Washington was leading 1-0 in the sixth, when Werth walked and Ryan Zimmerman smacked a two-out double to left. But third-base coach Bob Henley - whose propensity for waving runners home led to a popular T-shirt among Nationals players that says, "Send 'em short, send 'em tall, send 'em one, send 'em all" - sent Werth and saw him get thrown out easily on shortstop Corey Seager's relay.

"You live and die by those moments, sometimes," Werth said.

And in the sort of blink-and-you-missed-it game-shifting sequence, Werth's inning-ending, overzealous bid to score was followed immediately by Pederson's homer on Scherzer's first - and, it turned out, only - pitch of the seventh.

That began a rally that included a pinch-hit RBI single by 37-year-old pinch hitter Carlos Ruiz , helping LA go up 4-1.

Then came Jansen in an inning that took 66 minutes and included a total of eight pitchers.

And then came Kershaw.

The West champion Dodgers are back in the NLCS for the first time since 2013, but they've lost in their past three trips to that round, failing to make it to the World Series since they won their most recent championship in 1988.

And Kershaw had a hand in all three NLDS wins.

"Looking him in the eye, I felt good about it, and the training staff gave the OK," Roberts said, "so it's only fitting for Clayton to get the last out right there."

The Cubs were 4-3 against the Dodgers this year. The only other time they met in the postseason was the 2008 NLDS, which LA swept.

The East champion Nationals are one-and-done in the playoffs yet again, losing in the NLDS yet again. Washington was beaten in five games in 2012 by St. Louis, and in four games in 2014 by San Francisco. Take it back further, and a baseball club based in the nation's capital hasn't won a postseason series since the old Senators were the 1924 World Series champions.

"I'm not ready to go home," Nationals first-year manager Dusty Baker said. "I haven't been home since February, but I would have gladly stayed a couple more weeks."

Marc Rzepczynski was the losing pitcher.

Dodgers LHP Julio Urias, who turned 20 in August, became the youngest pitcher to appear in the postseason since Cincinnati's Don Gullett was 19 in the 1970 World Series, the Dodgers said, citing STATS. Urias entered in the fifth and threw two scoreless innings and got the win. He walked Harper, then picked him off first base.

Before this year, Roberts was best known in the postseason for his ninth-inning steal as a pinch-runner in Game of the 2004 ALCS that sparked Boston's comeback against the Yankees. He'll now also be remembered for his mound maneuvers that won this game - he used three members of his rotation, plus his closer in a career-long outing.

"These are conversations that me, the front office, we have daily, about just kind of forward-thinking, being open-minded to how you can use guys in certain roles. And today was a prime example," Roberts said.
Related topics:
sportswashingtonmlbbaseballwashington nationalsu.s. & worldlos angeles dodgers
Copyright © 2021 by The Associated Press. All Rights Reserved.
More Videos
From CNN Newsource affiliates
TOP STORIES