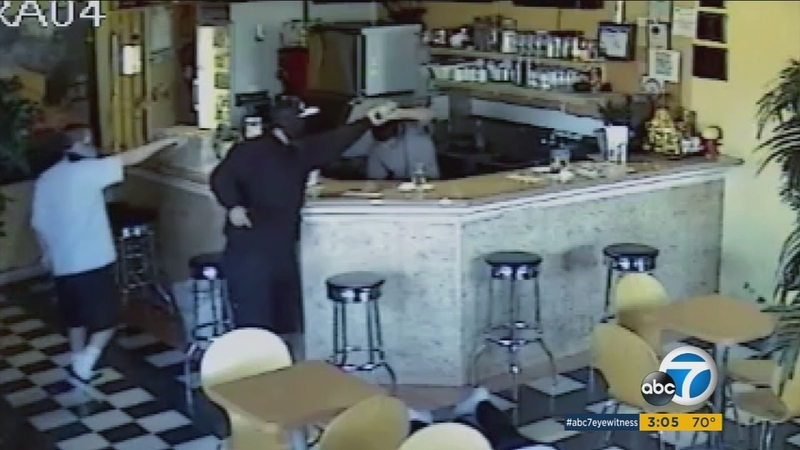 SANTA ANA, Calif. (KABC) -- Authorities are searching for two suspects who robbed a Vietnamese cafe in Santa Ana Monday afternoon, as well as a person of interest who appeared to help the robbers.

Two men wearing bandanas over their faces ran inside the M & Toi Cafe in the 4700 block of W. 1st Street, police aid. The suspects were armed with a gun and knife, pointing the weapons at customers and employees.

Authorities said right before the robbery, a man walked into the cafe, sat down at the bar area and appeared to be texting someone. Moments later, the two armed suspects burst into the cafe and demanded money.

That male customer ends up going behind the counter and pulls money out of the register for the two men. Surveillance video shows the two men ordering everyone to get on the ground and then fleeing outside. Video caught one of the suspect's faces outside as he pulled the bandana off.

"Hopefully there's somebody out there that knows that individual and we can find out who he is," Cpl. Anthony Bertagna said.

Police are also looking for the man at the counter. Officers said the way he stood next to the armed robbers and got the money for them raised an alarm.

Police said the person of interest left the scene before officers arrived.

"Texting just before the suspects come in and then what occurs while the suspects are in there are obviously things we have questions about," Bertagna said.

The first suspect was armed with a gun and is described as a man between the age of 18 and 25, has black hair, a medium build and is between 5 feet 7 inches tall and 5 feet 9 inches tall.

He was wearing a black and gray baseball cap with writing on the front, a black crew neck sweatshirt, black shorts, white tall socks, black sneakers that appeared to be similar in style to Vans shoes and he had a black bandana covering his face.

The second suspect was armed with a knife and described as a man between the age of 15 and 21, has black hair, a thin build and is between 5 feet 5 inches tall and 5 feet 7 inches tall.

He was wearing a gray short-sleeved T-shirt, black basketball shorts, white and black socks, black sneakers that appeared similar in style to Vans shoes and a bandana covering his face.

Authorities said the cafe is the third Vietnamese cafe robbed in the last two weeks in a similar fashion, and they're looking into if the incidents are connected.