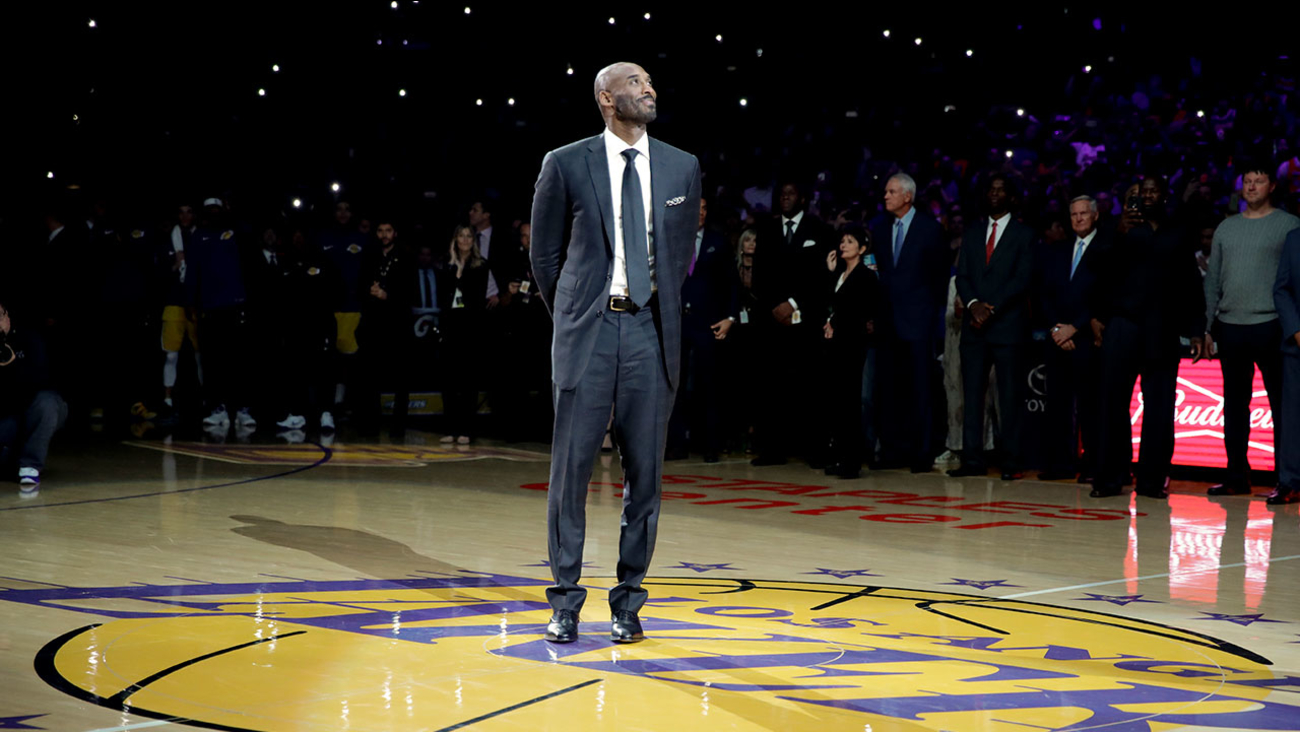 LOS ANGELES (KABC) -- Kobe Bryant played 20 seasons with the same organization, scored five NBA titles, and he once hung 81 points on the Toronto Raptors. Through it all, No. 8 and No. 24 are the pair of numbers that were immortalized at the Staples Center Monday night.

For the 10th time in team history, the Lakers honored a player with a jersey retirement ceremony, but of course, this is "The Mamba," and he had a pair of threads to add to the collection.

In an NBA first, the team decided to retire two jersey numbers worn by Bryant, the leading scorer in franchise history.

"I feel great," Bryant said after entering Staples Center while pushing a stroller containing Bianka Bella Bryant, his infant daughter. "I'm very proud I get to come here with my family. It feels good as a father to have my family come in and share this."

"To play his entire career for one organization, in modern sports, it really doesn't happen very often anymore," Walton added. "To go through two different championship runs, I think the Lakers are such a huge part of this city that people feel connected to him. ... They feel as if they were on that journey with him, with us, and I think that's why there's such a connection."

The ceremony took place at a special half-time show during a game against the Golden State Warriors. Bryant's jerseys were raised to the rafters.

The Lakers typically only retire the numbers of players enshrined in the Hall of Fame. Bryant isn't eligible until 2021, but the Lakers decided not to wait for that formality - and for Kobe, they doubled up the honor.

Bryant switched jersey numbers halfway through his career, neatly dividing the eras of his 20 years with the Lakers. The No. 8 Bryant won three NBA titles, and the No. 24 Bryant won two more before retiring in 2016 with a stunning 60-point performance in his farewell game against Utah.

Thanks to the Lakers organization and the best fans in the world. You gave a six-year-old boy his Laker dream, and I’ll always love you for it. #laker4life #DearBasketball https://t.co/8xShQUGkC3

When pressed to pick his favorite era, Bryant reluctantly did it.

"If 8 is playing 24 after he just ruptured his Achilles, then it's a problem for 24," Bryant said. "If 24 is playing 8 when he tore his shoulder, it's a problem for No. 8. so it depends. ... It's really, really tough for me. I think 24 was more challenging, and I tend to gravitate to things that are harder to do, and physically for me, it was really hard to get up night in and night out. It was really a grind."

The Lakers celebrated by closing down the street outside Staples Center and staging a street fair dubbed "Kobeland," complete with a Ferris wheel and many other games and attractions. Thousands of fans crowded into the downtown streets several hours before the game just to appreciate the atmosphere.

The architect behind Bryant's NBA titles wasn't in the building. Phil Jackson was unable to travel from his Montana home for the ceremony, but he did congratulate him on Twitter.

Congratulations Kobe Bryant! Hail Momba, too. Two Jersey’s retired is one way to measure your impact for the Lakers. The GOAT measure is:🏆🏆🏆🏆🏆

Congratulations to my good friend @kobebryant. It's been a pleasure witnessing your career and seeing how you transformed the Lakers. Well deserved! pic.twitter.com/ovMX9AzSZN

You know you’ve earned being called the #Mamba when you get two jerseys retired! Congratulations on a storied career, @KobeBryant. You’re one of the greatest to ever play the game. #Ko8e24

Congrats @kobebryant!! Dayuumm man NOT1, NOT 2.. ok it is 2 jerseys going up! Amazing G and appreciate the inspiration from a far u didn't know growing up! #Ko8e24 #Mamba🐍 #Immortalized