El Monte police located Brian Noah Morgan's vehicle about 10:30 p.m. in that city and took him into custody, according to a statement issued by the Santa Monica Police Department.

Morgan, 24, was booked on suspicion of conspiracy, robbery and parole violation. He was being held without bail.

His alleged accomplice, a male juvenile, had been apprehended after an hourslong standoff with police in the aftermath of the home invasion, the news release said. The juvenile was booked for attempted homicide, conspiracy, parole violation and two counts of robbery.

The two victims remained hospitalized and are expected to survive, family members said.

The incident began shortly before 6 p.m. in the 200 block of 19th Street, where the two suspects allegedly entered a house and demanded money.

According to relatives of the victims, the intruders struck the 19-year-old son with a hammer or hatchet, and his father was stabbed 15 to 20 times after trying to intervene.

"There was an ambulance leaving, and there was a mom inside and she was just ... bloody hands, face, and she was screaming, 'Pray for him,'" said nearby resident Kia Kohanzad.

Neighbors said the elder man is Imtiaz Tar, vice president of Bernini, a high-end clothing company based in Beverly Hills. Bernini has stores on Rodeo Drive and at the Caesars Palace hotel in Las Vegas.

An ever-changing collection of luxury cars regularly has been seen in front of the Santa Monica home where the incident took place, according to local residents.

"There has been an increase in property-related crimes, residential-type burglaries" in the area, police Sgt. Saul Rodriguez said. "So, again, we're trying to do our best to have as many officers as we can."

Anyone with information about the attack is encouraged to contact Detective Goodwin at (310) 458-8942, Detective Leone at (310) 458-8949, or the Santa Monica Police Department (310) 458-8491.
Related topics:
santa monicalos angeles countysearchhome invasionbarricadestabbing
Copyright © 2020 KABC-TV. All Rights Reserved.
RELATED 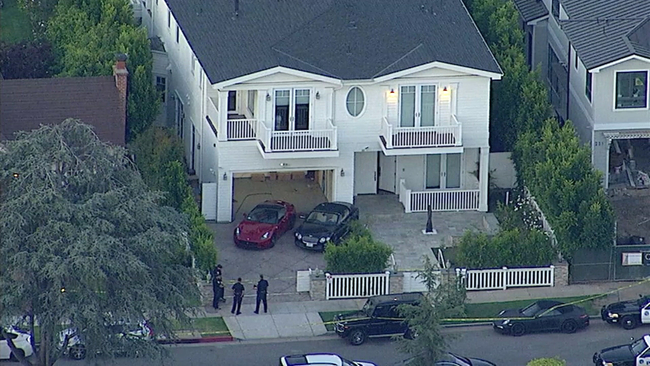