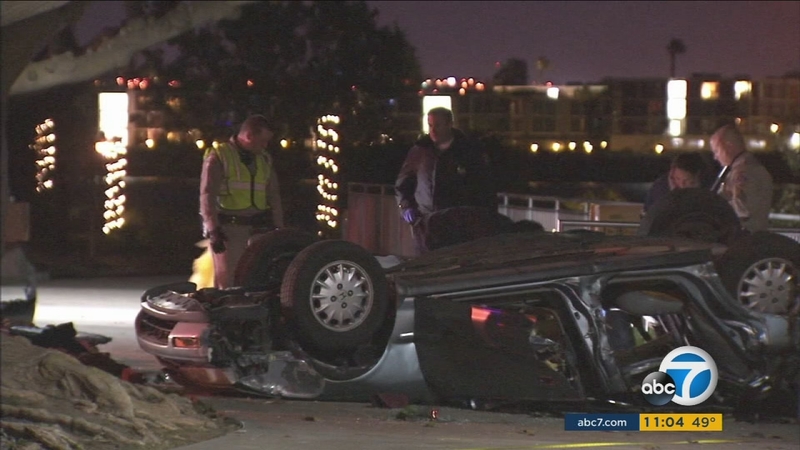 MARINA DEL REY, Calif. (KABC) -- Three people were killed and one was hospitalized after a car overturned in Marina Del Rey Monday night.

Authorities said a Honda sedan lost control as it went through a bend in the road, slammed into a tree and landed upside down in the 100 block of Via Marina Court. Los Angeles City and Los Angeles County firefighters responded to the scene.

Two people were ejected from the car, authorities said, and two men and one woman were pronounced dead at the scene.

A woman was transported to a local trauma center in critical condition. The victims were all between the ages of 18 and 25. They have not been identified.

A tow truck removed what remained of the crushed car later in the evening. The coroner will determine if drugs or alcohol were involved in the crash.

It was unclear how fast the car was going, but witnesses told California Highway Patrol officers it appeared to be going as fast at 50 mph. The recommended speed limit for the curve in that area is 20 mph.

Residents said the area where the accident happened, which is along a channel, is a popular spot for pedestrians, especially during the summer.

"There's kids always playing the park - little kids. It could have been so much worse if any of those little babies could have been hit - or anybody just walking their dog," one resident said.