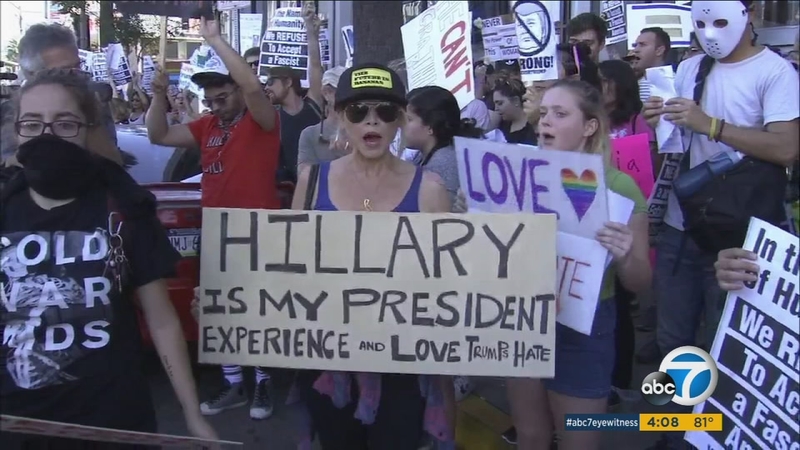 HOLLYWOOD, LOS ANGELES (KABC) -- A dense crowd of at least 300 protesters gathered to rally against the election of President-elect Donald Trump on Sunday.

Demonstrators united at about 11 a.m. in Hollywood to march from Hollywood Boulevard and Western Avenue to the CNN Building.

Protesters could be heard chanting,"We reject the president elect." The event, organized by a 15-year-old girl, drew peaceful protesters.

"To see something that I put together bring out so many people from far and wide, from different ages, it just gives me more strength to want to keep going," event organizer Wallace Mulligan said.

On Saturday morning, nearly 8,000 people marched from MacArthur Park to the Federal Building in downtown Los Angeles. Protests continued well into the night with a crowd of at least 200.


In all, five people were arrested, four for vandalism and one for battery on a police officer, according to a statement from the Los Angeles Police Department. Authorities went on to say that Saturday's protests were generally peaceful.

"The vast majority of Angelenos proved to the world you can speak your mind in a safe and respectful way," the statement read.


The outcome of the election has prompted people to protest in the streets.

"I signed the petition, I'll do whatever is possible. If that's not possible and he is our president I will be respectful," protester Laura Leigh Hughes said.

Protesters said they are concerned about Trump's potential cabinet picks and the direction his administration will take over the next four years.