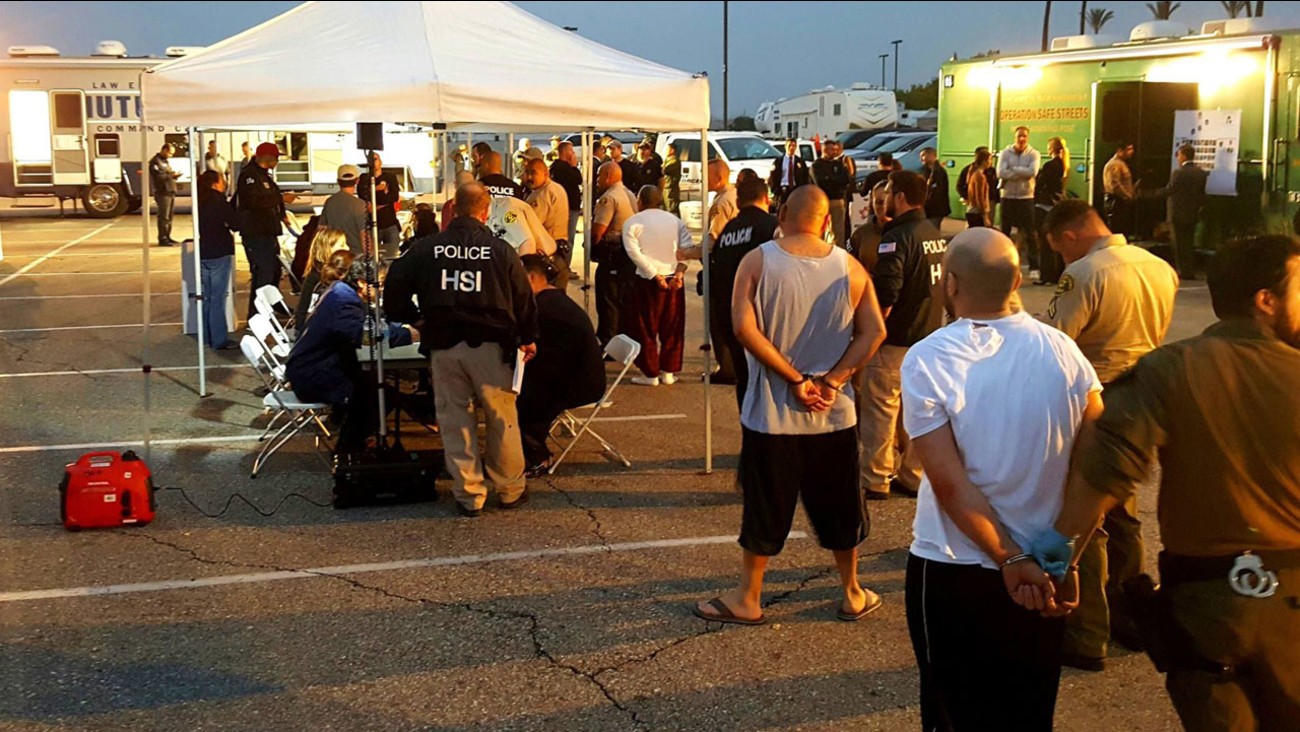 Many of the arrests were done in Whittier and Santa Fe Springs, but three of them were made in Northern California and Arizona.

The arrests come as part of 3-year investigation into the Canta Ranas gang, culminating in a sting called Operation "Frog Legs." The arrests were also based on a federal grand jury indictment issued last week, according to prosecutors.

The gang is one of many that take orders from a prison gang - the Mexican Mafia - that regulates drug-dealing territories and protects imprisoned street gang members in exchange for receiving a portion of criminal proceeds in the form of "taxes" or "rent," according to the indictment.

Gang members passed on coded orders or described activities through phone calls, prison visits, text messages and via Facebook, according to the indictment.

"As this indictment charges, the Canta Ranas gang is a root cause of violence and drugs in multiple communities here in Southern California," U.S. Attorney Eileen M. Decker said. "The (Racketeer Influenced and Corrupt Organizations Act) statutes are designed to target criminal enterprises like Canta Ranas, and RICO prosecutions like this one, which target the top leaders of the gang, help make whole communities safer."

The indictment names 51 people. The alleged Mexican Mafia controller of the Canta Ranas gang, identified in the indictment only as D.G., is already serving a life sentence without parole at Pelican Bay federal prison in Northern California.

It also names Jose Loza, 37, of Whittier, as one of the main defendants and claims he is suspected of killing another member of the Mexican Mafia who wanted to challenge D.G.'s authorities over street gangs in the San Gabriel Valley.

The man was killed on April 19 during a shooting at a restaurant in the area of Bassett. The man was shot to death, his bodyguard was severely injured and an innocent bystander was shot six times in the stomach, according to authorities.

The indictment also state that Loza and D.G. were part of the Canta Ranas group and tried to kill a Whittier police detective who was conducting undercover surveillance as part of a narcotics investigation.

All 51 of the defendants in the indictment face conspiracy to violate the RICO Act and a second conspiracy to distribute drugs, including allegations of smuggling controlled substances such as heroin into county jails.

Many of the defendants also face about 11 counts of drug trafficking, 13 gun offenses and conspiracy to commit money laundering charges.

Loza remains jailed without bail, and it was not immediately clear whether he had an attorney. Authorities also continue to search for eight other people named in the indictment.