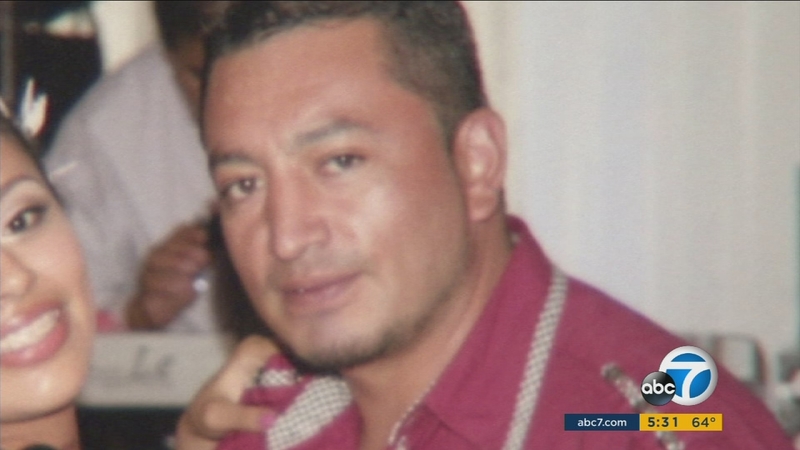 SANTA ANA, Calif. (KABC) -- A search is underway for the driver behind a hit-and-run crash that killed a pedestrian in Santa Ana.

The incident was reported around 1:45 a.m. Sunday in the 1200 block of West 1st Street near Baker Street.

Responding Santa Ana police officers found 35-year-old Jorge Lopez-Lobato at the center of the median. He was pronounced dead at the scene.

The family of Lopez-Lobato spoke out Tuesday and asked the driver to come forward.

"He was a fun-loving uncle. He was a very loving person," said Andrea Sanchez, the victim's niece.

Lopez-Lobato's family said he was walking home from a friend's house after watching a soccer game when he was hit while crossing the street.

Witnesses told police that the car involved in the deadly crash sped up after the collision, traveling westbound on 1st Street, then southbound on Bristol Street.

One witness described the vehicle as a new-model four-door Honda Accord in a midnight blue color with tinted windows.

The Santa Ana Police Department released this stock photo of a Honda Accord similar to the vehicle involved in a fatal hit-and-run crash on Sunday, Nov. 29, 2015.

Investigators found the car's driver's side mirror and the front bumper assembly at the scene of the crash. Officials said the vehicle likely sustained substantial front-end damage. The impact was so violent, an air intake device was ripped from under the hood.

Lopez-Lobato's family said they hope the suspect realizes the pain they caused.

"If you're a father then you understand the pain that their parents are going through,' said Sanchez. "Their parents are not near here, so they didn't have the fortune to see him one last time."