4 Killed Aboard Plane That Crashed on Atlanta Highway 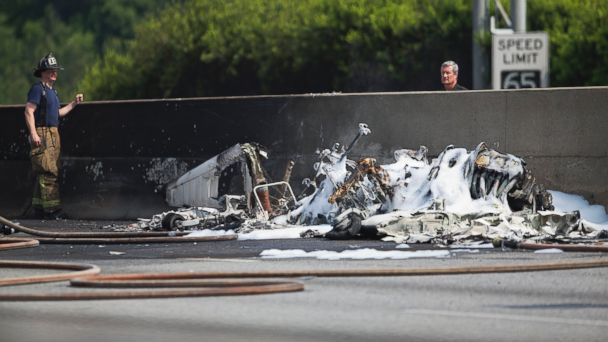 Four people aboard a small plane were killed after the plane crashed on a busy stretch of an Atlanta highway this morning, Captain Eric Jackson of the Dekalb County Fire Rescue Department said.

The Federal Aviation Administration said the plane, a Piper PA-32, had just departed Atlanta's DeKalb-Peachtree Airport. The pilot "reported an issue on take-off," according to ABC affiliate WSB-TV in Atlanta.

The plane crashed up against the median of the busy Interstate-285 and caught fire.

A man at the scene, Don McGee, described the crash as "like a bomb being dropped," WSB reported.

Gerald Smith told WSB he was driving a tractor trailer when he was almost hit by the plane.

"It was flying very low. It wasn't higher than the top of my truck," he said. "I guess it was just god telling me to slam on my brakes.. by the time I did hit the brakes, I heard an impact hit the front of my truck. "

Smith said, after he stopped the truck, "I looked back to my left ... and that plane was up against the wall burning."

The cause of the crash is unknown, said Eric Alleyne, an air safety investigator with the National Transportation Safety Board.

The investigation is ongoing, according to the NTSB, and will include looking at maintenance records and the pilot's experience.

The wreckage of the plane will be moved to 40 miles south to Griffin, Georgia, later today, where it will be reconstructed as a part of the investigation, the NTSB said. The road will reopen once the plane is removed, officials said.

The highway reopened in the late afternoon.