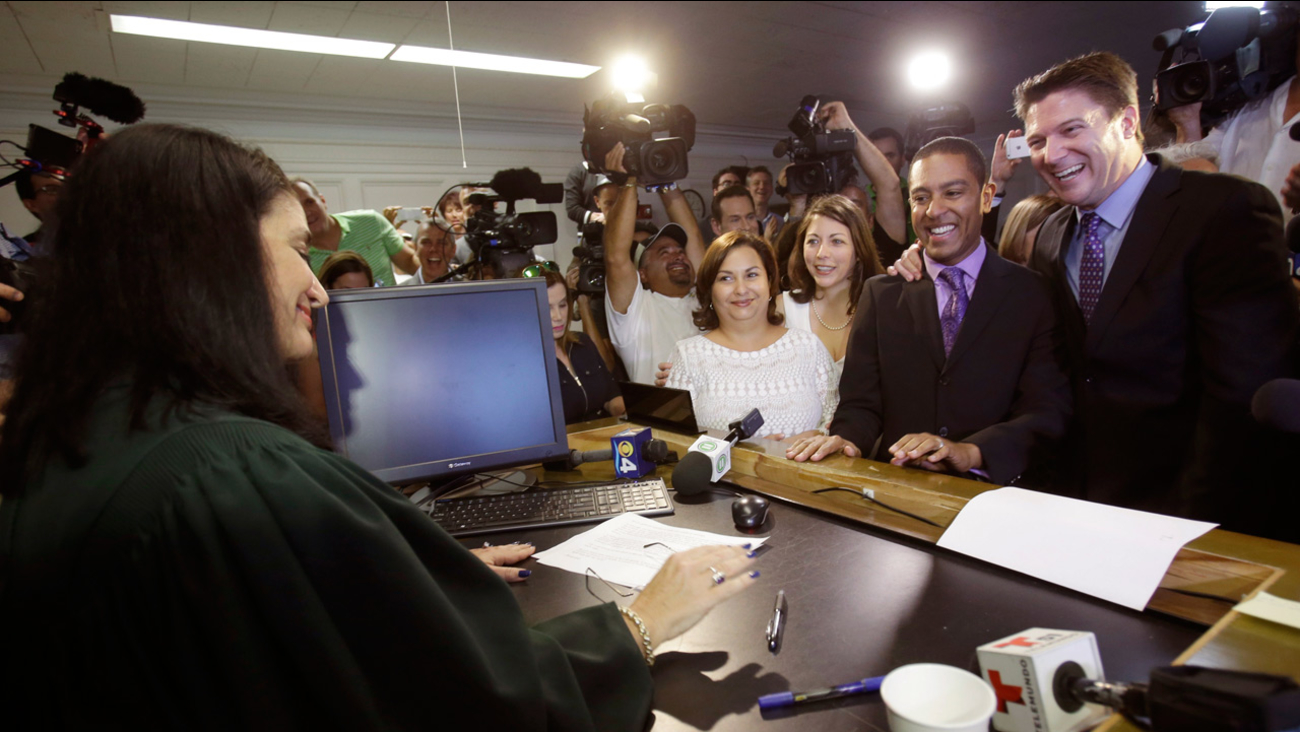 MIAMI -- Lesbian and gay couples were wed in Miami on Monday by the same judge who approved their marriage licenses, hours before Florida's coming-out party as the nation's 36th state where same-sex marriages are legal statewide.

The addition of Florida's 19.9 million people means 70 percent of Americans now live in states where gay marriage is legal.

The cheers in the courthouse reflect how much the nation's third-largest state has changed since the days of Anita Bryant, the former beauty pageant queen and orange juice spokeswoman who started her national campaign against gay rights in Miami in the 1970s.

"It's been a long time coming," said Cathy Pareto, who wed Karla Arguello, her partner of 15 years. "Finally Florida recognizes us as a couple. It's just, I don't know, sweet justice."

But signs of opposition were evident farther north, where more conservative Floridians live.

In Jacksonville, Duval County Court Clerk Ronnie Fussell shut down the courthouse chapel, saying no marriage ceremonies -- either gay or straight -- would be allowed there. At least two other counties in northeast Florida did the same.

"Mr. Fussell said some of his people felt a little uncomfortable doing it," said his spokesman, Charlie Broward. "It could cause discriminations down there (in the marriage license department) with those who are uncomfortable. We wanted to eliminate any unfairness."

Then, she presided over a dual ceremony, marrying Todd and Jeff Delmay moments after the lesbian couple in chambers packed with supporters and news media. The women work in investment banking, and have an adopted 2-year-old son. The Delmays, together nearly 12 years, have a 4-year-old adopted son and operate an event-planning business.

Todd and Jeff legally changed their last names to Delmay - an amalgamation of their prior surnames - and have worn wedding rings on their right hands for years. On Monday, they switched them to the left.

"It's such a journey we've been on. We're just thrilled," said Todd Delmay. "We're thrilled for everybody. It's such a transformative time."

More weddings were planned Tuesday in large-scale ceremonies in Orlando, Tampa, Key West and Broward County. Palm Beach was preparing for a flood of applications, and a courthouse in Delray Beach was opening Monday night to officiate at a mass wedding after midnight.

And Florida's northern counties may see an influx of license applications by couples from other Southern states where marriage bans remain in place.

Sean Hudson, a spokesman for the state clerks' association, said "the clerks are going to do what their duty is" and issue marriage licenses to any same-sex couples seeking them, even though some will no longer perform weddings, which is an optional part of their job.

Florida's constitution was amended with a 62-38 percent vote to ban same-sex marriages in 2008. But judges in Florida, as in many other states, found that such bans violate the U.S. Constitution's guarantees of equal treatment and due process.

Although same-sex marriage is now reality in Florida, Attorney General Pam Bondi is still pursuing appeals at both the federal and state levels. Her position - shared by former Florida Gov. Jeb Bush, now considering a run for president - is that marriage should be defined by each state.

Tellingly, however, the 11th U.S. Circuit Court of Appeals and then the U.S. Supreme Court refused Bondi's request to extend an order blocking same-sex marriages beyond Monday, essentially giving the green light to the weddings taking place now. And Bondi's office didn't even appear at Zabel's hearing; One of her attorneys said by telephone that the state wouldn't oppose the clerk issuing the first licenses.

"This is a pivotal moment not just for Miami but for the entire country. Florida is a bellwether state, and I can think of no more encouraging sign as the U.S. Supreme Court prepares to decide whether to resolve this issue for the entire country at its next conference on January 9," said Shannon Minter, legal director for the National Center for Lesbian Rights.

Still, opponents weren't giving up without a fight. Liberty Counsel, a conservative legal group based, planned to keep trying to block clerks from issuing licenses, even though previous attempts were dismissed in court. "That some clerks may issue licenses against the law doesn't obviate any of the appeals," said the group's lawyer, Horatio "Harry" Mihet.

"They're saying I'm a bigot and have hatred for the homosexuals," she told The AP in 1977. "I don't hate homosexuals. I love them enough to tell them the truth: that God puts them in the category with other sinners."