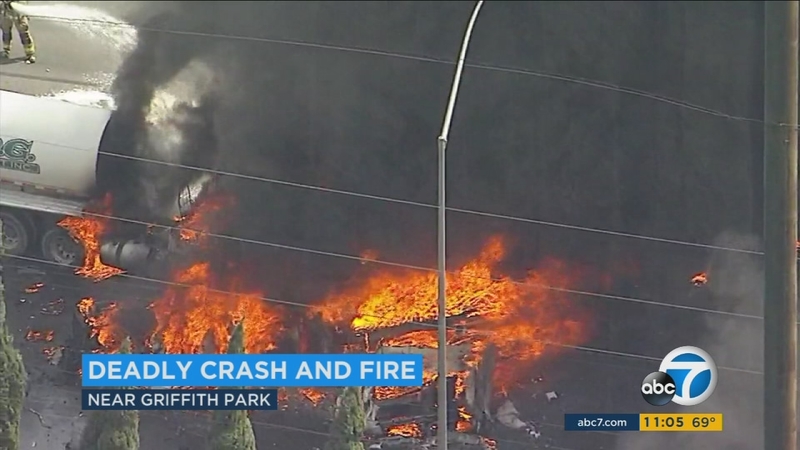 GRIFFITH PARK, LOS ANGELES (KABC) -- One person was killed and 10 others were injured in a crash involving two big rigs on the 5 Freeway Tuesday morning in the Griffith Park area, prompting a full closure of all lanes in both directions.

The eight-vehicle collision occurred shortly before 11 a.m. on the freeway near Los Feliz Boulevard, generating a dramatic fire and a response from the California Highway Patrol and Los Angeles Fire Department. The bulk of the flames were extinguished by 11:30 a.m.

CHP said a preliminary investigation indicated that the semitruck driver lost control of the vehicle and that it traveled west across all northbound lanes. The vehicle crashed into other cars and smashed through the center divider onto the southbound lanes.

Emergency responders placed red, yellow and green tarpaulins in a triage area that was set up on the freeway as a plume of black smoke lingered overhead.

Fire officials said there were 11 patients when they arrived at the scene ranging in age from 22 to 71. Injuries ranged from minor to major, authorities said.

One of the victims was pronounced dead at the scene, according to the fire department. Details of the fatality were unknown, as was the deceased victim's identity. Officials said it was unclear which vehicle the deceased victim was inside at the time of the crash.

One person, identified as 25-year-old Kimberly Busacay, of Chatsworth, was critically injured and rushed to LAC+USC Medical Center, according to officials. Firefighters said nine others were treated and taken to the hospital with minor injuries.

A dog, which was in one of the semitrucks, also died due to the crash, the fire department said. The name of the person killed was being withheld pending notification of next of kin.

Traffic was seen backing up for miles after a fatal multi-vehicle crash on the 5 Freeway near Griffith Park.

Officials said crews could be at the scene until at 10 p.m. as they worked to remove the wreckage and clean up spilled oil. CHP said transitions from the 134 Freeway to the 5 Freeway would be closed to help traffic.

Lanes on the northbound 5 Freeway began reopening around 2 p.m., though southbound lanes were closed until shortly before 7 p.m.

The cause of the crash was under investigation. Authorities said it was unknown if drugs or alcohol were a factor.
Related topics:
griffith parklos angeleslos angeles countytraffic fatalitieschpsemi crashfreewaylos angeles fire departmenttrafficcrash
Copyright © 2021 KABC-TV. All Rights Reserved.
More Videos
From CNN Newsource affiliates
TOP STORIES