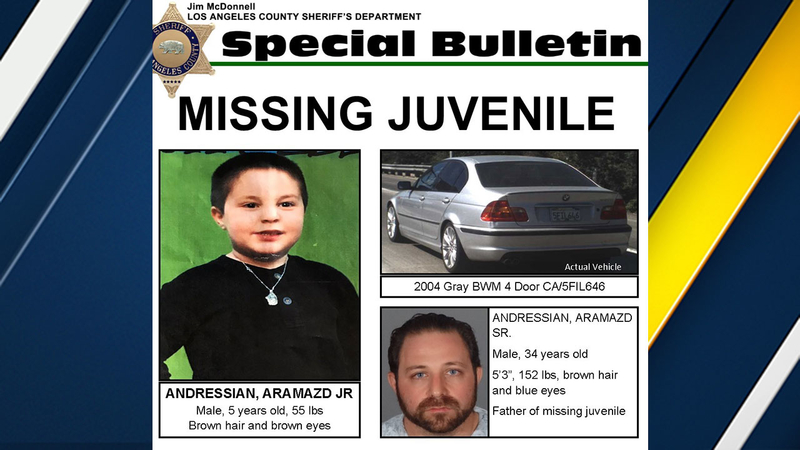 SOUTH PASADENA, Calif. (KABC) -- The search continued Sunday for a 5-year-old boy who was reported missing after his father was found unconscious at a park in South Pasadena Saturday morning.

The father, 35-year-old Aramazd Andressian, was arrested after an hours-long investigation on suspicion of child abduction and child endangerment, police said.

In an update on the search Sunday afternoon, officials said they still had not located the boy. They continued questioning his father, but described his statements as "convoluted and not consistent" as well as "contradictory."

Authorities also asked the public to report if they had recently spotted the father's car, described as a silver four-door 2004 BMW with CA license plate 5FIL646. The car was previously seen early Friday morning in Orange County.

Authorities asked anyone who had recently seen this silver 2004 BMW with CA license plate 5FIL646 to contact South Pasadena police.

Police Chief Art Miller said around 6:30 a.m. Saturday, the fire department received calls regarding a man passed out near a car in Arroyo Park. The man, later identified as Andressian, was then taken to a hospital.

South Pasadena police then responded to the scene and impounded the vehicle. Around 9 a.m., a mother called San Marino police and told them her husband had not exchanged their child as they had scheduled to do in the city.

She provided police with information and they were able to connect the impounded car to Andressian. Authorities said the couple are in the process of divorce and a custody battle.

The child, named Aramazd Andressian Jr., may have been in the car with his father, but authorities said the child's father went back and forth on that information during questioning.

"When we found out the boy was missing we don't know if he crawled out of the car himself, if he walked away, if he was abducted - we have no idea," Miller said.

The little boy is described as weighing 55 pounds, with brown hair and brown eyes. He was last seen wearing a turquoise shirt and plaid shorts. He has a small mole on the bottom of his right shoulder.

Miller said multiple agencies aided in the search Saturday, with LAPD bloodhounds scouring Arroyo Park at least four times. Helicopters also used infrared technology to see if they could detect the child. They called off the search of the park around 3 a.m. Sunday. 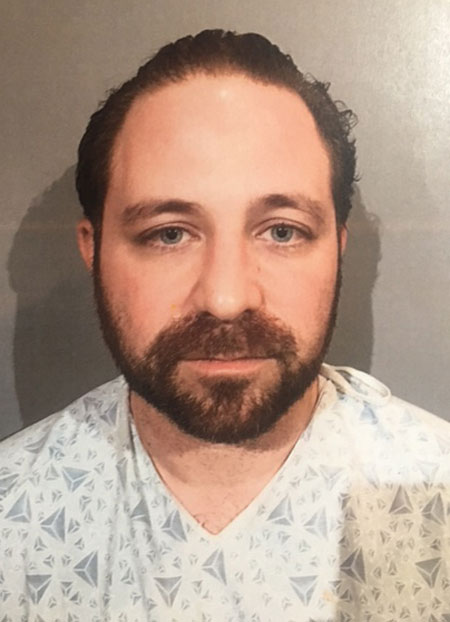 Aramazd Andressian, 35, is shown in a police mugshot.

Authorities said there was no evidence of a struggle when the father was found passed out. The father was released from the hospital sometime Saturday evening. Police then interviewed him for several hours before arresting him.

He was ordered held on $10 million bail and remained in custody Sunday night.

Miller said the father appeared to have "a very selective memory" when it came to recalling what happened to his son. Miller said it had been a frustrating interview.

"To become unconscious when you're supposed to be in the care of a child, that's where our main concerns are," Miller said.

Authorities did not say if the child may have been harmed by his father. It was still unclear how and why the father passed out.

In an earlier Facebook post, the department posted that Aramazd Andressian Jr. was last seen over a Skype broadcast on Tuesday by his mother.

The mother said she and Andressian split custody of her son. She said each week the child goes with one parent and there are two Skype sessions that go on during the visits. She said the first session happened, but one set for Thursday did not.

Authorities said the search for the boy would "take as long as necessary." Miller said he hopes the child is out somewhere in good hands and that police can reunite him with his family.