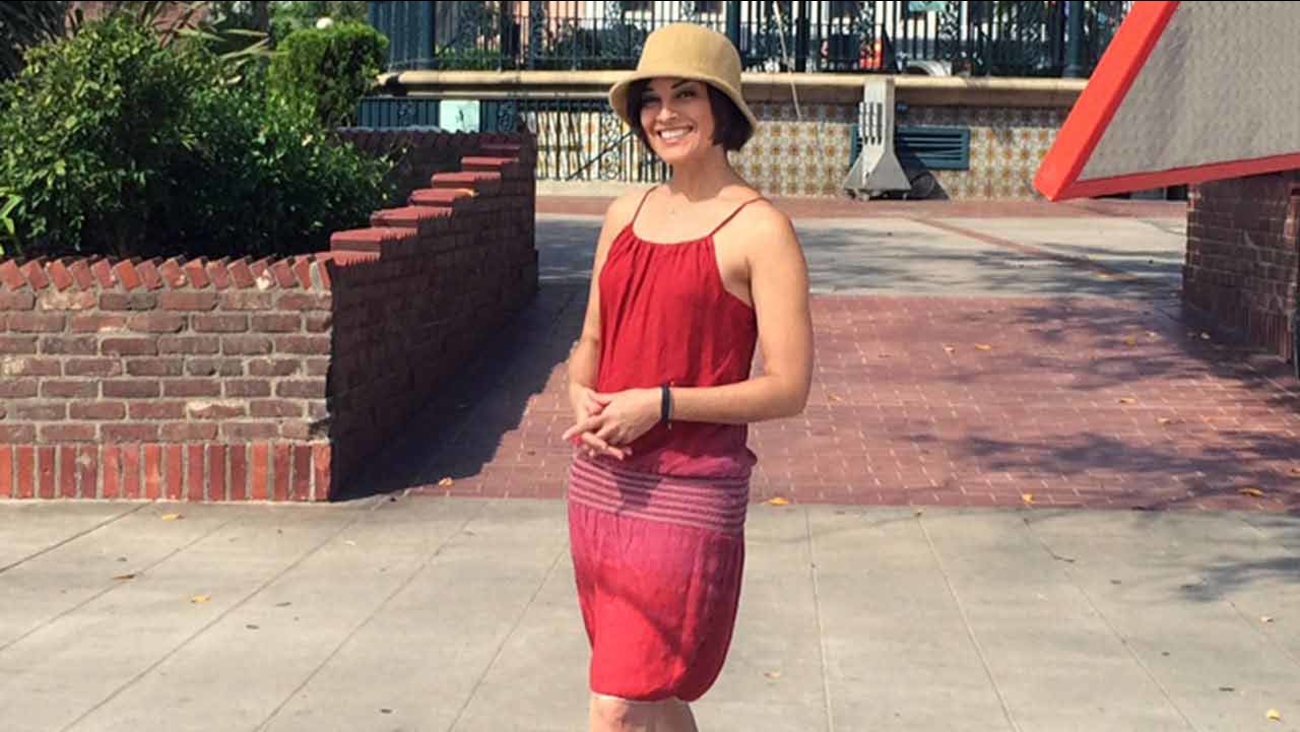 Host Tina Malave is shown on the set of 'Eye on L.A.' (KABC)

LOS ANGELES (KABC) -- Eye on L.A.'s Tina Malave takes us on an interesting trip back in time to see what things were like, back in the day of old Los Angeles! Not surprisingly, some of those places from way back when are still considered some of the best in the city today!

L.A.'s first home (or homes) is a controversial topic. Is it the Avila Adobe on Olvera Street or the Sanchez Adobe on La Cienega Ranch? There are a few homes that are now historical museums like Leonis Adobe, the Pasadena History Museum and the Bembridge House. We also visited the Saugus Cafe, L.A. County's first restaurant.

Avila Adobe on Olvera Street
Avila Adobe at the El Pueblo Historical Monument is considered to be the oldest house in Los Angeles. Built in 1818, it is the most visited site on Olvera Street. However, others believe the Sanchez Adobe in Baldwin Hills might be the oldest home in Los Angeles County. It was possibly built as early as 1791.
www.zoomparkcity.com

Sanchez Adobe at La Cienega Ranch
Possibly built as early as 1791, some experts now believe the Sanchez Adobe in Baldwin Hills might be the oldest home in Los Angeles County. The Sanchez Adobe is available for private functions and meetings. Contact the Consolidated Board of Realtists at (323) 299-5570 for more information.
3725 Don Felipe Drive
Los Angeles, CA 90008
(323) 299-5570

Leonis Adobe Museum
As Los Angeles' Historic-Cultural Monument No. 1, the Leonis Adobe Museum was originally built in 1844 in Calabasas. Today, this museum home provides an intriguing look into L.A.'s past showing what life in the Old West was like during those days.
http://leonisadobemuseum.org
www.passport2history.com

The Bembridge House
Considered the most ornate Victorian-style home in Long Beach, the Bembridge House was built in 1906. This historic monument has 18 rooms and was named after Dorothy Bembridge, a musician who lived most of her life here.
www.lbheritage.org

L.A. COUNTY'S FIRST RESTAURANT
It's thought to be the oldest restaurant in L.A. County. The Saugus Cafe in Santa Clarita opened in 1886 and it's still serving the locals. 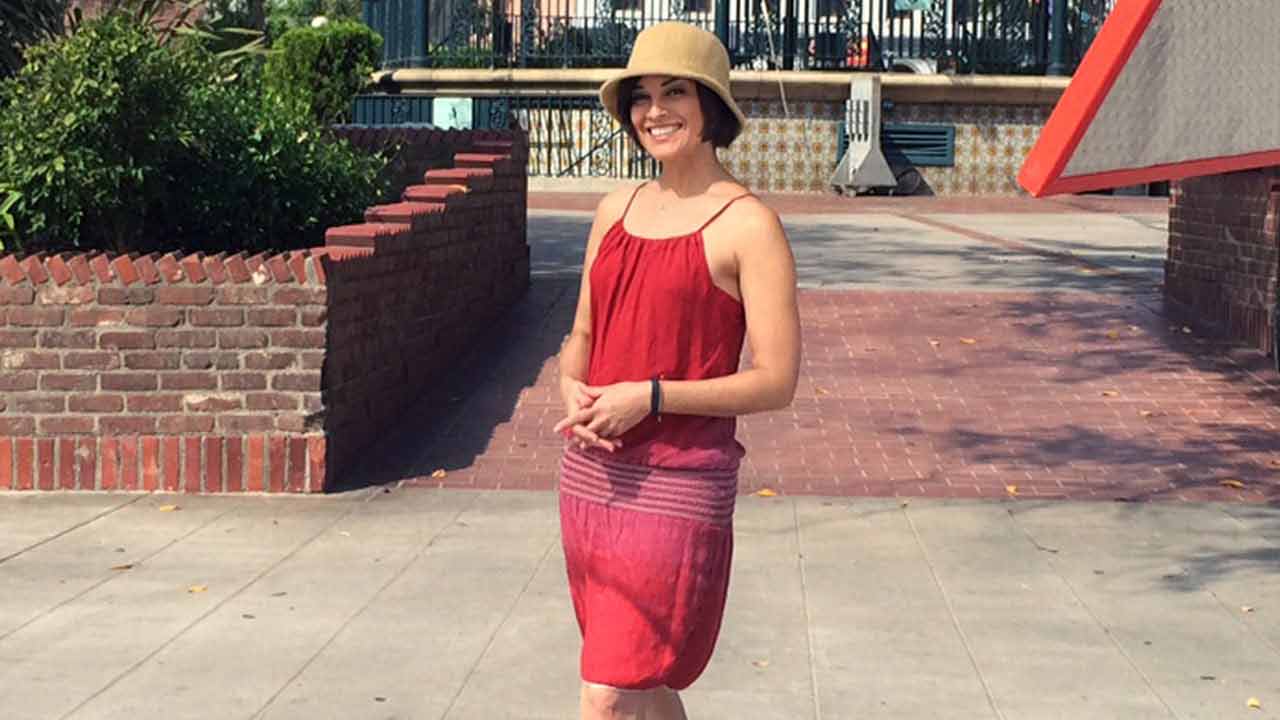 VIDEO: 'Eye on L.A.' visits historical homes in Los Angeles
'Eye on L.A.' visits L.A.'s first home - it's a controversial topic. Is it the Avila Adobe on Olvera Street or the Sanchez Adobe on La Cienega Ranch?
Cheers to L.A. and some of the first bars are still around! Cole's, La Golondrina, El Paseo Inn and King Eddy Saloon. Did you know that L.A. once had a French Quarter?

L.A.'S FIRST POST-PROHIBITION WATERING HOLES
In April of 1933, the board of police commissioners issued the first post-prohibition beer and wine licenses in L.A., and many of these places still exist! Here's a list of L.A's oldest watering holes, where you can enjoy a cocktail with a side of history!

L.A.'s FRENCH QUARTER?
Back in the late 1800s immigrants from around the world came and settled into small enclaves of downtown L.A. In fact, the neighborhood surrounding Commercial Street was considered L.A.'s "French Quarter." Today, the only thing that remains from the French Quarter, is Taix French Restaurant, which opened its doors in 1927 and relocated to Echo Park in 1962, but has been in continuous operation for over 87 years!

THE LAST-STANDING WINERY IN L.A.
With vineyards that once stretched across Los Angeles, Orange, San Bernardino and Riverside Counties, several wineries used to call L.A. home. In fact, Southern California was once the premier grape-growing appellation in all of California! The San Antonio Winery is the last remaining winery in Downtown L.A., a hidden gem and historical landmark operating in the same community where it was founded over 97 years ago.
San Antonio Winery
www.sanantoniowinery.com 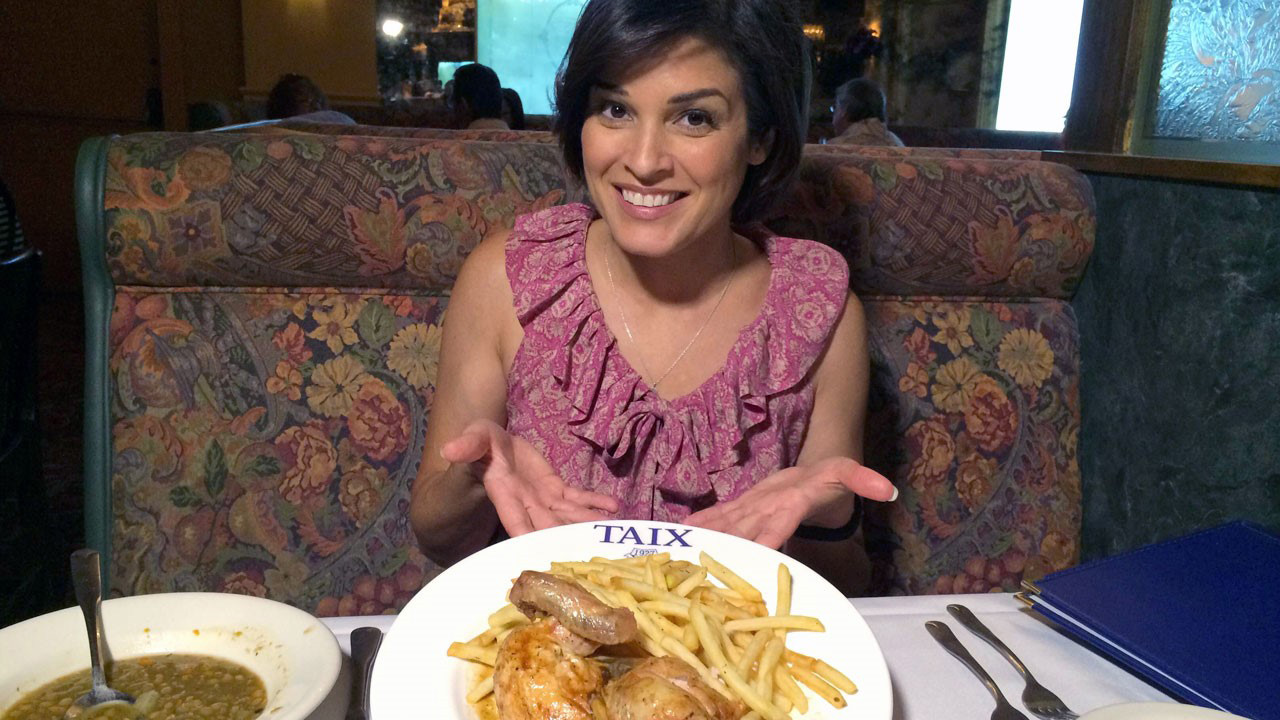 VIDEO: 'Eye on L.A.' revels at the first bars of Los Angeles
Cheers to L.A. and some of the first bars are still around!
Where Hollywood was really born with producer Jesse Lasky and director/producer Cecil B. DeMille, and the Hollywood Heritage Museum. And check out genuine L.A. at the Ford Theatre.

HOLLYWOOD WAS BORN IN A BARN!
It's hard to believe that the city now considered the "entertainment capital of the world," was once all dirt roads and a farm town! And thanks to the preservation efforts of Hollywood Heritage, the Lasky-DeMille Barn where Hollywood's first feature length film was born is still around today. Now it's the Hollywood Heritage Museum, and you can stop by and experience its history for yourself.

The Lasky-DeMille Barn/Hollywood Heritage Museum
Located in Parking Lot D - across from the Hollywood Bowl
www.hollywoodheritage.org/museum/museum.html

"GENUINE L.A." AT THE FORD THEATRE
Built in 1920, the Ford Theatre is another one of L.A.'s hidden historical gems. This gorgeous and intimate venue brings "Genuine L.A." entertainment to its stage.
For a list of upcoming shows go to: www.fordtheatres.org 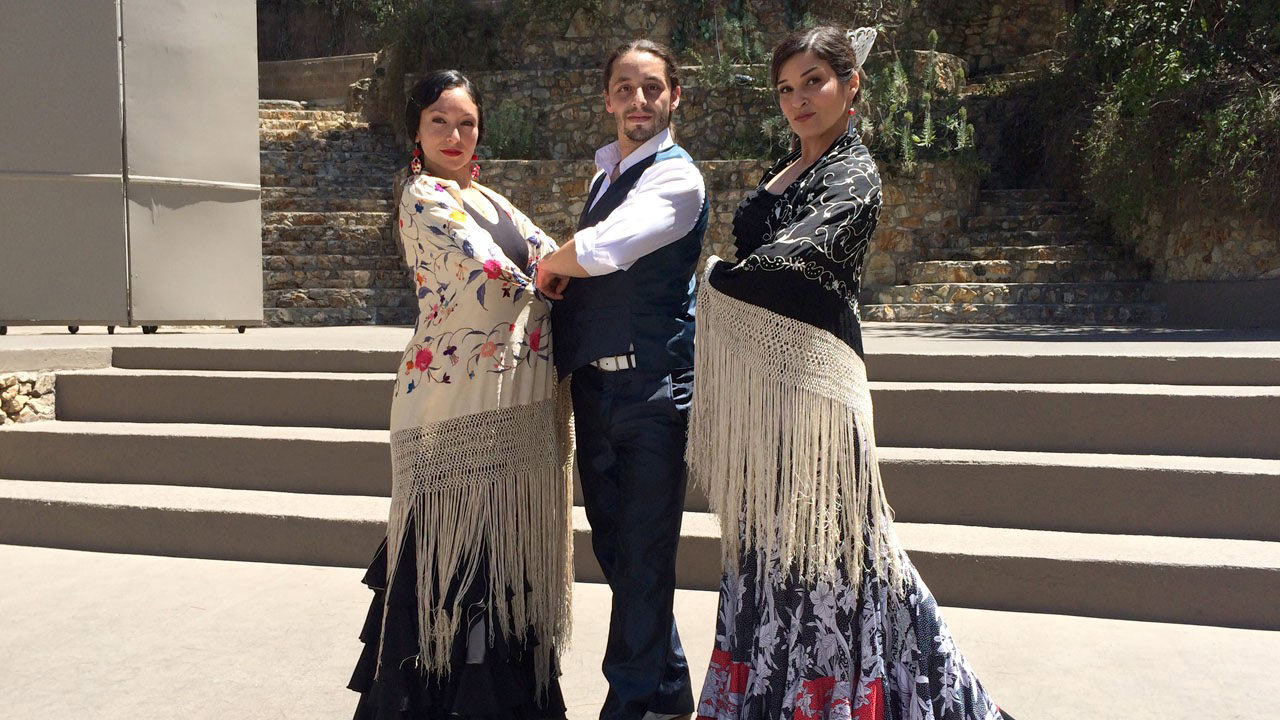 VIDEO: 'Eye on L.A.' rediscovers cultural gems
'Eye on LA' checks out the city's cultural favorites, including the Hollywood Heritage Museum and the Ford Theatre.
More L.A. originals from the original ideas behind Forest Lawn, and the first sweet shops in L.A.-Fugetsu-Do and Mikawaya, and L.A.'s first open-air market and food hall-The Grand Central Market.

FOREST LAWN
The folks at Forest Lawn want to make sure that you know it's more than just a cemetery. They have churches and museums, and other things for you to enjoy year-round. They've even been the venue for thousands of weddings! There are several Forest Lawn locations in SoCal. The one we visited in tonight's show is in Glendale.
http://forestlawn.com

L.A.'S ORIGINAL CONFECTIONERS
Two Japanese sweets shops in Little Tokyo are among the oldest food establishments in Los Angeles.
Founded in 1903, Fugetsu-do has been making the Japanese treat mochi in Downown L.A. for over 110 years! And if you're a fan of mochi ice cream, you can thank Mikawaya, which opened its doors in Little Tokyo in 1910 and is credited with introducing mochi ice cream to the United States in 1994. 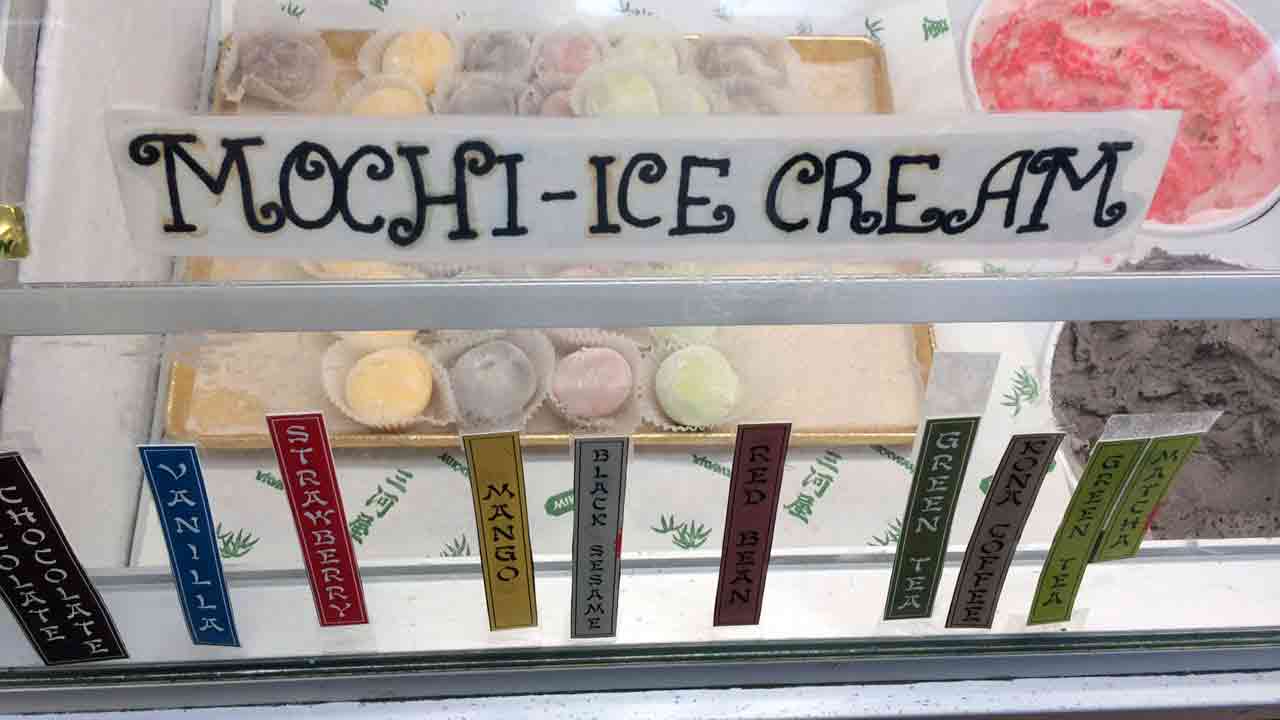 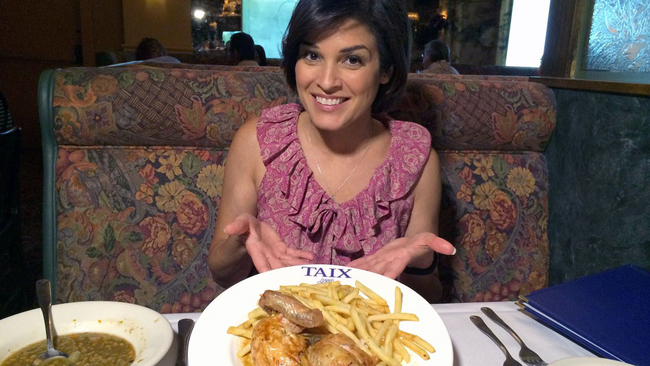 VIDEO: 'Eye on L.A.' revels at the first bars of Los Angeles 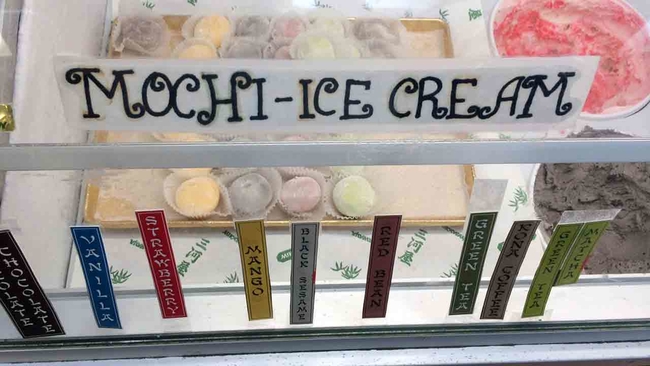