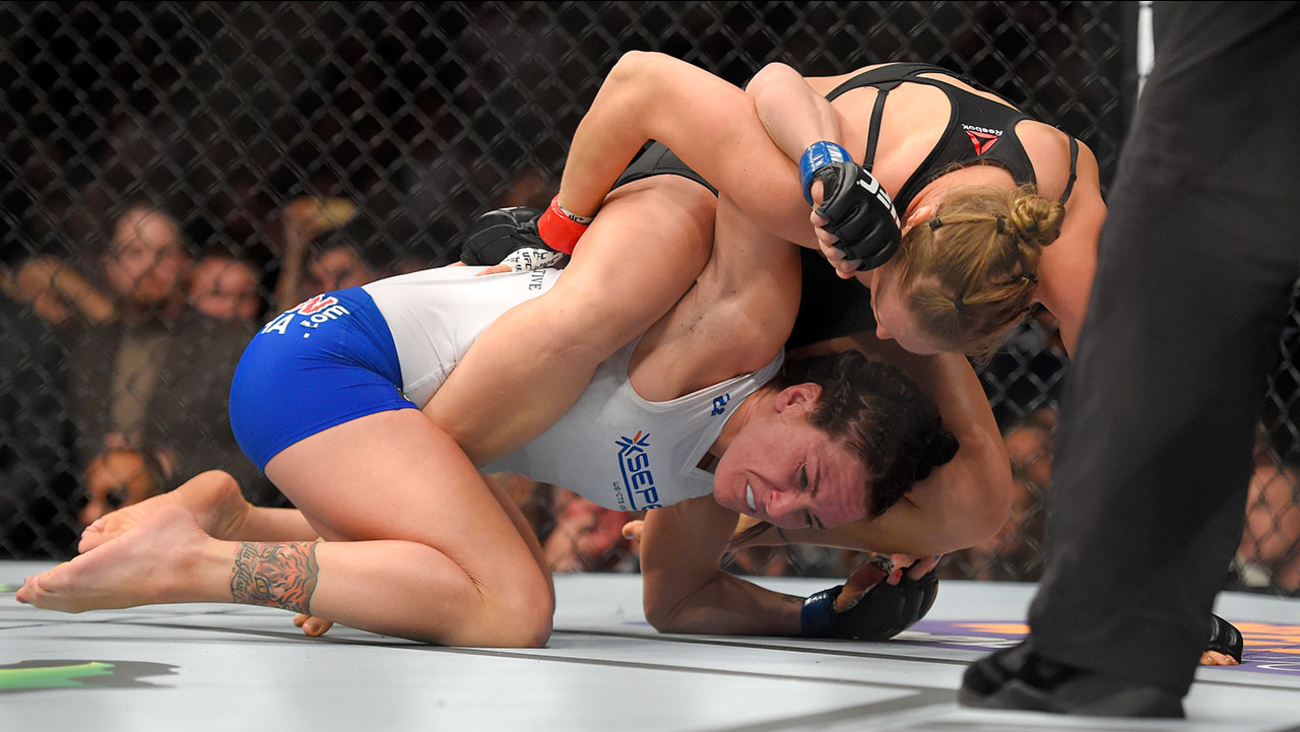 LOS ANGELES -- Ronda Rousey stopped Cat Zingano with an acrobatic armbar 14 seconds into the first round, dramatically defending her bantamweight title at UFC 184 on Saturday night.

Rousey (11-0) earned the most impressive victory of her career with jaw-dropping speed, taking out the previously unbeaten Zingano with her signature armlock from an unlikely position.

Rousey landed on her head after Zingano (9-1) charged her at the opening bell, but the champion gracefully flipped Zingano onto her back, got up and maneuvered swiftly into position to wrench Zingano's arm grotesquely. Rousey forced the challenger to tap out, ending her fifth title defense.

The sellout Staples Center crowd could scarcely process what it had just witnessed, but Rousey thought it all went to plan.

"We were expecting that she might come out and do something flying at me right away," Rousey said. "That's not usually how you land an armbar at that angle, but it works. ... It was a lot like judo transitions, where you scramble the second you hit the ground."

But the sellout crowd got what it wanted from Rousey, the Olympic medal-winning judoka who has become one of the UFC's most prominent fighters just two years after the promotion added women's bouts. Zingano was considered the most daunting active threat to Rousey's reign, but proved to be no match for the champion.

Immediately after the fight, Zingano was as stunned as the fans.

For the first time in UFC history, two women's fights headlined a pay-per-view event. Middleweight champion Chris Weidman originally was slated to fight Vitor Belfort on the Los Angeles card, but when Weidman's injury forced a postponement, the UFC promoted Rousey and Zingano to the main event without adding a major men's bout.

Although partly created by necessity, that spotlight is the latest affirmation of Rousey and women's MMA. Just two years after Rousey's debut, the UFC has two busy women's weight classes featuring more than 50 fighters - and Rousey is a movie star, a model and a celebrity who can sell out a large arena in her hometown.

Zingano earned this title shot two years ago with an upset victory over Miesha Tate, but personal upheaval delayed it. After a serious knee injury knocked her out of the matchup and a high-profile coaching spot opposite Rousey on the UFC's long-running reality television show, Zingano was rocked last year by her estranged husband's suicide.

The 33-year-old Holm (8-0) ended an 11-year pro boxing career in 2013 to concentrate on MMA. The Albuquerque native and former kickboxer went unbeaten through minor promotions before joining the UFC last year.

Holm did enough to win her UFC debut, but didn't blow away the scrappy, undersized Pennington (5-6). Both fighters landed big shots during a standup fight, and while Holm finished with a bloody nose, she left Pennington with a swollen left eye.

Holm could be the next contender in line for Rousey's belt later this year, and Rousey has said Holm's boxing credentials outweigh her lack of MMA experience. But UFC President Dana White has suggested veteran Jessica Eye will get the next title shot, and Eye demanded her turn in interviews before Saturday's show.

Although Los Angeles is the largest U.S. city that allows MMA competition, the UFC hadn't staged a card in the area since Rousey's debut with the promotion in Anaheim in February 2013. A mediocre card scheduled for Staples Center last summer was canceled when champion Jose Aldo was injured.