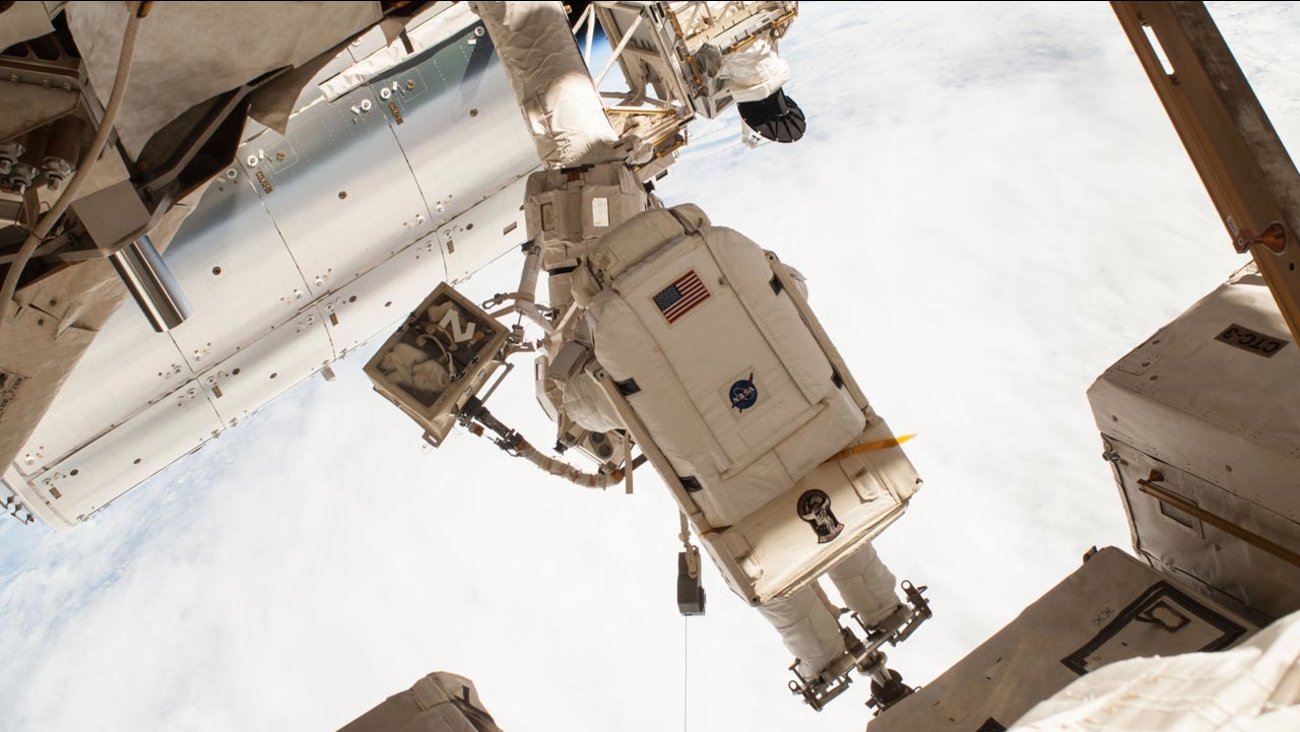 NASA astronaut Terry Virts is pictured here on a spacewalk as the Earth's surface passes by in the background on Wednesday, Feb. 25, 2015 (Photo courtesy NASA)

CAPE CANAVERAL, Fla. -- Spacewalking astronauts ventured out for the third time in just over a week Sunday to complete an extensive, tricky cable job at the International Space Station.

The advance work - involving nearly 800 feet of cable over three spacewalks - is needed for new crew capsules commissioned by NASA. A pair of docking ports will fly up later this year, followed by the capsules themselves, with astronauts aboard, in 2017.

American astronauts Terry Virts and Butch Wilmore had 400 more feet of power and data cable to install Sunday, as well as two sets of antennas. They successfully routed 364 feet on their first two excursions, on Feb. 21 and last Wednesday.

NASA hasn't conducted such a quick succession of spacewalks since its former shuttle days, and the amount of cable work is unprecedented. Even more spacewalks will be needed once new docking ports start arriving in June.

"Good luck, guys," Italian astronaut Samantha Cristoforetti said from inside as the spacewalk got underway early.

Within the first hour, the spacewalkers had hooked up both antenna booms and got started on the cable work. There were wires everywhere, and the men had to move their bodies in different positions to access one especially cramped work site.

Before approving Sunday's spacewalk, NASA spent two days analyzing a water leak in Virts' helmet that occurred at the end of Wednesday's outing.

A small amount of water got into Virts' helmet once he was back in the air lock and the chamber was being repressurized. Engineers concluded it was the result of condensation, and a safe and well understood circumstance that had occurred several times before with the same spacesuit. Virts was never in danger, according to NASA.

Wilmore's suit functioned perfectly during the first two spacewalks, but on Sunday morning, a pressure sensor briefly malfunctioned before he floated out. A mechanical gauge, however, was operating fine. Mission Control told Wilmore that he would need to pay extra attention to how his suit was feeling throughout the seven-hour excursion.

Wilmore is due to return to Earth next week following a 5 1/2-month mission. Virts is midway through his expedition. Russian Soyuz spacecraft carried them both up, with NASA paying for the multimillion-dollar tickets.