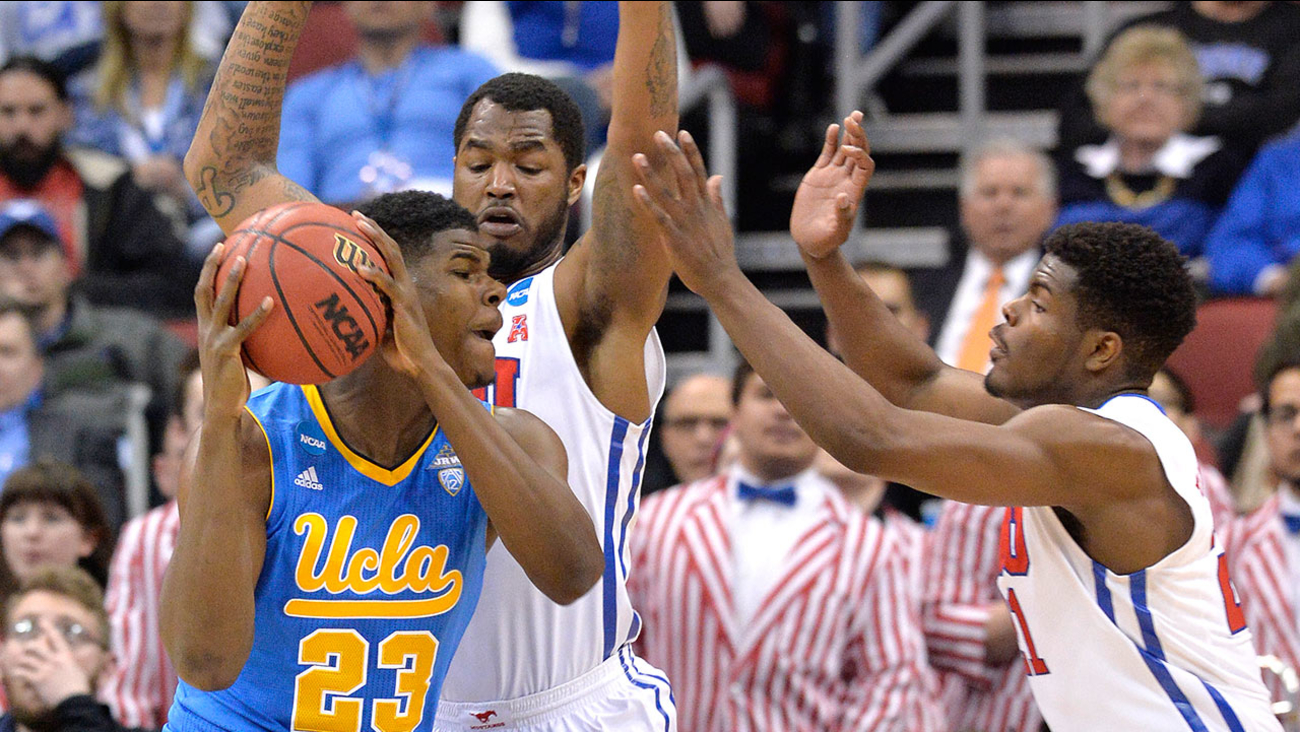 UCLA's Tony Parker, left, looks for an opening against SMU's Ben Emelogu, right, and Markus Kennedy during the second round of the NCAA college basketball tournament. (Timothy D. Easley)

LOUISVILLE, Ky. (KABC) -- Bryce Alford made four 3-pointers in the final 3:40, his last on a rare goaltending call with 13 seconds remaining, to push 11th-seeded UCLA to a 60-59 upset of sixth-seeded SMU on Thursday in the teams' NCAA opener.

Alford's points came on nine long-range shots but his last attempt was the most debated as his shot from the left side was touched by SMU's Yanick Moreira before it hit the rim. Officials awarded Alford, the son of coach Steve Alford, the basket, to the disbelief of SMU players and coach Larry Brown.

The Mustangs (27-7) had two shots to win in the final seconds, but Nic Moore missed a 3-pointer and then a 2-point attempt that sent the Bruins (21-13) into a wild celebration.

UCLA, the team many felt didn't even belong in the field of 68, advanced to Saturday's round of 32 against No. 14 UAB, an upset winner over No. 3 Iowa State.

However, the ending of this game had to be seen to be believed.

Before Alford's heroics, SMU's Moore, who had 24 points and six 3s, seemed destined to hold that title after three 3-pointers keyed a 19-0 run over 6 1/2 minutes to put the Mustangs up by nine.

UCLA leading scorer Norman Powell, who had 19 points, broke the run with a layup and added two free throws that were sandwiched between a series of Alford's shots from behind the arc as he finished 9 of 11 from there and 9 of 13 overall.

The Bruins' win was a fitting answer for critics of UCLA's record and tournament worthiness.

SMU's first tournament appearance since 1993 meanwhile ended with some players walking around in disbelief and others pounding the court in frustration and disappointment. The loss spoiled Hall of Famer Brown's first college postseason since leading Kansas to the 1998 title.

That it came against a UCLA squad he coached to the 1980 championship game before the Bruins lost to Louisville was even more ironic. Then again, the Bruins came in with something to prove and showed it even when the game seemed to slip away from them.

But nothing about Alford was shocking considering he made 4 of 5 from behind the arc for 12 first-half points to complement Powell's 11, earned mostly at the free throw line.

Moore kept SMU close with three long-range baskets on five attempts, but the Mustangs struggled to score inside the line (6 of 22) and made just 1 of 11 during a 5-minute stretch.

SMU began the second half even worse making just 1 of 12 over the first 10 minutes on Brown's layup with 14:09 left. That left the Mustangs down and nearly out with a 44-35 deficit with 9 1/2 minutes left before Moore made the first of consecutive 3-pointers to begin their huge rally.

UCLA: The Bruins shot 43 percent from the field including 10 of 20 on 3-pointers and outrebounded the Mustangs 34-33.

SMU: Markus Kennedy added 16 points and nine rebounds for the Mustangs, who finished at 36 percent from the field.