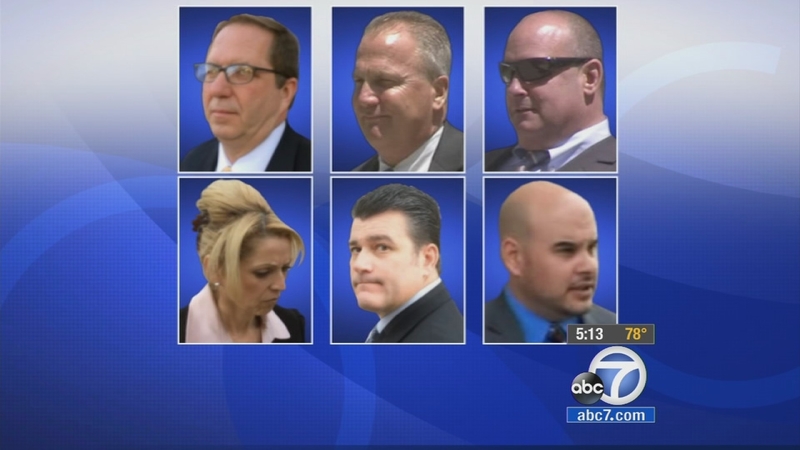 Judge Percy Anderson told the defendants their "blind obedience to a corrupt culture has serious consequences." Anderson berated the defendants for their "lack of courage to do what's right" and for refusing to show "even the slightest remorse."

The defendants will surrender to federal prison on Jan. 2nd to serve prison terms ranging from 21 to 41 months. The five men and one woman will each have to submit DNA samples as they prepare to enter the federal prison system.

"The defendants were supposed to keep the jails safe or root out corruption and abuse in the jails," prosecutor Brandon Fox told Eyewitness News. "Instead of doing any of that, what they decided to do was obstruct a grand jury investigation into abuse and corruption."

All six defendants were convicted in July of conspiracy and obstruction of justice for their roles in a plan to hide inmate-turned-informant Anthony Brown from the FBI and a federal grand jury in 2011.

Two defendants, Scott Craig and Maricela Long, were also convicted of lying to the FBI.

Retired Lt. Steve Leavins received the longest sentence, 41 months in prison. Anderson said Leavins believed he was above the law, pointing to Leavins' intimidation of witnesses and abuse of authority. Anderson also referred to Leavins' testimony as "highly suspect", not quite accepting prosecutors' contention that it was flat-out perjury.

Retired Lt. Greg Thompson will serve 37 months in prison and pay a $7,500 fine. Prosecutor Maggie Carter referred to Thompson's "massive abuse of trust" as the organizer and leader of the plan to hide inmate Anthony Brown from the FBI.

Retired Sgt. Scott Craig will serve 33 months in prison. Craig is a 26-year veteran of the LASD who took the lead in threatening to arrest FBI Special Agent Leah Marx outside her home. Craig also tampered with witnesses, telling one deputy he was being manipulated by the FBI and then ordering him not to talk to FBI agents.

Sgt. Maricela Long was sentenced to 24 months in prison. Long had just joined the Internal Criminal Investigations Bureau when this case got underway in the summer of 2011. Prosecutors say she was not a "leader" in the conspiracy, but nonetheless lied to the FBI and tampered with witnesses by suggesting to Brown he'd been abandoned by the FBI.

Deputy Mickey Manzo will serve 24 months in prison. Anderson noted that Manzo was deeply involved in the hiding of Brown and continued suspect activities months after this investigation came to a head. Prosecutors said Manzo's "feelings of loyalty trumped his duty to obey the law."

Deputy Gerard Smith received the shortest sentence, 21 months in prison. Anderson noted that Smith had worked in the jails longer than any other defendant and thus, should have understood the implications of an FBI investigation into civil rights abuses. Smith was the first person in the department to learn of Brown's connection to the FBI, telling Brown in one interview, "I know you're working for the feds, dude."

Attorneys for each of the defendants pointed their clients' long records of public service, community involvement and devotion to their families in their requests for shorter sentences. Long works with at-risk youth; Craig helped to start a non-profit aimed at preventing teen suicide; Smith is the primary caretaker of a child with autism; Manzo used to coach baseball; Leavins is a newlywed and the father of three teens; and Thompson is a devoted husband.

Defense attorneys also continued to cast blame on higher-ups in the department, including former Sheriff Lee Baca and former Undersheriff Paul Tanaka. In pre-sentencing paperwork, Thompson's attorney argued that sentencing enhancements should be "reserved for the likes of the Sheriff and Undersheriff as they were the true puppet masters of this scheme."

"Maricela Long, in her sentencing papers, said that she was abandoned by the Sheriff's Department and its leadership," says Miriam Aroni Krinsky, a former federal prosecutor who closely followed the trial.

"So certainly these individuals continued to try to point the finger higher up the food chain to indicate that they shouldn't be held responsible for orders that they were simply carrying out," Krinsky told Eyewitness News.

Manzo's attorney continued on that theme, telling the judge Tuesday his client's "loyalty was misplaced" and that Manzo will be "paying the price for the rest of his life."

Anderson didn't seem to buy it. He noted that all of the defendants claimed to be following orders from higher-ranking sheriff's department officials. But, according to testimony, those orders did not include directions to intimidate witnesses or threaten to arrest Marx.

"He felt that these individuals, as he put it, lacked the courage to stand up to those who were asking them to cross the line," Krinsky said.

"The defendants had a choice between right and wrong," Anderson said. "They chose the side of wrong. But not everyone joined them," referring to one deputy who stood up to intimidation and refused to commit criminal wrongdoing.

Deputy Tara Adams testified at trial that when three deputies asked her to alter booking records to make it appear that Brown had been released, she refused. When deputies told her it was an order from Tanaka, she told them to put it in writing.

"None of you had showed that sort of courage," Anderson told the defendants.